B is for: Machine Girl and The Abominable Dr. Phibes

While in the midst of writing my review for The Dark Knight, I decided that there was no need for such a piece to be written.  The market’s flooded with similar reviews, and in the end it boiled down to the fact that while there were aspects of the film I thought could be done better I still genuinly loved it.  That doesn’t matter, though, since anyone who even glances at the internet should know by now that the movie’s good.  So, I’ve decided to instead carry on with the next installment of my B-movie endeavors.

After digging through an impressive list of DVD’s that I’ve yet to view, a friend decided that the two movies I should watch immediately were Machine Girl and The Abominable Dr. Phibes.  The former seemed to be an over-the-top Japanese crazy-fest, the trailer of which I had watched on YouTube while the latter was one of Vincent Price’s classics that for some reason I hadn’t seen yet.  It was shaping up to be a fun night. 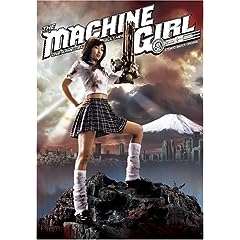 This movie is really, very difficult to sum up with mere words.  If I could only telepathically inject images into other people’s minds this would be a lot easier.  The trailer does a pretty decent job of throwing out random words which make up this movie; Yakuza!  Ninjas!  Tempura!  Sushi!  Flying Guillotine! Chainsaw!  Drill Bra!  Revenge!.  I added in the exclamation points, because each of those things are just that cool.  I could probably also add in a few more words such as; Bloooood!  Gun Arm!  Hattori Hanzo Spirit Possession!  Golf Clubs!.  There’s a lot more than that too, but I feel that if I go on with random words some people might become confused.

Does this film really have all that stuff in it?  Yes.  Dear God, yes.  Machine Girl is the culmination of all things that makes Japanese pop culture and horror flicks both amazing and freaking crazy.  For the majority of my viewing experience I felt like I was watching an anime piece turned directly into live action cinema.

The basic premise – with minor spoilers if you actually care – is that the main character (Ami) has a younger brother who’s bullied by a kid and his gang.  The bully’s father is Yakuza.  Eventually, the brother is killed by the bully, Ami finds out and is very pissed.  She has the hereditary ability to kick all kinds of ass (her parents were murderers), and seeks out revenge.  The Yakuza fight back and chop off her arm.  She then hooks up with another woman who lost her son to the Yakuza kid, and a machine gun arm is built for her.  Then comes more revenge.  Along the way, all those words that were stated earlier occur en masse.

The movie doesn’t take itself that seriously, which is a major plus.  The special effects are specifically done to elicit a laugh.  Every time an appendage gets chopped off (about once every three minutes) a geyser of blood spews forth for a good thirty seconds.  Besides the limb choppage, it was incredible to enjoy every single person in the film who died meet their end in a new and unique manner.  I want to see more films by director Noboru Iguchi because if they’re all this fun then I’ll be a happy camper.

The bottom line is that anyone who enjoys a lot of campy gore, Japanese insanity, more gimmicks than you could ask for, and an overall good time should go on amazon.com and buy this film.  I’m not kidding.  You won’t regret it.

The Abominable Dr. Phibes is a Vincent Price cult classic and way ahead of it’s time.  This movie is Saw before there was Jigsaw Killer.  It’s Se7en almost twenty-five years earlier.  Sure, the budget and special effects aren’t the same but there’s near-identical plot elements.

The premise (again, minor spoilers); People of the medical profession start dying in rather strange ways.  Scotland Yard detectives start to piece together the evidence, and discover the M.O. relates all of the strange deaths to the ten Biblical plagues brought about upon Egypt.  The victims also seem connected; they all were involved in a case in which the wife of Dr. Anton Phibes met her end.  Dr. Phibes himself was believed to have died shortly thereafter in an accident.  As it turns out, he’s not quite dead and is enacting his revenge through some very creative murders.  And he also seems to have an automaton (or demon) who looks like his wife helping him.

The ridiculousness of the movie lies within the ways Phibes conducts his murders.  Each and every one relating to an Exodus plague (which may or may not actually be in the Bible, and occur out of order) seemed like an excellent plan until the viewer actually thinks about how Phibes actually pulls the gimmick off.  Case in point; one of the victims is being held in protective custody within the police station where presumedly Phibes can’t get to him.  He’s safe until the detective’s open a door at the very same moment a copper bust of a unicorn’s head flies through and impales the victim.  This represents the “plague of beasts”, of course.  Apparantly, the unicorn bust was catapulted from across the street of the police station, through a window, and into the victim’s body.  This was a very cool way to go, until one considers the implications that Phibes must be a mathetical genius in the areas of probability and geometry.  How did he know exactly when the victim would appear in the doorframe?  How did he get the unicorn bust’s trajectory perfect without any trial runs?  Where did a bust-flinging catapult come from?  None of these questions are answered, but that’s all part of the movie’s charm.

There’s some more ludicrous deaths (one involves brussel sprout paste, a deep sleeper, and anti-flesh locusts) which contribute to a rather amusing cinematic viewing.  The Saw precurser involves a key hidden within someone’s body while a device counts down toward a messy end.  The film’s worth watching if just for each and every death scene.

Fans of modern or classic horror movies should check out this one, if only to place homage done in newer renditions.  It’s not a laughing fest of a B-film, but its enjoyable through-and-through.  Price is an iconic villain, any time, any place.

That’s all for this time around.  Stay tuned, as I’m going to be screening Hamlet 2 on Tuesday, July 29th and should have a review posted on Wednesday, July 30th.  Over and out.