Years ago two brilliant, yet criminally overlooked media scholars (me and my Dad) devised a theory. They theorised that all films, regardless of genre, should, at their most base level not only engage but entertain the audience. They called it The Happy Gilmore Effect.

For those of you who don’t know, Happy Gilmore is a cinematic masterpiece. A warm and touching sport biopic that deftly charts a man over coming personal and professional obstacles to achieve an insurmountable goal while examining the fickle nature of celebrity and the psychological impact of losing a father.

It also includes the following exchange…


A film will obviously fail entirely if it doesn’t engage, but only a handful of pictures achieve that alchemic reaction that Happy Gilmore accomplishes and truly entertain. It doesn’t just have to be a comedy. A thriller should thrill, a documentary should inform and a romantic comedy should, well, do whatever it is they do. Happy Gilmore was used as a yardstick to measure if a film succeeded in this regard. There were some successes, some noble attempts and some failures. As the months passed and their research grew they made a startling discovery, The Happy Gilmore Effect led to an earlier theory by the esteemed media historian Professor Reginald Bubblepants called The Emperors New Clothes Syndrome.

As you would expect films suffering The Emperors New Clothes Syndrome are typically films that people tell you are brilliant. Oscar bait if you will. Early reviews will heap token accolades (taccolades) onto the film in an attempt to perhaps preempt the swell of critical gushing lest they be in the minority. Films with TENCS are typically released by well respected directors “returning to form” or perhaps deal with a touching subject “that will melt your heart and reaffirm your love for life”.

It takes a real hero to stand up and say “Actually, it was a bit crap.”

When it became apparent that there may be a connection between The Happy Gilmore Effect and TENCS the research was combined and the results were staggering. 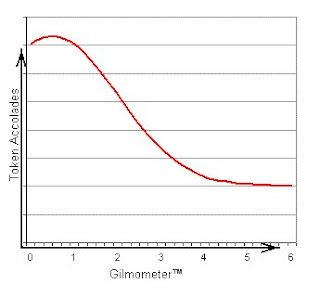 The above graph displays quite clearly the incredible correlation between the Token Accolades given and the rating on the Gilmometer. Note how, on average, the fewer the taccolades the higher the rating. Had this research seen the light of day the landscape of modern cinema would be very different, but alas, when these two unsung heroes presented their findings, they were ignored by the masses and shunned by their peers.

Well, they are shunned no longer! I intend to honour these brave souls who refused to be quiet and swallow spoon fed opinions. To celebrate their controversial yet vital work I will be applying their patented Gilmometer to my future film viewing, each film will be granted “Happy’s out of five”.

I invite you to do the same. Rewatch a favourite of yours, a film you consider perfect, with this new theory in mind. If it still places high on this new yardstick, well then, you are watching a true masterwork.