Four Movie Books That Should be Documentaries

I love movies, and I love books, which means I love books
about movies most of all. And the only thing better than a book about a movie
is a movie about a movie. I don’t often purchase documentaries, but my sizably
stupid video collection does feature a number of film specific documentaries,
which I tend to re-watch (not counting a number of solid behind the scenes and
retrospective documentaries that are available as extra features on other DVDs
and Blu-rays). The American Nightmare, an all to brief look at post-Vietnam
horror cinema, A Decade Under the Influence and Easy Riders and Raging Bulls,
both concerning the ‘silver age’ of American filmmaking, Inside Deep Throat,
and This Film is Not Yet Rated, all remain favorites. More recently Not Quite
Hollywood, a look at Australian exploitation films, managed to rival every
other documentary I saw in 2009.

Late nights have brought about revisits of both my favorite
books about movies and my favorite movies about movies, and I’m left noticing
that most of these books would make great movies. What follows is my personal
dream list of future documentary subject matter. 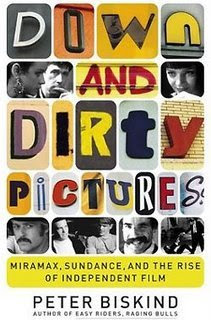 Down and Dirty Pictures: Miramax, Sundance, and the Rise of
Independent Film

Author Peter Biskind had already stirred up plenty of
controversy with Easy Riders and Raging Bulls, but the bulk of the people
covered in that particular book were old enough to look back with a reasonable
sense of nostalgia. With Down and Dirty Pictures Biskind aimed his brand of
sensationalistic film history at the still active Independent Film movement,
and he pissed of some very powerful people. It’s not the best book, and like
Easy Riders and Raging Bulls it loses much of its narrative to catty little
fits of gossip, but the basic bulk of the book is a fascinating look at the
downside of some of the best films of the ‘90s. In a perfect world the
Weinsteins would actually agree to tell their side of the story for a film
version. This particular film could easily be better than the book because the
Weinsteins’ story has finally come to an end. When the book was finished they
were still moderately successful, foreign film editing machines.

Jake Rossen’s written history of the Man of Steel’s rough road to radio,
television and film is a quick read, and crosses over into impossible to put down territory once the facts
of Tim Burton’s failed Death of Superman come to light. A film version would
likely focus more on Superman’s big screen antics, and if interviews could be
arranged I believe every major participant is a big enough personality to
produce some major belly laughs. Kevin Smith’s side of the story alone has made
for hours of entertaining anecdotes, but imagine confronting the notoriously nebbish Tim Burton on screen,
or even a few words the parade of actors once marked to play the role of Clark
Kent. The Holy Grail would, of course, be the possibility of someone getting their hands on the fabled Death of
Superman test footage.

Killing for Culture: Death Film from Mondo to Snuff

I have very little interest in actually watching Mondo or
Death Compilation videos, but the genres are made fascinating by authors David
Kerekes and David Slater, who cover the histories, content and social impact of
the films. There are some documentaries made on the subject, mostly in the form
of DVD extras, like The Godfathers of Mondo (which was part of Blue
Underground’s Mondo Cane collection release), but these mostly cover specific
films, not the encompassing arc of the genre, and doesn’t explore the effect it
had on traditional narrative films. A direct adaptation of Killing for Culture
would also cover the chapter that disproves most of the most famous real death
myths (spoiler: Faces of Death is almost all faked), the controversy
surrounding 1976’s release of Snuff, and the Japanese made Guinea Pig films. A
film version could also be valuable for people like me that don’t have time to
sit through most of these films, and would rather just catch the choice bits in
clip form.

Kerekes and Slater also wrote this epic on the subject of
the 1980s British ‘Video Nasties’ craze, which saw the banning of dozens of
goofy, harmless horror films, and lead to real prison sentences for some
offenders (compare simply owning a film to pirating a film, it really puts things in perspective). The book is so involved it might actually make a better mini-series
than standalone film, but one could easily cut the review section. I’ve been
needlessly obsessed with the phenomenon over the years, but I think the book’s
mix of political and personal issues, coupled with footage from the films
themselves (which proves shocking on occasion, but usually comes across as far
too silly to ban) would prove interesting and entertaining for film fans
everywhere.