The Horrid Truth: The Most Exciting thing ever!

Here’s something that may shock you, CHUD is an American website. This has it’s pros and it’s cons. Pros; the writers get a lot of interviews and exclusives with a lot of really cool, and exciting people in the film industry. Cons; I never goddamn get to talk about cricket.

Ever since I got this little podium of a Chud blog, this is what I’ve secretly wanted to talk about. In my first blog when I was ranting about people leaving “sport games” early, did you really think I was talking about Baseball, or football, or rugby? Fuck no, leave whenever the hell you like, I’m not your babysitter. Blog 2 when I’m all like “wasn’t Into the Wild great? You should all go climb mountains”, what I really meant was “sit on the couch and get fat watching cricket on an obscenely large T.V”.

I loves me some cricket. People say cricket’s boring, thing is everyone says every sport is boring, cricket just happens to be the only one they’re wrong about. 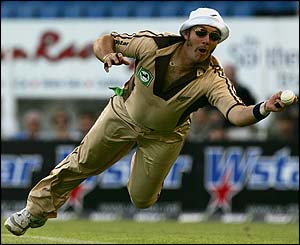 There are two big problems that face cricket, one is it’s carried it’s reputation as a slow paced sport ,over from the old days when every game lasted five days, and the amount of runs scored was low. The modern game is so far removed from that it’s not funny. In the 70’s a one-day version of the game was introduced, and the game has gotten steadily more fast paced ever since. Even going back and watching a game from the 90’s seems interminably slow compared to a game now. And a few years back they introduced a format of the game called 20/20, that lasts 3 hours. I know that’s about the length of a baseball game and people complain about the length of baseball games, but fuck those people I’m not a huge baseball fan, but if it’s a good game I can enjoy it, and honestly 3 hrs is really no big deal. To me the difference is baseball has always been roughly that long, cricket having started out a 5 day game then being compressed to 6hrs then being compressed to 3 means it’s packing an awful lot more into those 3hrs, I’m not here to compare baseball and cricket though*, that only makes enemies and puts people off.

The second major thing cricket has going against it, is that it’s a complicated game. I’m not going to try and say it’s not, but it’s mostly complicated by arcane terminology as opposed to an actual over abundance of rules. It does have a lot of fairly complicated rules, but not a whole lot more than a lot of other sports, it’s just that in order to explain them to someone every second word you need to use is a weird ass word that doesn’t exist outside of a cricketing rule book. I mean, I have a cricket game on my cell phone that only uses the Dpad, in essence cricket is kind of simple.

To me what separates Cricket from all other sports is variety. When it comes to batting, you’ve got power hitters, but also guys that are all about technique and timing, and finding gaps in the field, other guys are all about inventing shot’s that no-ones seen before in order to hit the ball to areas of the ground that aren’t protected.

With bowlers it’s the same, you’ve got guys who bowl fast and throw in changeups and curveballs, and seamers (biggest difference between bowling in cricket and pitching in baseball aside from the action and the run up, is that in cricket 9 times out of 10 the ball bounces once before making it to the batter. Seaming is getting the ball to move left or right by getting the ball to land on it’s raised seam in a certain way), but you also have spin bowlers who bowl a lot slower but with a flick of their fingers or wrist impart extra revolutions on the ball to get it to turn as it bounces, left, right, up, and down, while trying to disguise the flicking motion so you don’t know which variation is coming.

With all the extra rules and stuff comes nuance. Cricket is ultimately a game of batter vs. bowler, but there’s a lot more strategy involved than in most sports, a Cricket field forms a complete 360 around a batter, he can hit it anywhere he wants and get runs, so a fielding captain has to put his fielders in what he thinks are the best positions to stop runs and take catches, and if that’s not working then find a new strategy and set a trap for a batter. Then it becomes a game of cat and mouse, can the batter counter the trap and find weakness in the field setting, and exploit it?

It’s this mixture of big hitting, and wheels within wheels strategic thinking, that makes it next to impossible for me to become bored watching 2 decent teams play cricket.

I’m not the best cricketer in the world, I used to be much more of a try and find the gaps in the field type of batter, but lately I’ve been working on becoming more of a power hitter and it turns out hitting things really hard is fun.
I love how when you’re fielding it’s a team sport but when you’re batting it’s all about you vs. the bowler. No matter how stressful a week I might of had and how much stress is waiting for me when I get home, for that sweet blissful period of time when I’m out there, all life’s complications melt away, it’s just me vs. him he’s trying to get me out, I’m trying to hit the ball back over his head a very long way, it’s simple, it’s perfect.

So many great memories watching cricket too, both at the ground, and on T.V. I remember being a youngster during the 1992 world cup held jointly in NZ and Australia. My Dad and I went to a NZ vs. Pakistan game. Before the game the players were on the field practicing and warming up, Martin Crowe (then NZ captain, currently douche bag) Hit a ball up in to the crowd while practicing batting (side note cricket because of how much of an influence the condition of the ball plays on the game is still played like the dead ball era of baseball, if the ball is hit into the crowd you have to return it. it seems unlikely but I’ve never seen a ball stolen, this is probably because the rest of the crowd would beat you up and throw the ball back anyway) the dude who caught it, went to throw it back but his arm was shit and he hit my dad in the back. Dad quickly grabbed the ball and stuffed it in his bag, everyone was confused as to what happened so he got away with it.

Lookie what I still got.

The match I was mostly referring to in my very first blog was a home game featuring NZ vs. Australia in 2006. About half an hour before the end of the game everyone had given up on us and started leaving. Like I said before, the thing about everyone is they don’t know what they’re talking about. The amount of runs we needed with the amount of time left was large granted, But out in the middle batting were Brendon McCullum and Daniel Vettori, Brendon being on e of the most aggressive hitters on the planet and Dan an expert at squirting the ball into gaps that most batsmen would find impossible. As long as those two were out there I knew we were still in the game, and I was right we ended up beating Australia (Forget your Yankees/Red Sox, there is no greater sporting rivalry than NZ/Australia) Those who had remained to witness the miracle win let out a cheer more than ample to make up for those who had whimpered out of the stadium early. It was the release of over an hours worth of nigh on unbearable tension mixed with adrenalin, it was glorious. I wish I could go back to that moment and relive it again and again.

My Favourite TV memory ever was the next year. Again it was the NZ Blackcaps vs. Australia, this time it was the final game of a three match series, We’d already won game 1 and 2 which was massive What makes the NZ Aussie rivalry so great especially from our side is that we’re always the underdogs, Australia is a gigantic juggernaut of cricket, and we it’s tiny closest neighbour, so our wins are rare, our series wins are almost unheard of, and this was our chance to not just win a series but to win with a clean sweep. It had never been done before, and this was our last game before the world cup, so we desperately needed the momentum.

Australia came out and set a massive total. When it was our turn to bat we got off to a really bad start, we were keeping up with runs, but losing way to many batters getting there. Then out strode Craig McMillan a guy who had been great in 2000 to 2002 but since then had lost his form and had been in and out of the team for the remainder of his career. The Night was his, he broke the record for the least amount of balls faced (67) to score 100 runs. Eventually the Aussies got him out, then it was left to Brendon McCullum and the tail end of our batting line up, which was pretty much all specialist bowlers, who really couldn’t bat, to save the game. Then the retarded happened as one of our crap batsmen almost accidentally smashed 28 runs. He was just trying to keep the Aussie bowlers from hitting his stumps and getting him out bowled, but every time he did the ball would catch the edge of his bat fly away at an awkward angle backwards and

get 4 runs (if you think of a cricket field like a sumo ring, if the batter hits the ball and it roles or bounces out of the field of play it’s an automatic 4 runs, if it leaves the field of play without touching the ground first it’s an automatic 6 runs). The Aussies eventually got him out, so it came down to McCullum and Jeetan Patel our last and worst batsmen, if they got one more batter out Australia win, if we got 8 more runs we win, we had 7 balls left in the game to do it. First ball we got 1 run, so it became 7 runs off 6 (I’m doing the maths for you because if you’ve read this far down your brain is probably pulp by now) next ball McCullum launches it out of the ground for 6. Scores tied 5 balls left. Next ball hits McCullum in the leg, no run. Next ball lifted over the infield by McCullum ball runs away for 4 we win.

It was unbelievable, no scripted TV drama has come close to eliciting that many different emotions out of me. We didn’t just win a series against Australia we kicked their ass 3-0. I have the highlights of that series on DVD I still play it maybe 4 times a year. I always enjoy it. It wasn’t just a win it was reward for years of staying loyal to a team when seemingly no one else would.

As my gift to you, please enjoy the final moments of that game


*Because if I did cricket would win by a truly epic margin, and then you’d get all pissy at me.