The Horrid Truth: The Making of a no budget movie pt2

There is a document on my computer, The first page of it reads: Everybody Loves Murder.- 2nd draft.- December 4th 2002

This is the shooting script for what was/is to be my first attempt at making a feature length movie. As we say goodbye to December 2009 it’s still not done. Holy shit, I’m going to shoot myself.


I’m going to try and chronicle the making of the movie as accurately and best as I can from my less than stellar memory. Hopefully it will be somewhat entertaining, and maybe even informative to those looking to make a movie with little to no money or resources, it should at least give you an idea of what not to do.

As I mentioned in Part 1 we had some casting problems these did not disappear once filming began. The actress that was going to replace “chick with morals” had moved to Wellington, but I had already quit my day job, so there was no time to wait around until we could find a second replacement, which meant ploughing ahead without one of the major roles being cast. Also one of the other actors got a book publishing deal, and moved to England. I’m going to go slightly off topic here for a second and tell you a story about that guy.

His name was Mihajlo and outside of his initial audition I only had one meeting with him. He actually rang me and asked if I could meet him in a bar to go over the script and his character etc. which I took to be a good sign that he was taking the character and the project seriously. He was from South Africa, but was of Serbian descent. He had an almost John Wayne like larger than life quality which is what made me hire him in the first place. When I got there he was with a tough looking guy wearing a black beanie and with a neck full of tattoos. Mihajlo introduced the guy to me and told me he was a really great poet, and got the guy to recite a poem. I honestly don’t remember if the poem was any good I just remember being a very nervous young director as it was and the kind of WTF? situation being very off putting. Over the course of the conversation we got onto Mihajlo’s background and I wanted to share one story in particular because I think it’s an important one and the type of sad thing that should be heard.

Because of his Living in South Africa with his Serbian parents he was hired by the UN as a Translator during the Bosnian war. When he got there though he found he was hardly ever used as a translator and was instead given a paper medical mask a pair of bolt cutters and a pair of pliers and put to work in the aftermath of battles removing jewellery and pulling gold teeth from corpses from both sides in order to offset the costs of the insurance companies who insured the lives of Bosnian Soldiers. He said one time the smell was so bad, and the sight of the killing fields so repulsive that he threw up into his rudimentary gas mask. When he got his pay that month there was a $5 deduction for the cost of replacing the mask. I’m not going to make any statements about war or corporations I think the story pretty much speaks for itself.

So anyway Mihajlo left, which was a major blow to the production, but I don’t begrudge him what was a great opportunity for him.

The Next two to go were fired; the first guy was just completely unreliable. It was no easy feat in this day and age when virtually nobody works a routine 9-5 Monday to Friday week to get everyone needed for a scene at the same place at the same time. When finally after weeks of back and forth and phone tag I was able to accomplish this we’d inevitably end up waiting around for him to show up, I’d give him a call and he’d always have an ever worse excuse for why he couldn’t make it. First came “my friend broke his arm and I have to wait with

him at the hospital” then “I went to a party last night and I’m too hungover to remember lines” then ” oh shit I forgot, um we can have the scene done in 15 minutes right? If so I can maybe do it but I got plans” that last one we were shooting a restaurant scene, at a restaurant I only had for a day, that was a 20 minute drive to get to, so yeah 15 minutes was no problem.


The other chick that I fired… well this, I sort of feel bad about, because well she sucked, and I wanted to get rid of her anyway, and then she bailed on a shoot because she had morning sickness, and I really wasn’t prepared to have to film around a pregnant chick when I thought she was a bad actress anyway… So yeah I fired a chick for getting knocked up, not my most gallant moment, but by this stage I’d had so many set backs I went into a “you’re helping me make my movie or you’re being an obstacle” mode, and if you were the latter you got left behind.

Also if we’re counting Karma points, I gave another actress a job largely because she was pregnant and I did need 1 pregnant chick. She also had the benefit of being able to act, though.

At the time all this messing around with recasting was driving me nuts the movie had made barely any progress as it was and each time a role needed to be recast it meant the scenes we had shot needed to be redone so we were actually moving backwards. In the long run though, every single recasting proved to be a giant blessing in disguise.

In the pivotal role of Daisy we bumped Tracy an actress who was playing a more minor role up to the part, and I can honestly say I can no longer imagine anyone else in that part. She was also part of a stable of stage actors who we got to fill in all the other vacant spots and every one of them excelled. And all the scenes that had to be reshot benefited greatly by me having that little bit more experience, and confidence behind the camera.

That’s one of the biggest things I learned making the movie is that no matter how prepared you think you were starting out on your first movie, the amount you learn through doing is staggering. I’m pretty sure if you were to edit the movie together in order of when we shot it you’d see an obvious improvement in direction as it unfolded. As long as it’s taken to this point to get it done, a small part of me wishes I could start all over again from scratch and use what I’ve learned in the process of making it.

You’ll encounter some weird problems on set. One oddity was and older actor who showed up having supposedly memorised the wrong scene. (I say supposedly because I have the sneaking suspicion he had actually just not bothered memorising his lines and this was his excuse) and for the life of him he couldn’t memorise them on set, so he tried a memory technique where he would pick things around the room and attribute line to them, so the vase on the mantle would be line #1, the clock would be line #2 and so forth. If an actor ever tries this tell him to fuck off because what you get is an actor blankly looking at a vase, then a clock, then a so forth.

Another actor was I would estimate around 38 years old and had never driven a car before in his life, this posed a problem for the scene because he had to drive down a country road, and it posed a problem for me because I was going to be on the hood of the car shooting the scene. I gave him very simple instructions Drive slow, Stay on the road, do not break suddenly. 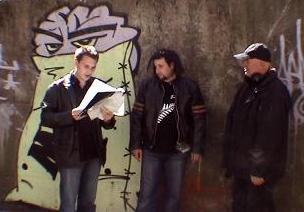 I haven’t really gotten into why the damn movie has taken so long. The first mistake I made was just flat out


naivety I thought it was going to take six months and that was just never going to happen. A big part of the problem was that while I had quit my job to free up my schedule, you can’t expect your volunteer actors to do the same so I ended up mostly only able to shoot one day a week, so say you’re only getting about a minutes worth of footage that day that means for a 95 minute movie you’re looking at 95 weeks when you factor in reshoots and all the scenes that didn’t make the final cut it’s more like 120 weeks, then you have to factor in burn out, it’s incredibly hard to stay focused and motivated on one project over that long. Even more so for the actors who have no real personal stake in the project, so the longer it goes on the less it takes for them to blow off shooting to go do something else, in turn you start getting fed up with dedicating all your free time when nobody else seems to be bothered, you start questioning you worth as an artist, and the worth of the project. Money is another huge factor, I was able to stretch my six month living expenses budget to a year, then I had to sell my car which bought me another six months, then I had to get another job, which made filming impossible, so for about 4 years I lived in a cycle of work/save for six months then quit and work on the movie for six months. I’m also tremendously bad at time m

I’ve rambled on enough probably, but there’s one piece of advice I will leave you with. If there is something you need, ask for it. I have been amazed at the generosity of ordinary people. The number of times I’ve seen a location I needed, gone in asked the people if I could use there premises for shooting and they’ve said yes is unbelievable, I actually don’t think I’ve been turned away once. I want to make special mention of one of my actors, Dave Cathro, I used up so much of his time and he never complained, he let me use his, house as a location, his car as a prop, he got in contact with a car enthusiast friend and got me the use of a cherry red 1958 Chevy that had been retro-fitted for drag racing. He’s a top rate guy all round.

Ok See you next time with part 3: post production.