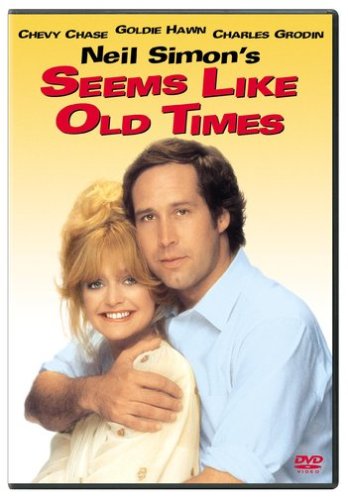 The Joey Gist:  Though my father and I bonded mainly on blood and boobies, every so often he would walk up from our basement, where he improperly stored several hundred videocassettes containing the several hundred movies he’d obsessively tape from HBO and Cinemax regardless of quality, and say, “Son, I think you’d like this.”  Sometimes he was off–very, very off: what seven year old kid, even one as precocious and empathetic as I, was going to sit through Being There or The Manchurian Candidate?  But sometimes he hit the nail on the head, and Seems Like Old Times immediately became a favorite of mine, one of those movies I’d furiously look for the in the monthly cable guide so I could circle the air dates, and on a month when it wasn’t being shown, few other movies could chase away the blues.  Even though we had a VHS copy nearby.  Yeah, I know.  I was pretty cray cray.  Anyway, for this movie, I don’t remember the first time, but I always look forward to the next time.  (Ba dum cha!)

The Film’s Gist: Oh boy… (deep breath)  Ready? Okay. So, Chevy Chase plays Nick, a failed journalist living in the deserts of California who, as ridiculous, improbable luck would have it, gets kidnapped out of his own home by two creepy criminals.  They drive Nick into town, pull up to a bank, and force him to rob it.  The crooks get the money, Nick’s face is plastered all over the security cameras (and subsequently the news), and then, in one of the most dickheaded things I’ve ever seen two pussy-thieves-who-can’t-rob-their-own-bank do, they push Nick out of a moving car!  Down a hill!  A big one! Anyway, Nick is injured and on the lam, and can only think of one place to go: his ex-wife Glenda (Goldie Hawn)’s place.  Problem is Glenda is now a prominent defense attorney in Beverly Hills, and she’s remarried to an even more prominent district attorney (Charles Grodin, playing a guy named Ira–I know, sucks, right?) who is running for a major political office.  Since Glenda is guilt-ridden bleeding heart (in a running joke, she routinely defends young minorities accused of petty crimes, then hires them to work for her so they’ll stay out of trouble, and then they steal from her, and she’s back in the courtroom getting them off) and she still has a soft spot for Nick’s adorable chin-butt, she agrees to let him hide in the guest house.  Naturally, mayhem and hilarity ensue, and everyone is charmed for the next 100 minutes.  Swoon.

What I Thought Then:  1) Goldie Hawn looked like someone kissed Tweety Bird and (s)he turned into a princess.  2) If Yvonne Wilder didn’t receive an Oscar for her mesmerizing–but by today’s standards mildly offensive–performance as Glenda and Ira’s sassy but sometimes difficult to understand Puerto Rican maid/cook Aurora De La Hoya, then how did anybody?

What’s Still Good:  This movie puts a smile on my face from start to finish.  When people sigh and say, “They don’t make movies like they used to,” Seems Like Old Times is the kind of movie they are nostalgic for.  It’s spotted with remnants of old Hollywood pictures, with its melodramatic but sweet Cinderella-at-the-ball score, the sitcom-esque progression of the increasingly kooky script, the way the actors deliver their lines, even in the most outrageous of moments, with impressive restraint, doing more with their eyes in service of the film’s humor than can be accomplished with gay jokes and CGI animals humping/attacking people.

And, as I often celebrate in the movies I choose for this blog, you can always tell under the brim of things that the actors are having the time of their lives. Being in a Neil Simon-scribed movie back then was no small potatoes, Chevy Chase and Goldie Hawn were at the start of their heydays, and they have such fantastic chemistry that when watching it, you think, “This is it.  This is how I always want to remember them in my mind.”  I promise, it will help you wash away the haunting memories of every National Lampoon Vacation movie post 1989 and, ahem, The uh, Banger Sisters.  Watching Goldie in this film, you also receive confirmation that daughter Kate Hudson is absolutely, positively trying to recreate her mother’s classic romantic comedy era, and absolutely, positively failing at an alarmingly fast and embarrassing rate.

Finally: It’s got TK Carter in it! As a thieving, drinking-on-the-job, wisecracking chauffeur!  And as someone who felt a sense of calm and comfort turning on not one but two of his favorite shows (Punky Brewster and Good Morning, Miss Bliss) and seeing Mr. Carter there, I believe you simply can never have enough TK in your movie.

What’s Not So Good:  As with so many of the movies that I love and stick up for on this blog, Seems Like Old Times‘ weaknesses are tangled up in its strengths. The film is often trying to do too many things at once, mainly with whatever commentary Simon and director Jay Sandrich were going for with the very real and pulsating racial stereotyping happening throughout the film.  I mean, when I say that Glenda is defending minority after minority, we’re talking constant young Latinos, blacks, and Native Americans strewn about the film, alternately pissing off and guilting Ira and Glenda,  In rewatching the film, I’m just at a loss for what was being accomplished with this.  Now, I’m no wallflower, and I love offensive jokes more than anybody–honest, Strangers with Candy is an all-time fav, and I don’t think I raised an eyebrow once during Bruno–but some thirty years later, it’s all one big head scratcher. It’s especially difficult to critique this since the absolute funniest moment in the film is when Aurora has to march into court during Nick’s arraignment (minor spoiler, but you’d see it coming anyway), explaining her tardiness to the judge that she “hadda getta mah feet uh screpped.”  She then performs one of the most memorable monologues in film history, I think, (I suspect Maris Tomei watched this a few times in preparation for her standout scene in My Cousin Vinnie) but for the life of me I can hardly remember most of what she even says, because it’s so buried under her thick accent that you can just imagine some Repub wingnut catching it while flipping through the channels and shouting “If you’re gonna be in this country, LEARN ENGLISH!” So, yeah, I really love that scene, but I’m sure it sort of makes me a bad person one way or the other.

There are also like 25 dogs in this movie.  Seriously.  Glenda not only takes in stray minorities, but also stray dogs.  Every one she finds.  And they all sleep in bed with her and Ira, and every time she gets up, or a doorbell rings, or Ira raises his voice, or Aurora is in the kitchen, a battalion of pups comes stampeding through the house. I love dogs, and I love dogs in movies, but again, it’s a chaotic layer that often disrupts and clutters.  And the scenes with the dogs are cute, but frankly not all that funny.

Finally: poor Charles Grodin.  This is like the most thankless role ever.  He’s just such a douche in this movie.  Even when he’s right.  Even when we should be feeling sorry for him and all the trouble Nick and Glenda are causing for him–we just don’t.  Because he’s Charles Grodin, and even in his most flattering early 40s, he has an incessant scowl and creepy grin that makes you think he’s gonna sprout green teeth, turn into a ghoul, and bite your throat out.  And he plays a DA.  Named Ira.  Did I mention that?  Yeah.  Sucks to be him.

The Current Gist: I loved it then, I love it now.  But it also makes me kind of sad, because something has very noticeably shifted in the way films are written and executed these days.  Seems Like Old Times always reminds me, appropriately, of, well, old times, when movies came out at a far less rapid rate and that seemed to ensure some measure of genuine that you so rarely see (and feel) these days.  And it reminds me how lucky I was to have a father who knew which movies to record over and which were important enough to snap off the little black plastic square at the corner of the VHS cassette.