My Favorite Slasher Movies : The Mutilator

Introduction: Some film genres are obvious. If you’re watching a film that
takes place in the American West, is staring an international cast (likely all
dubbed), and was filmed in Spain by a largely Italian crew, odds are that you
can stack that film neatly into the Spaghetti Western (or Euro Western, for you
PC police) genre. Most film genres, however, are hard to fully define, because
movies either mix elements of varying genres (like Ravenous), or are simply too
‘different’ to manage a definition (like Santa Sangre). The Slasher genre
arguably officially started with North American slaking killer flicks like Bob
Clark’s Black Christmas and John Carpenter’s Halloween, but were more directly
defined by Sean Cunningham’s Friday the 13th. Some fans and critics
count films like The Texas Chainsaw Massacre, I Spit on your Grave, and
Profondo Rosso in their Slasher genre wrap-ups, but most of these movies,
despite obvious similarities to the adventures of Michael Myers and Jason
Vorhees, really fall more nicely into other categories like survival horror,
rape/revenge, Giallo, home invasion, or serial killer films.

For this series I’m trying to select films that fit the
Slasher profile rather tightly, though I’ll admit right now that I’m going to
bend the rules a bit later. The point of this series is to introduce, or
re-introduce, some of the genre’s better and more entertaining offerings to
fans and novices a like. I’m not going to pick anything too obvious, or at
least try (I know I’m not going to offer anything new to the genre’s biggest
fans), and plan of leaving the most successful alone entirely (including the
Friday the 13th, Halloween, and Nightmare on films). I welcome any feedback
or suggestions. 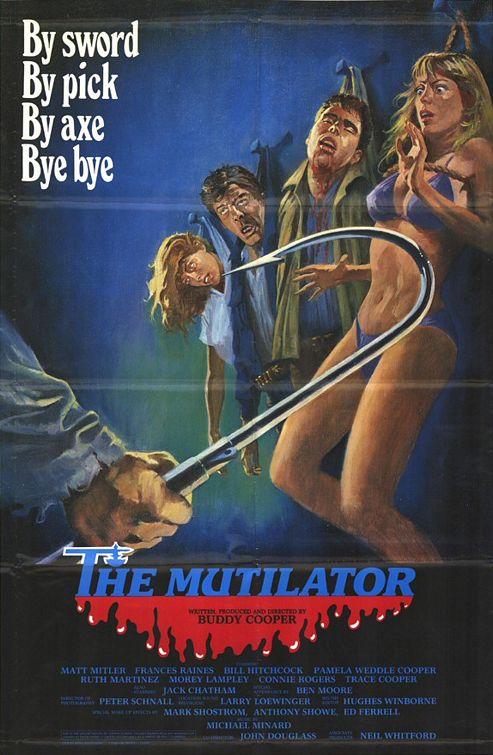 The Gist: The Mutilator is the kind of Slasher teenage boys rent for a
Saturday night sleepover based on the gory cover art. Or at least it was when I
was a teenager. Teenagers these days have their DVDs, Netflix, and torrent
sites. But I’m sure I’m not speaking for myself on this one. Anyway, these hypothetical teenage boys might be expecting a Friday the
13th style romp, but they’d be wrong. The Mutilator is the real,
hardcore stuff. The mere throat slashings and torso stabbings of lesser (and
more popular) films look positively anemic in comparison to the eviscerations,
beheadings and groin hooking found here.

Assuming you’ve found the unrated version. God help the poor
lads that accidentally rented the R-rated version, because besides being one of
the goriest American Slashers ever made, The Mutilator is also one of the
boringest. Between moments of jaw-dropping violence is the story of six twenty
somethings sitting around a beach house. One gets the feeling that there wasn’t
actually a script completed when filming commenced. One also gets the feeling
that the actors were all making up their dialogue as they went along, even
though they aren’t particularly impressive improv players. Director Buddy
Cooper hadn’t written, produced or directed anything before The Mutilator, and
he didn’t write, produce or direct anything after.

The Mutilator scores three Anthropophagus eaten fetuses out
of four. What follows is a break down of Ed Sr.’s killing spree, with screen
caps, so be warned of spoilers. Because this is an especially dull film when
slashing isn’t commencing I’m including rounded off time stamps, though these
stamps refer to the German DVD, which is presented in the slightly sped up PAL
format.

The film opens in the past, with Ed Jr. cleaning his hunting
obsessed father’s rifles. Ed Jr. cocks one of the rifles and fires it for fun.
It is unfortunately loaded, and the bullet goes through the wall, and strikes
Mrs. Ed Sr. in the kitchen. Ed Sr. arrives home just in time to find his wife
dead, and his child responsible. On the gun cabinet is a ‘Happy Birthday’ note,
which Ed. Sr. removes and sticks to his wife’s body.

After 23 minutes of twenty somethings (thirty somethings?)
fiddling about Ed Sr.’s beach house, learning about his various hunting excursions
from a now grown up Ed Jr., Old Ed starts skulking out of site, and has a
fantasy about slowly cutting his son’s (as a child) throat with a giant axe.

During the skinny dipping scene (see Sex and Drug Use),
around 35 minutes, Ed Sr. sneaks up on the naked girl and pulls her under the
water, where she drowns. The scene is very similar to the pool scene in The
Prowler, minus the gore. Then, in a re-run of a scene from the second Friday
the 13th, Big Ed leaves bits of the now dead girl’s clothing around
for her dopey boyfriend to find and follow.

Finally, at 39 minutes dopey boyfriend finds his girl’s
underwear on the door handle of the inner door of the shed Ed the Eldest has
been sleeping in. Expecting to find a naked busty girl he opens the door, and
is greeted by a running boat motor in the gut. The blades tear his torso asunder,
to the point of smoking, he stumbles back to reveal some exposed guts, and
dies.

Wondering where their friends have gone, the other four twenty
somethings (forty somethings?) take a stroll on the beach, where a cop
questions them, then wonders off. At the 45 minute mark the cop wonders too
close to the house, and takes a machete to the face, and after a bit of
screaming is beheaded. Later his head is stuck on a spike in the closet next to
the other bodies.

At 63 minutes the most annoying cast member falls prey to
almost the exact same gag the previous lame and dopey boyfriend did, as he
approaches the same door, with the same underwear. The difference is that this time, instead of an outboard motor, Big Ed has a pitchfork waiting for him, which he rams into the guy’s throat.

Then that guy’s girlfriend comes looking for him, and at the
70 min she’s captured, strangled for a while, then slammed
against the fish gutting table (I guess that’s what it is). Her death is the
film’s one bit of genuinely disturbing death, and the thing missing from most cuts.
Ed Sr. takes an oversized fishhook, sticks the business end into her crotch,
and pushes it out of her lower torso. The girl screams, grabs the hook, and
tries to stop the process, to no avail. She is beheaded off-screen (in all cuts).

Sex and Drug Use:

Ed Sr. was the inspiration behind my scoring system, and
scores four bisected Mutilators out of four. He has no mutant healing factor,
he isn’t a zombie, and he has no supernatural powers, but he really earns his
keep for a regular person. While attacking his own son, Eddy takes a carpentry
spike in the temple, a knife to the center of his chest, a cigarette lighter to
the hand, and is eventually cut in half by his son’s car. But that doesn’t kill
him fully, as he manages to spring back to life and de-leg the cop that arrives
too late to help. After a good laugh the Mutilator is finally dead.

The Mutilator’s nemisister Pam scores three righteous
redneck choking fists out of four. She’s pretty boring for most of the film,
mostly just present to avoid having sex with Ed Jr., but when go time
approaches she saves her sniveling boyfriend from his father’s axe, wrestles
him, stabs him seemingly in the heart, burns his hand with the cigarette
lighter, then backs the car into a wall with Ed Sr. hanging onto the trunk.

Final Thoughts: The Mutilator is available uncut on American
VHS (assuming it’s the unrated tape), and on an OOP Austrian DVD. The UK DVD,
released under the Vipco label, is mostly untarnished, but apparently features
seven seconds of cuts to one scene. DVD company Code Red has the
film on their release list, but don’t have a release date.