The
problem with ‘best of’ lists is that there are so god damn many of
them. For this, my list of favorite movie villains, I’m going to do my
best to avoid the usual choices, like Darth Vader, Hannibal Lector,
Norman Bates or Dracula. I’m aiming for something a little more
original, though I seriously doubt I’ll achieve it.

These are in no particular order, and are steaming with spoilers, by the way.


Nikos Karamanlis (aka: Anthropophagus, The Man Beast, The Grim Reaper, The Man Eater)

As Played By: George Eastman (aka: Luigi Montefiori)

As Seen In:
Anthropophagus (1981) directed by Joe D’Amato (aka: Aristide
Massaccesi). A similar character, also played by Eastman can be seen in
Absurd (1982), also directed by D’Amato.

Back Story:
Nikos was once a family man, but when he and his family shipwrecked on
a semi-deserted island, Nikos was forced to eat his wife and child to
survive. The cannibalistic act snapped something in the back of Nikos’
mind, and he went on a rabid, flesh-eating rampage across the island
(which was apparently not as deserted as he initially assumed).

Most Villainous Acts:
Besides the fact that the island Nikos and his family shipwrecked on
was apparently populated, and likely could’ve helped them (he kind of
jumped the gun on the whole cannibalism to survive thing), Nikos stalks
and eats pretty much the entire cast of the film. In his most shocking
act of savagery, Nikos rips a fetus from a pregnant woman and eats it
right in front of her.

Are Comeuppance Received?: Yes, Nikos takes a pick axe to the gut care of Tisa Farrow, then attempts to devour his own intestines.
Evilness Score (out of 5):

It’s pretty hard to forgive Nikos, but he was always acting out of sun-stroked hunger, so he can’t be all bad.

As Played By: Eihi Shiina

As Seen In: Audition (1999) directed by Takashi Miike.

Back Story:
To call Asami’s past muddled would be a vast understatement. What can
be assumed based on the information supplied in the film is that she
was sexual abused as a child, and has the scars to prove it. Her
demeanor is shy and quiet when she first meets Shigeharu Aoyama at a
fake film audition set up by Aoyama’s friend to help the depressed
widow meet women. Soon after the two start dating and Asami’s ‘issues’
are brought to the forefront, including her abusive past, and some
mutilated guy she keeps in a burlap sack in her living room.

Most Villainous Acts:
There is some confusion as to how much carnage Asami causes, but we can
assume she has killed and dismembered a record producer’s wife, and
kept the mangled producer himself captive in a burlap sack. She also
tortures Aoyama, and threatens to kill his son.

Are Comeuppance Received?:
Though I’m sure some viewers would argue her demise, I think it’s
pretty clear that Asami’s neck is broken when Aoyama’s son kicks her
down the stairs.
Evilness Score (out of 5):

Asami
gets a bit of a pass because of her early psychological damage, and the
fact that picking up girls via a fake movie audition is really slimey
behavior. As Played By: Orson Welles

As Seen In: The Third Man (1949) directed by Carol Reed
Back Story:
The mysterious Harry Lime is a clever criminal with his fingers in many
pies. Post WWII Lime faked his own death as a way of avoiding
punishment for his crimes.

Most Villainous Acts:
Besides murdering a hospital orderly, Harry’s real claim to evil fame
are his post-WWII double dealings, which sees him selling diluted
penicillin to hospitals, causing the deaths of a whole lot of people,
including meningitis plagued children.

Most Villainous Dialogue:
“You know what the fellow said—in Italy, for thirty years under the
Borgias, they had warfare, terror, murder and bloodshed, but they
produced Michelangelo, Leonardo da Vinci and the Renaissance. In
Switzerland, they had brotherly love, they had five hundred years of
democracy and peace—and what did that produce? The cuckoo clock.”

Are Comeuppance Received?: Yep, Harry takes quite a few bullets, the final one courtesy of his former best friend.

There
are few things in this world more vile then profiting off the death and
pain of children. Harry’s a charming guy, but he’s also a huge dick.

As Played By: Joe Pilato

Back Story: Romero never tells us where
came from, or how he ended up in the underground facility, but we do know he
rose to power when his superior was killed by the ‘captive’ living dead. all but refuses to acknowledge the worth of the
bunker’s scientists, and his leadership slowly devolves into bullying tactics,
and eventually violence. Eventually ’
tactics back fire, bringing down the entire operation.

Most Villainous Acts: Things official get ‘bad’ when Rhodes
and good guy scientist Sarah get into a power struggle during what should be a
routine meeting. When his lead is challenged
forces one of his soldiers to pull a gun on her. Later he machine guns Dr. Logan
to death in cold blood, leaves the rest of the good guys in the zombie cage to
die, and ditches his friends when the shit finally hits the fan.

Most Villainous Dialogue: “Choke on ‘em!” (as zombie gorge
themselves on his freshly ripped entrails)

He’s loud, brash, and an old fashion bastard, but ’ action are actually pretty understandable given
the consequences. 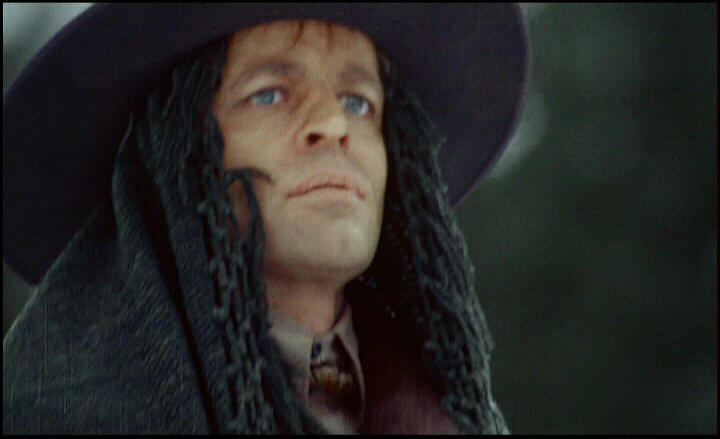 As Played By: Klaus Kinski

As Seen In: The Great Silence (1968) directed by Sergio Corbucci.

Back Story: Klaus Kinski played many memorable villains,
many of them in Spaghetti Western, but none were as evil, calculating or
charming as Loco, the fur coated bounty hunter. Loco’s history isn’t really
important, though he appears as a fully fleshed-out character, his presence in
the film is really just that of opposition to the title hero, Silence.

Most Villainous Acts: Loco’s early murders appear justified,
but his callous treatment of dead bodies rubs Silence and Sheriff Burnett the
wrong way. Later he begins killing more obviously innocent characters,
culminating with the mass murder of basically the entire township. He even
kills the hero.

Most Villainous Dialogue: “Now say good-bye to your husband.
Always respect the dead. Now pack your husband in the snow. That’ll keep him
fresh ‘til I collect his bounty. So don’t you bury him, you hear? What times we
live in. Blacks worth as much as a white man.”

Are Comeuppance Received?: Nope. This is one of the few
cases in Western genre history where the bad guy wins in the end, unless you watch
the alternate cut, but who wants to do that?

Loco kills the hero, then has his cronies open fire on a
couple dozen innocent villagers, then collects a bounty. That’s fucking evil
man.

I’ll be back with more villains next time.