I’m in a sort of obsessive compulsive and nostalgic funk lately, so I think this blog is going to be all about cataloging my perpetual childhood for future reference. I’m starting with a list. Lists are always good.

I think I’ve made it clear in my short blogging tenure that most of my entertainment life revolves mostly around exploitation and horror movies, and cartoons of all shapes and sizes. What follows is a list of my top 15 favorite television based cartoon characters, in no particular order. I’m not counting classic characters like the Looney Tunes or Mickey Mouse and his friends because they started in theatrical shorts originally, and would probably overrun my entire list. I’ve also limited myself to one character per series.

Mr. Burns (The Simpsons, voiced by Harry Shearer)
The general public may have their Homer and Bart, but for me, at this age, Mr. Burns is the one consistent shining light of comedy on even the worst episode of The Simpsons. He works on a cheap gag level (he’s old and weak, ha!), on an old fashion, almost vaudeville level (he’s a greedy rich churl, ha!), and he works especially well as an analogue for other characters (he’s Citizen Kane and Howard Hughes, ha!). Arthur (The Tick, voiced by Rob Paulsen)
I have a particular affinity for the straight man. Without the straight man there is no comedy, just a bunch of noisy and obnoxious people. Arthur is the everyman center of the Tick universe, and his reactions to the insanity of superhero life are some of the funniest bits in the history of children’s entertainment. The episode were he powers a spaceship with his fear is particularly amusing.

Skwisgaar Skwigelf (Metalocalypse, voiced by Brendon Small)
It was hard to pick a favorite member of Deth Klok, because they often act as one idiotic amalgamation, but lead guitarist Skwisgaar ends up with the greatest lines, and has generally the funniest character traits. 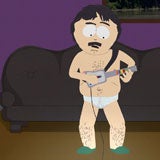 Randy Marsh (South Park, voiced by Trey Parker)
I understand why Eric Cartman gets the most love of the South Park crew, and why he will go down in comedy history, but I always end up laughing the hardest at the shenanigans of Stan’s dad Randy. Randy reminds me not only of my own father, but of just about every father I’ve ever met, and in some strange way I often find myself identifying the most with his charmingly childish worldview.

Gromit (Wallace and Gromit, no voice)
Another straight man. This one’s so straight he can’t even speak. The subtle animation of Gromit the dog’s eye rolls, sighs, shocks, and shrugs have and will always have a special place in my heart.

Jane Lane (Daria, voiced by Wendy Hoopes)
My shared Huey Freeman crush is really a man crush, the kind of crush I have on Steve McQueen, an ‘I want to be just like you’ crush. My crush on Daria Morgendorffer’s best friend Jane goes far deeper. I wanted to marry Jane Lane. She’s that cool. We could paint together, and later I could jam with her brother.

Philip J. Fry (Futurama, voiced by Billy West)
It’s especially hard picking one favorite character from Futurama’s rogues’ gallery, but after strong consideration I settled on Fry, just above Bender and Zoidberg. Fry’s the classic Sci-Fi man out of time. He’s like Buck Rogers, if Buck Rogers was a semi-retarded man-child with a heart of pure gold (and parasites).

Prince/King Zuko (Avatar: The Last Airbender, voiced by Dante Basco)
It took me an entire season of Avatar to realize that Zuko is the anti-Anakin Skywalker (the fact that Luke Skywalker plays Zuko’s father was lost on me for a while too). That’s sadly enough for me to like him right there, but fortunately his character is also developed into three well defined dimensions, more so than any other character in the thoroughly developed series, and one I think time will be very kind to (as long as we can keep M. Night Shyamalan away from him).

The Joker (Batman the Animated Series, Justice League, Batman Beyond, voiced by Mark Hamill)
Even in the wake of an (deservedly) Oscar buzzed performance from Heath Ledger, I still like Mark Hamill’s take on the popular Batman villain the best. It’s difficult for me to pick a favorite from the Timm/Dini DC Animated Universe, but this Joker, especially his final appearances in Justice League and Batman Beyond, is hard to top. One could probably write a pretty interesting essay just about his abusive relationship with Harley Quinn (another Timm/Dini creation) alone.

Yakko Warner (Animaniacs, voiced by Rob Paulsen)
Yakko sits atop the rest of the sprawling cast of the still funny Animaniacs thanks to his Marxian humor (Groucho, not Karl), his hum-dinger singing voice, his penchant for puns, and his taste in giant, bologna filled pants. Yakko’s ‘Nations of the World’ song, which premiered on the very first episode of the series, is quite possibly the best thing ever in human history.

The Monarch (Venture Bros., voiced by Christopher McCulloch, aka Jackson Publick)
In the Venture Bros. universe there is one man that makes everything at least 34% funnier, and that man is the Might Monarch, the arch nemesis nobody asked for, until he was gone. He’s got the best friends (numbers 24 and 21), the hottest wife (Dr. Mrs. The Monarch, formally Dr. Fiancé, formally Dr. Girlfriend), and his neuroses run deeper then any cartoon villain in history, even Skeletor and Cobra Commander combined. John McGuirk (Home Movies, voiced by H. Jon Benjamin)
I said these were in no particular order, but “Coach” McGuirk is my number one. We all know someone like John McGuirk, a rude drunk with Asperger’s Syndrome who doesn’t really understand why everyone avoids him, and we all love them. Our love is usually well hidden, but it’s there. There isn’t anyone else quite like McGuirk anywhere else in animated entertainment or situation comedy, and we should probably keep it that way.

Stewie Griffin (Family Guy voiced by Seth MacFarlane)
I don’t care how much that show deteriorates in quality, and how grating it’s repetitive style can be, Stewie is still a funny character.

Carl Brutananadilewski (Aqua Teen Hunger Force, Voiced by Dave Willis)
Before the show got so Dadaist none but the most stoned could handle it, ATHF succeeded consistently because of the curmudgeon neighbor Carl. Carl’s the straight man of the entire universe, and he knows it. And he hates it.

The Teenage Mutant Ninja Turtles (voiced by Michael Sinterniklaas, Wayne Grayson, Sam Riegel, and Frank Frankson)
The new ones, not the old ones. It’s too hard to separate them.

Killface (Frisky Dingo, voiced by Adam Reed)
I still haven’t had enough time to really appreciate Frisky Dingo. If I remake this list next year, this failed villain might make it.