See What Remains Of Cronenberg’s Vision For TOTAL RECALL One of the side benefits of something like Len Wiseman’s dodgy (if not entirely worthless-looking) Total Recall “reinterpretation” barreling towards us whether we like it or not, is that sometimes something like this will happen! Today we’ve been gifted with the online release of a nice helping of concept art from the original Total Recall film. Of course, I don’t mean Verhoeven’s version, I mean David Cronenberg’s version. You see, The Fly director was working on the film for some time before it shifted hands, and in that time a great deal of concept and design work was done. In this case artist Ron Miller shares work he generated under production designer Pierluigi Basile for the film, and it includes many landscapes, architectural visions, and even some designs for Cronenberg’s vision of Kuato- which was rather different, and perhaps even tamer than Verhoeven’s choice (seen above).

Miller is a science fiction artist and writer responsible for illustrating many classic editions of pantheon scifi books, is considered an expert on several fields within the space exploration field, and has even designed space-related stamps! His work here, with his wife Judith, was shared with io9.com who has the whole batch. I’ve chosen quite a few awesome pieces to peruse here, though you’ll fine some additional model work and and the transformation of Kuato into an odd Sphinx-like statue (apparently on his way to becoming a “kind of phosphorescent vagina”) over there at the link below. And while the art certainly does have a Blade Runner, 2001 feel to it, there certainly would have been some expected Cronenbergian characteristics had the director moved forward with it.

“Cronenberg had some very Cronenberg touches, such as agents with guns hidden within their bodies, but absolutely my favorite idea of all those we came up with was to have camels imported from earth to haul freight across the Martian deserts. This would, of course, have been after significant terraforming had already been done…but not so much that the camels didn’t have to wear respirators!” 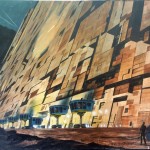 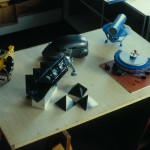 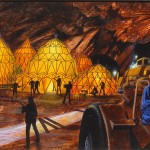 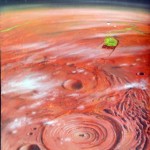 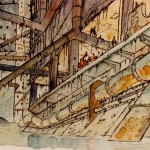 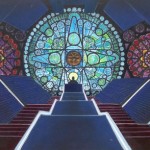 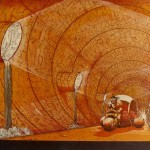 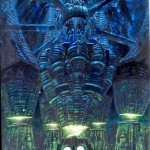 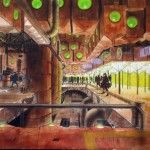 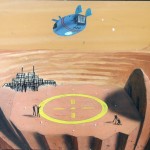 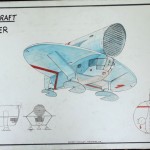