Stallone, Schwarzenegger, And Willis Bring The Action In These New EX2 Stills

Special thanks to B-Action Thread poster, dude hallenbeck for bringing this to my attention.

One of my favorite scenes in the first Expendables* film was the scene in the church that finally had Stallone, Schwarzenegger and Willis together for the first time. It had Bruno being a wiseass and looking more alive in the few minutes he was in there than in most of the films he’d done up to that point. It also had some great banter between Stallone and Schwarzenegger with a line that Stallone tells Willis as Schwarzenegger is leaving that had the theater howling with laughter.

Now we’ve got some stills that show us that the 3 of them are definitely going to be bringing the action in the sequel. 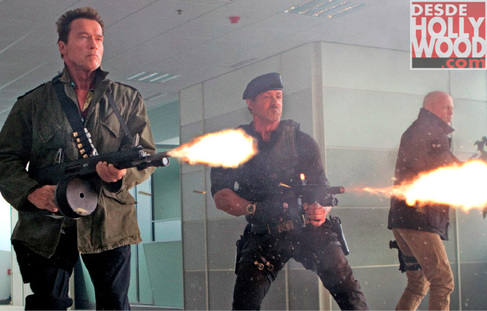 *This past Sunday I saw The Expendables with my Dad and it was his first time seeing it, and he loved it. One of the best things to come out of it was during the scenes where Gary Daniels tortures Stallone with kicks, and has a fight with Jet Li and Statham. My Dad referred to him as “Little Bennett” and “Bennett Jr.” That had me smiling.