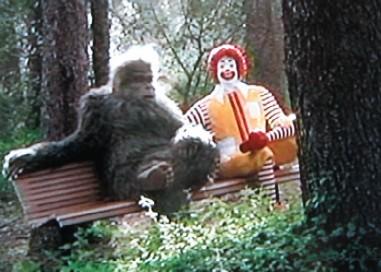 Eduardo Sanchez (not the one that sired Kenny Powers) is gearing up for a found footage style Bigfoot film called Exists. Here’s the details on it.

” ‘Exists’ is a horror-thriller that chronicles a group of friends who set out into a remote Texas woods for a weekend of fun and are stalked and hunted by Bigfoot.”

I’m still on board with found footage films as long as they get it right (Apollo 18, and the last 2 Paranormal Activity films haven’t.), and I became a life long fan of Eduardo Sanchez after seeing Altered. (If you haven’t seen this criminally underseen masterpiece, then you should.) I will see any of his films just based on that film. I have faith that he will do good things with Bigfoot and Found Footage*. I mean it’s Bigfoot. How can you not want to see a movie with Bigfoot in it? A killer Bigfoot as well.

I mean maybe we’ll see something close to this.

*He is one half of the team that spurred the re-interest in Found Footage films with The Blair Witch Project, which I remember not liking when I saw it in the theater with my Uncle back in 1999, but upon revisiting it many years later, I found it to be damn effective and scary. So at least we know he knows how to do Found Footage well.