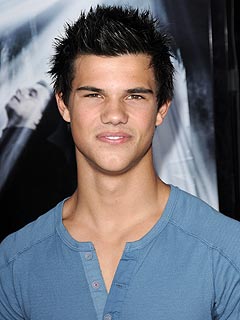 Fuck this douchebag in the ear with a pencil.

Admittedly I enjoyed Grown Ups. It was a stupid comedy that piled together some comedians that haven’t been raking in the dough in solo acts (save for Sandler), and combined they were funny*. At least to me (a fan of cinema) and a shitload of other people who are just casual filmgoers.


Well now Sandler is pissing off those who hated the first film (and me now) by casting that block of wood named Taylor Lautner. Apparently Lautner is going to go up against Sandler and here’s hoping Sandler embarrasses him in the film, or it’s just a cameo appearance, because I just can’t stand this guy. He will draw in lots of teenage girls, and that’s the main reason that Sandler is putting him in it. He wants to broaden his audience. Don’t think a lot of teenage girls want to see a bunch of 40 year old guys doing silly things. Well, maybe they do. I don’t know.

Anyway, fuck this guy and his whiny bullshit.

*I’ve never really been a fan of Kevin James. He’s obviously the surrogate for Chris Farley, but I never got into The King Of Queens, and Paul Blart: Mall Cop was a plague on film. So boring and unfunny.