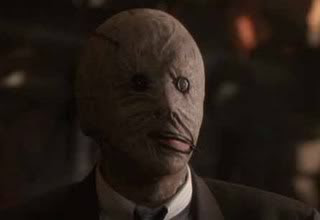 Think I'll make a trip down to Miami and visit this "Dexter" character....

I’ve been a huge Clive Barker fan ever since I saw Hellraiser on USA when I was about 12. I discovered Nightbreed* one saturday night on TNT when I was 15, and loved it. Even in it’s edited for tv form. Didn’t see the full version until it hit dvd several years later. Nightbreed is really an underrated film and not only does it feature amazing fx work, it showcases that David Cronenberg is as great an actor as he is a director.

Now there’s word from Clive Barker that the movie is being worked on to be a tv series.

Here are the words straight from the man himself.

“We are also actively in conversation about doing a ‘Nightbreed’ television series which will be for cable, so it will have a chance to be as sexy or as graphic in terms of the violence as we need it to be,” says Barker. “For example, do you have Spartacus over there? Oh my God, it redefines gruesome… I also applaud them for finally realising it’s not a bad thing to see a manhood once in a while – it’s not as if half the world doesn’t see it daily…”

I love how he uses the Spartacus tv series as an example, as I’m a fan of that show, and it does get pretty over the top in it’s gruesome violence and sleaze. Perhaps he’s hinting that he’d like it to be on the Starz channel like Spartacus? Well, at least we already know it’s not going to be sanitized. Frankly, I’d have a hard time believing it if Barker said that he was trying to shop it to regular tv networks. There’s no way something by him would be able to work within the limitations of network tv. Not even a Harry D’Amour series.

This tv series will also hopefully help to get out the “Director’s Cut” of the film that’s been slapped together and has been making the rounds in the convention circuit. I’d love to see that.

*I’ve never read Cabal the source novel for Nightbreed, but that’s one book I know I need to get to. Just last night I finished reading The Hellbound Heart, the progenitor of the Hellraiser series, and it was quite the interesting read.