After last night’s finale which broke it’s own ratings record (9 Million viewers), a slew of information has emerged. If you’re a fan*, or someone who doesn’t like spoilers, avoid reading the rest of this. If not, and you’re like me who likes to know as much as possible, then read on!

The tail end of the finale featured a woman in a poncho with 2 chained zombies. That would be Michonne. She was basically introduced the same way she was from the comics. Wielding a Samurai sword. We didn’t see her face, most likely because she hadn’t been cast yet. Well, now she’s been cast. A lady named Danai Guria will be picking up the Katana and do some zombie slaying for the next season, and hopefully longer. 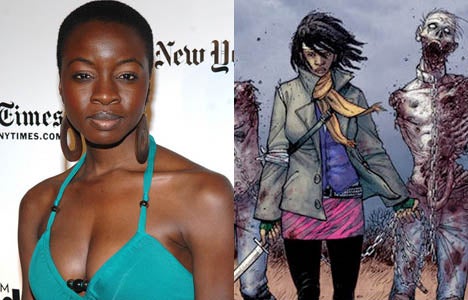 As a big fan of the comic* It was cool that the final shot was of the prison, as thats the point where things get really crazy, and some truly shocking things happen.

What is also confirmed (and something we all have hoped for) is that Michael Rooker will be returning as Merle, and he was quoted recently as saying that he’d “Lost 20 pounds for the role.” so this means that we will be seeing Merle post-hacksaw, and probably not eating well, thus the losing of weight. Wouldn’t doubt he runs into The Governor’s crew and becomes a part of it. Let’s hope its more than just one episode. Is it too much to hope for him to be a regular for the season? Either way I’m really looking forward to this next season and what horrific treasures it bestows on us.

*I, like others was put off by how slow the first half was, but man did these last 6 episodes really pick up the pace. The finale may very well be the best episode of the season, with the “Rick and Shane throw down over killing the kid” episode. Both of which were coincidentally directed by Ernest Dickerson. For the record, I loved all 6 episodes of the short first season. I’ll be with this show until the end.

*I’ve known about the comic for years, but it wasn’t until just before the show premiered that I picked up the first volume, and then got hooked and ordered the rest of the volumes that were available on Amazon. Makes for compelling reading.