The Premise: Shepard is tasked by Admiral Hackett to help an old friend of his, a scientist named Amanda Kenson, who has been kidnapped by batarians, and may have also discovered a vital secret about the oncoming Reaper invasion.

Is It Good?: Maybe? As excited as I was to tackle this one, as much as it was hyped as the bridge to Mass Effect 3 and whatnot, there’s really not a whole lot to write home about here.

That’s not to say the mission is bad. By the standards of most of the game’s sidequests, it’s actually entertaining, with two huge gameplay setpieces unlike anything else in the game. The first section has Shepard stealthing her way to the good doctor’s chamber. It’s not Metal Gear Solid, but not going in guns blazing does have an achievement/trophy attached, so there’s at least incentive to go the subtle route. At least for the first half, Dr. Kenson herself is like a hard-edged, curb-stoping Helen Mirren. There’s also a hectic, amazing shootout while waiting for a Reaper artifact to power up that gets the juices flowing as well. 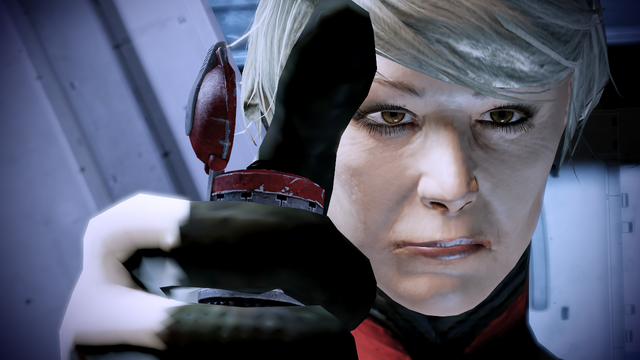 My main gripe takes us directly into SPOILERTOWN, so, feel free to skip down till you see the exit.

The issue is that the twist involving Dr. Kenson’s indoctrination, you can see from zip codes away the second she mentions having a Reaper artifact unguarded, and the story doesn’t do anything with it. On top of that, the mission brings Shepard to one of the biggest decisions in her military life: genocide in the name of galactic survival. It’s a real “needs of the many” moment that comes and goes before the game decides to load any sort of gravitas upon it. We discuss the price paid with Hackett afterward, and judging from the ME3 demo, we get to deal with the consequences in the next game, but the mission itself doesn’t do that heavy prospect justice. It just becomes another shootout. A good shootout, but an threadbare one, that could and should be much more. It’s telling that the mission’s best dramatic moment is a foreboding conversation with Harbinger at the end, telling us, ultimately, what we already know.

The bottom line is that Arrival is another decent hour of gameplay. But an hour that wants to be so much more, but just isn’t ambitious enough to go for it. For our last dance with Mass Effect 2, that’s just disappointing. Length: About an hour.

Moment To Savor: Well, the Renegade Interrupt where you ultimately pop a cap in Kenson is pretty damn satisfying. But I’ll go with the destruction of the mass relay, which reminds me of the spectacular ending of Halo 1, in the best way.

Worth it?: As of this writing, it’s not clear exactly how much the events of Arrival impact ME3, aside from the fact that Shepard is most definitely out of favor with the higher ups of Earth. But getting to play through that event is a pretty big milestone in Shepard’s career. So, I’m gonna tentatively, furtively, say yes.