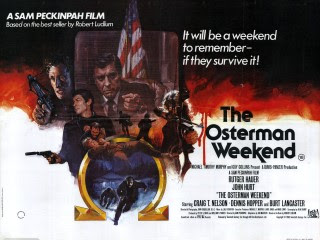 The Osterman Weekend is quite the strange little movie. It’s adapted from a Robert Ludlum novel, it was Peckinpah’s final film, and it’s entire plot plays out even stranger. It’s about a tv news anchor who’s told that his friends are in fact Communists and that his house needs to be wired in order to sweat it out of them. Needless to say this is all a ruse, and it turns into a good old fashioned home invasion film, as only Peckinpah can make, with tons of slow motion, Rutger Hauer, the lovely Meg Foster, and Craig T. Nelson sporting a hilariously fake mustache. Suffice to say, I love the movie.

It’s now being remade by a fellow named Brian Kirk. I’m vaguely familiar with Game of Thrones (still weighing on whether I should blind buy the Blu-ray set, leaning towards picking it up.) but from what I’ve heard it’s got a lot of action, and he sounds like the best choice to remake the movie. It will probably be also closer to the original Ludlum novel, which I’ve heard isn’t the most coherent thing either. Either way the original movie isn’t some highly touted classic, so this remake shouldn’t get a lot of people up in arms over it.

The source article mentions that this film is a ways off, but it may be fast tracked if The Bourne Legacy is a hit, and judging from that amazing trailer featuring the amazing Renner, it should be a hit.

Here’s the trailer for the original film in case you’re curious about it.