Catching Up with Sherlock #17

The Adventure of the Abbey Grange

Found in: “The Return of Sherlock Holmes” 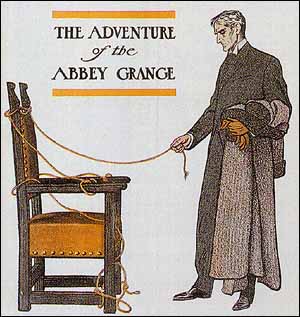 The Case: A particularly nasty drunkard named Sir Eustace Brackenstall has been murdered at his house in Abbey Grange. The only witnesses were the Lady Mary Brackenstall and her maid, both of whom provide solid testimony against a local band of thieves. The case seems airtight, yet Sherlock senses that something’s amiss.

The Solution: *An old lover of Mary’s had heard of her mistreatment at the hands of Eustace. He went to confront Eustace and ended up committing murder out of self-defense. Mary, the killer, and the maid later conspired to shift the blame onto some robbers.*

Impressions and Fingerprints: Contrary to popular belief, it was actually Shakespeare who first wrote “The game’s afoot!” (Henry V, act 3, scene 1). The line has since become Sherlock Holmes’ most famous catchphrase, and it all started with a quotation at the start of this story.

The case itself is most interesting because of how conclusive it seems to be at first. Sherlock has an unusually difficult time finding anything out of the ordinary, even after he personally inspects the crime scene and talks with the witnesses. As such, this story marks one of the precious few moments in which the proud and self-composed Sherlock Holmes seriously starts to doubt his own senses.

Is it still worth it? This case is very clever in how the clues are hidden and revealed. Additionally, the solution puts Sherlock in yet another moral dilemma that’s interesting to read, though it strains plausibility greatly.