Catching Up with Sherlock #11 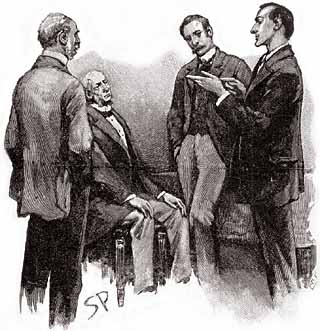 The Case: Sherlock Holmes has fallen ill after running himself ragged for a previous case, and Dr. Watson prescribes some R&R at the country home of an old friend in Reigate. Their timing is impeccable, as the neighborhood has recently seen a burglary and a murder.

The Solution: *Some of the neighbors were locked in a dispute over real estate. The burglary was a cover-up for a failed attempt at stealing some legal documents for the case. When the thieves’ coachman found out about it and tried to blackmail them, he was murdered instead.*

Impressions and Fingerprints: This is a mystery with precious little in the way of visible clues. This means that Sherlock must resort to some methods that are even more unorthodox and opaque than usual.

More importantly, this story has a unique recurring thread: Sherlock’s infirmity. Because his nerves were so completely shot at the outset, and because his activities are strange even by his normal standards, this story constantly raises the implicit question of whether Sherlock has finally gone mad.

Is it worth it? The only reason why these crimes are a mystery is because the culprits and the local authorities are idiots. Still, this story provides a very fresh and interesting perspective on Holmes’ methods.