Catching Up with Sherlock #10 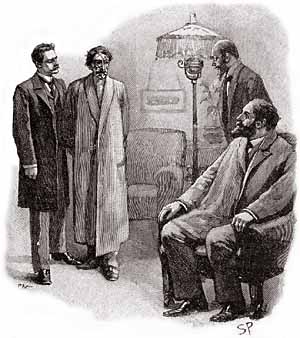 The Case: Mr. Melas is a Greek interpreter who was kidnapped and taken to an undisclosed location. There, he mediates a conversation between a sinister individual and a badly wounded man named Paul Kratides. After repeated threats and demands to sign documents of some kind or other – all of them refused by Kratides – the discussion is interrupted by a woman named Sophy. Mr. Melas is given some money and sent on his way.

The Solution: *Kratides and Sophy are siblings, and the kidnappers are trying to get their property.*

Impressions and Fingerprints: Introducing Mycroft Holmes. Though he isn’t nearly as well-known or beloved as his younger brother, the first thing we learn about Mycroft is that he’s even better at observation and deduction than Sherlock. The difference is that Sherlock sees his talent as a higher calling that comes with a responsibility to solve crimes, while Mycroft thinks of deduction as nothing more than a parlor trick. Thus, the two brothers are often seen at loggerheads, both in and out of canon.

Generally, Mycroft is seen to be rather fat and lazy. To wit, he’s the co-founder of the Diogenes Club, in which the wealthy, powerful, and anti-social can gather in complete silence. Seriously, the whole point of this club is that talking isn’t allowed. Last but not least, though this isn’t mentioned until a later story called “The Bruce-Partington Plans,” Mycroft is said to be in a position of government. In fact, according to Sherlock, “occasionally he is the British government.” To sum up, Mycroft is basically a parody of the rich and powerful.

Is it worth it? The case is surprisingly dull, and solved with very little effort. Still, Mycroft makes this worth a read. The exchanges between the Holmes brothers are simply priceless.