Catching Up with Sherlock #8

The Adventure of the Speckled Band 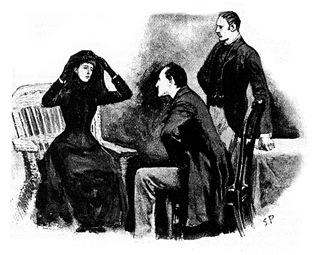 The Case: This mystery begins with Julia Stoner, who was killed under very peculiar circumstances. First there were some unusual noises in the night-time, and then Julia talks of “the speckled band” with her dying breath. The coroner was completely unable to determine her cause of death.

Two years later, Julia’s twin sister, Helen Stoner, is awakened by the same noises. Frightened to the point of hysterics, she consults Holmes and Watson.

The Solution: *The “speckled band” is a venomous snake that the Stoners’ stepfather had trained to kill them so he might keep their inheritance.*

Impressions and Fingerprints: Yes, this case is extremely far-fetched, even by this series’ low standards. Still, it’s the characters that really make this story worth reading. This story is quite notable in that Holmes and Watson both go into mortal danger in place of their client, with little idea – if any – of what danger is coming.

Even so, the highlight of this story is definitely its villain. Not only is this character strong enough and psychotic enough to pose a genuine threat to our heroes, but he’s also smart enough to throw Sherlock Holmes onto a wrong scent (however temporarily) at a critical moment. Plus, he has a whole menagerie of dangerous and exotic animals, which is pretty cool in itself.

Is it worth it? It’s an enjoyable read, though not one of the better ones in the series.