Catching Up with Sherlock #5

The Adventure of the Copper Beeches 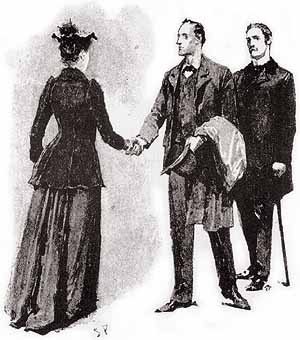 The Case: Miss Violet Hunter is offered a job as governess for £100 a year, but the job comes with several unusual demands. She has to cut her hair, she has to wear a certain dress, and she has to sit at a particular spot while her boss tells all manner of amusing stories. Also, she can’t go into a locked wing or she’ll be fed to a giant mastiff. Scared and confused, she goes to Baker Street.

The Solution: *Hunter has been unknowingly hired to impersonate a different young woman, to prevent a wedding and cover up a kidnapping.*

Impressions and Fingerprints: Sir Conan Doyle read hundreds of books to prepare for his medical and historical texts, but he did absolutely zero research for Sherlock Holmes. His mystery stories were written entirely for the money, and Doyle always resented them as distractions from what he considered more educational and important works. So, when Holmes opens this story by accusing Watson of sensationalizing their adventures together while glossing over the methods and logic used to solve the cases, it’s hard not to see that Doyle is using Sherlock as a proxy to ridicule his own work and those who read it. In fact, Holmes gets a lot of great dialogue here. This story contains such quotable lines as “Crime is common. Logic is rare.” and “Data! data! data! I can’t make bricks without clay.”

As for the actual mystery, it’s far better than it might appear at first blush. The solution turns out to be very complex, with some great challenges for Holmes and Watson both. Best of all, it’s topped with a bit of violence and some rather terrifying images.

Is it still worth it? It’s got an unusually well-developed client, a deceptively villainous culprit, and a very strange mystery, with some great moments from Sherlock to boot. Certainly worth a look.