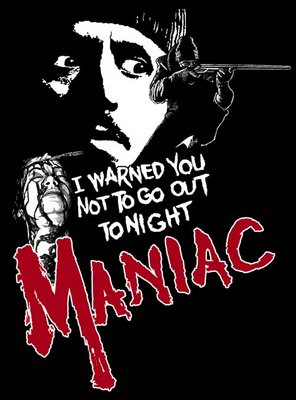 Leave it to Alexander Aja to put his power behind a remake of a movie as screwed up as Maniac.

News has broken that Elijah Wood has been cast as “Frank” and an actress named Nora Arnezeder has been cast as “Anna” in a remake of Maniac, the 1980 William Lustig… classic?  These are of course the 2 central roles from the original film.

It’s no secret on the CHUD message board that I’m a big fan of Lustig’s Maniac. It’s a movie that repulsed me when I first viewed the widescreen VHS in 2002 then, upon revisiting it several years later, it became one of my favorite horror films.

A large part of what made the movie work was character actor Joe Spinell’s central performance as Frank Zito. Joe Spinell was not “good looking” in even the most remote sense of the term. He had stringy/greasy hair, a face full of pock marks, and years of drinking had given him quite the gut. Still, he brought out a (dare I say it?) award-worthy performance of a man whose mother warped his mind and made him want to kill beautiful women and scalp them. It’s still got some of the most gruesome and realistic effects ever put to film, and a stalking sequence that gives new meaning to the word TENSE.

I was at first puzzled by Elijah Wood’s casting. He isn’t who I’d imagine being cast as Frank. In fact, I’d expect someone like Richard Brake (Joe Chill from Batman Begins, and one of my favorite working character actors today) to be cast. Wood is still relatively young, but he did bring a pretty creepy performance as Kevin in Sin City, without speaking a word at all. I’ll give him the benefit of the doubt mostly for the fact that Alexandre Aja is behind the film. He’s not directing mind you, but he and Gregory Levasseur are writing it, and Franck Kalfoun (Director of P2 and the clerk who gets an axe to the chest in Haute Tension) will direct.

Either way, this movie better have THE ULTIMATE in it, or I’m going to be pissed off.