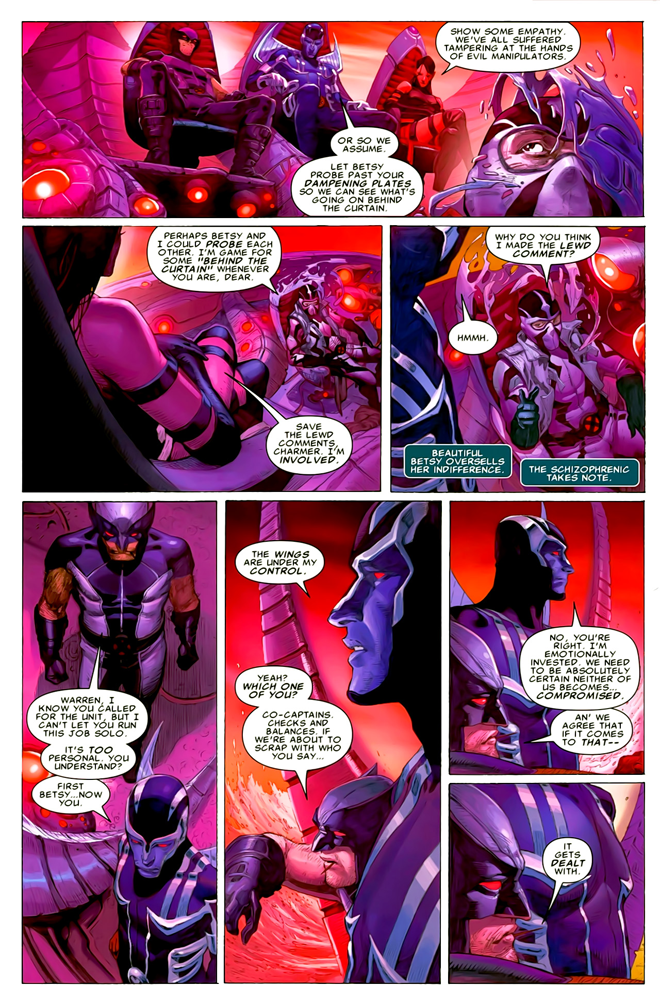 Is it a revolution? Maybe that’s a bit over zealous, but then again, maybe not. I’ve never made a secret about my epic disappoint in Marvel comics* or my break-up with the x-men years after Chris Claremont left when I realized, despite some occasionally good concepts, that I hated them and had continued reading them out of pure inertia. But now I’m cracking off a little piece of my words, smothering them with Sierra Nevada Pale Ale Mustard, and wolfing them down because folks, I am freakin’ LOVING the Uncanny X-Force title, and it’s very much due to one Mr. Rick Remender.

I have a small cabal of comic writers that I follow and that’s pretty much all I read, and I am perfectly aware how much that limits me from finding new things. However, I love to talk comics (can ya tell?) and when I find like-minded folks I listen to what they recommend. Recently my friend Greg told me to check the X-Force book out, and although I initially thought I would not like it, I did and immediately fell in love.

First – this book is not BOGGED DOWN BY CONTINUITY. Yes! I have not read the x-books in years and do not know anything about what has happened in them since shortly after the Age of Apocalypse storyline, other than what I gleam from previews and various wikipedia articles. With Uncanny X-Force, that doesn’t matter. The book is very deft at plucking arguably the most popular characters from the regular X-continuity and having them do their own thing within the confines of the title. And not in one-shots either. The book uses a team that feels fiercly independent, and very similar to the team of X-Men from my perceived glory days of the title, back circa #227, where there was more of a clandestine, underground feel, not the high-visibility hero tone that has permeated Marvel – for good or bad – for some time now. The idea is a kind of wetworks team, but none of this, thus far in what I’ve read, which is issues 10- the current 16, feels smaller in scope because of that. To use a very dated example, a book like this could feel a lot like GIJOE Special Missions felt compared to the constantly evolving narrative and broad scope of the core title.

In fact, right now the book is in the middle of The Dark Angel Saga – an epic that feels HUGE in scope, but doesn’t become mired while permeating into other titles’ continuity or pilfering in too many extraneous characters. The team even ends up in the parallel dimension from the Age of Apocalypse and it really, really works. It’s been nice too, because  this has served to pick up a lot of the dangling plot threads I remember never having been (in my opinion) properly acknowledged or flushed out after the original AOA storyline, i.e. what is Dark Beast** really up to or the eventual origin of some of the original characters from the AOA in the regular, Earth 616 dimension, most notably the introduction of 616’s Holocaust, or Genocide as he is named here upon his wickedly written introduction into that regular Marvel Universe.

Now, as I’ve been rather busy fawning over Remender’s X-Force title another book I tentatively began reading recently and am having a lot of fun with is Venom, which is also written by Mr. Remender. I’ve never been a Spiderman reader for more than a couple issues here, a couple there – and even that not since the late 80’s – but I’ve always LOVED Venom as a character. However, as I’ve stated here previously, other than his first few appearances*** I’ve never seen that anyone has put this character to good use. Which has always doubly troubled me because visually Venom has just gotten better and better – cooler, darker, more horrific, but story-wise he’s always suffered from the conundrum of the popular evil character who the company feels they need to restrain and make a good guy. And that restraint always feels forced and ridiculous. In Remender’s Venom however, the entire story is about not just restraint, but maintaining that restraint. Flash Thompson lost his legs in the service of his country, ends up being approached by the military to be a go-to guy for the now captive symbiote that is Venom. Something troubling comes up, a mission is put together and Flash gets the call to come in and be temporarily bonded to the alien. He has a limited amount of time to utilize the power that comes with it, control it with his military expertise and tie up the case, then return and have the suit removed before it permanently affixes itself to him. Amidst all of this there’s Thompson’s own internal struggles (great ish recently that dealt with his drunkard father, the root of why Flash is who he is), his fight to keep his operations a secret from his girlfriend Betty and his good friend Peter, and some B-level bad guys re-imagined and re-worked  (the new Jack O’ Lantern – AWESOME).

So now I’ve got Mr. Remender on my list of authors to follow and I went looking for more. Thanks to one of the guys at Manhattan Beach’s The Comic Bug I acquired the first issue and need to go back for more. I’m super psyched because I haven’t glommed onto a new comic author with this ferocity in a while, and what’s more, he’s infiltrating the big leagues and utilizing characters I was either sick of or never happy with and making them great.

And for that, I’m a Rick Remender fan for the foreseeable future.

*Not saying anything about DC, because I have no attachment to any of their characters (well, except for Garth Ennis’ Hitman) and don’t read anything from them unless a writer I like is writing it.

** Such an awesome character!!!

*** Talking ’bout Amazing Spiderman numbers 298-300 – dark, dark stuff when you find out what Venom/Eddie Brock did to make Mary Jane so afraid of the black spider suit that Peter hung it up for good