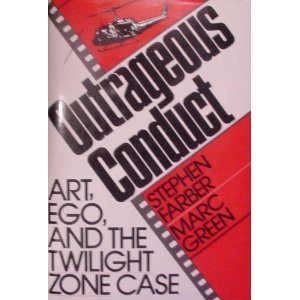 About a year ago when I was home visiting Chicago Mr. Brown bestowed upon me a copy of Stephen Farber and Marc Green’s 1989 book Outrageous Conduct. The book is an accounting of/reaction to the infamous Twilight Zone Movie accident in 1982 that killed actor Vic Morrow and two very young Filipino children (6 and 8 years of age). The authors (or at least one of them – the book has a tone that suggests Farber may be the ‘author’ and Green the researcher/fact checker) comes off as overly biased – of course how couldn’t you be, it’s not as though Director John Landis, under whose healm the disaster took place, isn’t guilty of the (at least near-)criminal neglience that lead to the loss of three lives. However, even in the face of irrefutable facts there is a certain tone that is expected in a project like this, and Farber and Green come off so strong that one wonders if it was all outrage or perhaps something personal snuck in there too…

Anyway, we’ll stick to the outrage, because it’s pretty dire. The book chronicles the events leading up to the disaster, including the climate of Hollywood at the time in regards to stunts, stunt persons, stunt protocol and, of course, the legal guidelines of having children involved in a shoot. As it pertains to our situation here in 1982, children quite simply were not allowed to work on set after 8 PM and Landis and/or his people purposely ignored that fact. They also  apparently purposely ignored standard (and seemingly common sense) stunt guidelines, hence a helicopter flying too close to a set populated with actors surrounded by explosions.

It’s pretty clear that the outrage that Farber and Green feel about this tragedy had not alleviated one iota by the time of the book’s publishing some seven years later, and maybe that’s good. Although, it must be said, when people argue in such a way as to very clearly have cross hairs on their query’s forehead parts of their argument may become suspect (I’m looking at you, Michael ‘I-used-to-be-relevant’ Moore) and despite my own much quieter outrage some thirty-odd years later I must say that the authors here do indeed come off a bit biased – although I don’t know what could change perhaps other than a more even-keel in the presentation of the facts, instead of the sensationalism I feel sneaks around most of the books pages.

That being said, so far great read, it just has a little bit of the Hard Copy element, and that’s scary.