Funny. Just when I thought I’d hit the end of my local resources for trying new beer a brand new store, Total Wine, appeared in the Southbay and Ta-freakin’-Da I suddenly found myself with isles and isles of new stuff. Well, I’ve tried a lot of the stuff in those isles, but there is also, refreshingly, much that I have not tried. Our other local Toys R’ Us for alcoholics is Bevmo but honestly, over the last two years it has just felt like Bevmo has given up. It’s the same thing there week after week, month after month, with only a very small influx of new items, usually around the holidays. This makes the place boring, most especially since Total Wine opened* and I saw a new level in status quo (which hopefully will not become stagnant).

First up on the list of things I acquired was a six-pack of Big Sky’s wonderfully mild Scapegoat Pale Ale. This is something we’re seeing more and more of, the good beer in cans, which at first appears to be gimmicky until you realize that cans are a pretty great packaging system for beer – ales of color, like Pales, IPAs and Browns need to be stored in something that doesn’t let light in, otherwise you get some skunky brew (Newcastle in a bottle seems to so rarely taste like Newcastle, hence why over the last five years or so the market penetration of Newcastle in cans has become more popular). I don’t know about you, but if I’m in the mood for a skunky beer I’ll order a Heineken thankyouverymuch. When I drink a Pale, I want it to taste like a Pale.

Next was something I’d been looking for for quite some time: almost two years ago the wife and I stopped at a Rock Bottom Brewery to eat some late-night grub after a movie and it was there that I tried my first Black IPA. When the server first mentioned this as their current seasonal brew I stopped him – at the time I’d never heard of** a Black IPA, so I asked to have a sample. Let me tell you, they are grand! That night I think I drank about three pints of Rock Bottom’s and took a growler home to savor over the next day or two, and since I’ve tried to keep track of the restaurant’s schedule for seasonals. This has been disappointing at best. About five time since either my wife or I have called to enquire about the possible scheduled return of the Black IPA and at least half of those times restaurant employees have given us dates that then never pan out. I understand with small batch seasonals things can go wrong or not gel in ways that postpone or downright inhibit a particular brew, but it seems to me there should have at least been one return.

So anyway, in Total Wine’s massive build your own 6 pack isle my wife found a nice big bottle of Laughing Dog Brewery’s Dogzilla Black IPA. It was with much anticipation that I added the bottle to our ever-expanding cart and it was the first bottle I cracked open once we arrived home. Verdict: FANTASTIC!!! A definite run for the money with the Rock Bottom recipe, and Laughing Dog’s has the added bonus of being readily available, as it went from being a seasonal to a year-round back in (I think) 2008. The interesting thing about the Black IPA recipe is (apparently, and if anyone can add to this please do, I’m more of a taster than an out-and-out beer structuralist) the malt used is black malt, which not only provides the rich color but also a bit of a creamy, roasted sweetness on the back end (but not too sweet mind you) of the flavor. 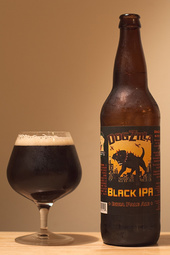 Last item I’ll mention here is my favorite of my acquisitions and now something I absolutely MUST have in the house at all times. It is:

Sierra Nevada Pale Ale has long been one of my favorite beers and a staple of my diet, ever since moving out to LALA land and losing Goose Island’s Honker’s Ale (which I’m still waiting to see open up in distribution since that wonderful brewery’s sale several months ago to, ahem, A. Busch – let’s go guys) but I had absolutely no idea the company made mustard. And what mustard it is. I’m not a total mustard aficiando like some people I know (Marc, I’m looking at you sir) but I dabble a bit, and brother, this is just about the best damn mustard I’ve ever tasted. You know how some people eat peanut butter toast in the AM? Well, I’ve actually now made Sierra Nevada Pale Ale Mustard toast as a late night snack a few times since finding this.

Okay, well, there will no doubt be more to report soon, as I haven’t even begun to tap into the riches of beer in this new store, so I’ll report back when I’ve find some more keepers (and am sober enough to do so).

Until next time, drink up!!!

* Both are chains. Oh how I long for an independently owned bastion of unique intoxication, much like my beloved Belmont Party Supply in Dayton, Ohio suburb Kettering, or the late great Twisted Vine in Orland Park.

** Or possibly had heard of, and had even tried, and then not remembered, one of the drawbacks to sampling new beers en masse is you can, ah, forget a lot of what you learn.