What is there to say about Duke Nukem Forever that hasn’t been said before? The game has been a butt of countless jokes, the story a scary cautionary tale of what happens when you don’t know when to stop working or stick to a schedule. 15 years later the sequel to one of the most acclaimed first person shooters of all time is finally out, but the years have not been kind. They’ve been downright cruel.

Duke Nukem Forever is the worst kind of disaster- the one you saw coming. We all knew the implications of all these delays but a lot of you will buy the game hoping against hope that Gearbox somehow managed to salvage it, even if you know in your hearts that they didn’t. But it would be wrong to blame them- they knew people would buy this one no matter what. It just doesn’t change the fact that this is a game that should never have been released. If it were simply more of the same from Duke Nukem 3D, it would still be a great game. Antiquated, sure, but you can still pick up Duke Nukem 3D today and have a blast with its clever level design, fun combat and humor. But with Forever we’ve got a game that’s riddled with graphical bugs, full of horrific loading screens, crammed with boring enemies and weapons and bosses… and it’s not even funny. This is the funniest moment.

Duke Nukem is a world-renowned hero for saving the Earth from the alien menace 15 years ago. Since then he’s basically become the emperor of Vegas, opening hotels, strip clubs and even burger joints, all bearing his name and likeness. When aliens land in Vegas and invade his suite on the 69th floor of his hotel and steal his lesbian schoolgirl babes the Holsum Twins, he’s pissed and ready to kick alien ass.

That last sentence should give you an idea of the timely humor you’re going to find here.

The very first level is a remake of the last football stadium level from Duke Nukem 3D, and it’s telling that the original was much more exciting. You’ll know things are bad when you first get your hands on it and see how it controls, and that’s likely why they haven’t released the demo to the general public yet. You’ve got the usual array of modern first person shooter controls- click the left stick to run, shoot with the right trigger, aim with the left, but there’s no iron sights for aiming- the screen simply zooms in. It’s the first indication that you’ll get that this game hasn’t been updated to the extent it should have been.

The same aliens Duke has always fought show up again to get blasted away one by one, pig cops and psychic octopi and whatever those guys with jet packs are. There’s no real variety here- you’ve seen them all before and you’ll see them all quite early in this game and see no further variety. The only new foes are some of the giant bosses, massive creatures with health bars that need to be whittled down before they’re susceptible to a QTE that will kill them for good- one of the many new additions that would have been smarter to leave out of the game.

Duke’s weapons are all the same as well, shrink rays and the three-barreled machinegun and the like, but they have been gimped considerably. Thanks to Halo’s influence Duke can only carry two weapons at a time instead of an entire arsenal of weaponry. The tiny maximum ammo counts for the weapons force you to hunt for ammo or new weapons every two to three clips as well, the RPG holding a mere five rockets rather than the 50 you could load into that monster in Duke Nukem 3D. It’s emblematic of the problem with this game- it’s supposed to be over the top but they don’t really let you play like you’d want to. Sure, you’ll only face a few enemies at a time here (engine not up to snuff?) but why should Duke have to conserve ammo? Another gripe are the trip-wires. In the last game you could place them on any surface you wanted and set traps- this time they’re thrown like a grenade and can end up anywhere, pointing in any direction. “Lack of direction” is a phrase that  that will frequently come to mind while playing this game.

The interaction with the world has been mostly kept the same, but of course it’s not as special now. You can pee in toilets, shoot pool, play pinball, throw a paper airplane and play with all kinds of little objects on the way, and the game actually encourages it with the Ego meter. Interacting with stuff (like looking in a mirror) will increase your Ego meter, which works as a rechargeable shield for Duke. Get shot enough to deplete it and your screen will turn the usual bloody red and you’ll have to find cover somewhere so it recharges. Perhaps sticking with health packs would have been preferable, because enemies can (and do) kill you without warning- it seems that just a few explosives will kill you and send you into one of those interminable loading screens. The bosses are even more cheap.

But while the majority of the game sees you going down repetitive environments killing enemies, once in a long while though you come across a level that contains a clever puzzle or two of the sort that you simply never see these days and wish that they could have kept this up for the entire game. For instance, there’s a great sequence where miniaturized Duke has to navigate his way through a kitchen, fighting off Duke-sized rats, hiding from giant enemies behind cans of soup and using spatulas for trampolines. The platforming sequences are actually implemented quite well- a rarity for a first person shooter. But you’ve soon have figured out the simple puzzles and are on to the same action with the same enemies and then get killed to endure a minute-long loading screen to the next level and you wonder what you did to deserve this. 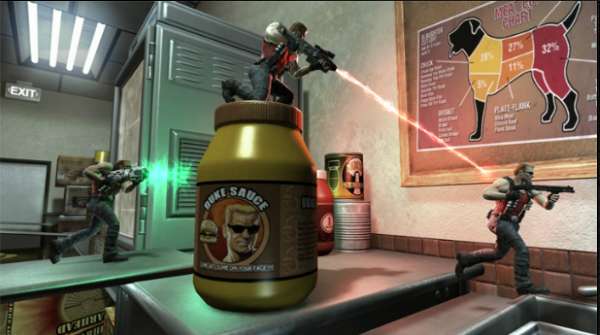 The funny thing is that you can see where all of the influence comes from. Half-Life obviously threw them for a loop and make them try for a more cinematic experience (as well as try some physics puzzles), and Halo was an influence on the weapons system and vehicle sections. But in trying to be everything Duke has forgotten what he was good at in the first place.

Ugly graphics and character models, repetitive music, same annoying Duke quotes. He still doesn’t have a single original line, and in fact most of them are repeated from the last game- you’ll hear the same Evil Dead, They Live and Pulp Fiction quotes over and over. The new ones are nothing special, unless you find it hysterical when he yells “You my boy blue!”

The constant slowdown doesn’t help things. Hell, the fucking cinema on boot-up sometimes has slowdown. Loading screens can suck up 30 seconds to a minute of your time whenever you enter a new area or die, so keep some reading material on hand lest you completely waste your life.

You’ll never play this again, if you even make it through it once. It’ll take you ten to twelve hours to get through it, normally a nice size for a single-player campaign but in this case just even more torture. The multiplayer is… actually somewhat fun. It’s nothing to drag you away from your first-person shooter du jour, or even better than the frantic Duke Nukem 3D multiplayer (that’s still quite alive and kicking on Xbox Live), but the matches are actually playable, way more so than the single player campaign. Plus, the jetpacks that don’t show up in single player show up here!  It has an XP system that allows you to buy new clothes and crap for Duke to wear as you level up (as well as items that appear in a Duke museum) but likely you won’t put much time into this.

If this game had come out in 1998 as originally planned it still would have been a massive disappointment. If I wasn’t reviewing this game, I wouldn’t have finished it.

This is no country for old Duke.