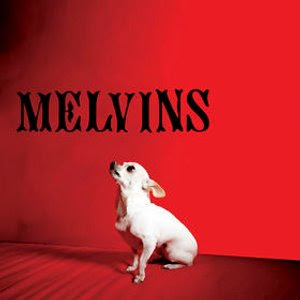 One thing I find wonderful about the age of digital media is the fact that an entire album (or sometimes albums) can slip through the cracks of your attention, a virtual five-dollar bill to be found later in, well, if not folded in the pockets of your blue jeans then sitting somewhere in a folder on a back-up drive, or buried in the endless quagmire of an itunes menu that is just too long to scroll effectively and try to find anything you’re not already looking for (thank mackerel for the search windown, eh?). This has been the case with a few things for me lately, where I think of or talk about an album ‘I’ve been meaning to get’ only to, a short time later, scroll through some virtual backwater and actually find said album.

This was the case with The Melvins 2008 issue on Ipecac records, Nude With Boots.

I’d listened to this, I’m sure, but I’d completely forgotten I had it. Unsure if I bought or traded for this (Bought! I mean bought Mr. ulrich! No more, please don’t make me trapped under ice again! AHHH!!!!) but when I found it I was excited. I’d come across the following clip recently and now that I found that I had the album the song was from it opened Nude With Boots to me like a fresh beer, and since then I’ve enjoyed it about as much.

The Melvins are like a lot of other heavier bands for me, in that if I’m not explicitly in the mood for them and I’m around them, I might give it a spin but I’m not going to fall head over heels in love with it until some time later when I stumble through the front door, scrambling over my CD’s looking for it in dire need. I never really know what sets those needs off; this time it was the one-two punch of finding the clip and then finding the CD. But it sent me running out to buy 2010’s The Bride Screamed Murder and that reminded me how, hot damn man, these guys have just been so on for the last few years.

Nude With Boots, The Bride Screamed Murder and 2006’s (A) Senile Animal are especially ‘on’ and unique even in the chronology of The Melvins’ twenty-album back catalogue that dates back to ~1983 in that starting with Animal The Melvins, who have always had a slightly shifting line-up, absorbed Washington-state stalwarts Big Business, so that the band became founder King Buzzo  on Guitar/Vocals and almost-founder Dale Crover on Drums/Vocals, bolstered by Business’ Coady Willis also on Drums/Vocals and Jared Warren on Bass/Vocals. As you might imagine, this made for all kinds of awesomeness, as Crover and Willis astound on duel skins, making everything heavier, groovier and, of course, LOUDER. It’s amazing to hear them play so well in time with one another. And then to take that equation and apply it backward to The Melvins catalogue…

Major label debut album Houdini is still, in my opinion, one of the greatest albums our there. A few years ago I was fortunate enough to see this two-drum edition of the band perform Houdini live in its entirety and all I can say about that is, ah, WOWBOBWOW. If  you’ve not seen them, please do, especially in this line-up, as it will probably eventually change again now that Big Business has become a four-piece machine of stoner destruction that will no doubt have more and more opportunities to do their own thing. And I don’t want to knock past line-ups The Melvins have had, but this band… this is just something else.

So in finding Nude With Boots the first thing to dawn on me that I somehow had completely missed previously was the cover of Dies Iraea, an ancient hymn probably best known by the version used as the opening theme music to Stanley Kubrick’s masterpiece, The Shining. The Melvins pull this off with chilling perfection, creating a hulking, staggering behemoth of a dirge, thick with the spooky malevolence associated with the track after the imprinting that Kubrick’s film gave it, but adding their own unique brand of hellish haunting, a tone that then recurs on the final two tracks of the album, ‘The Savage Hippy’ and, what might just be my favorite Melvins track of all time, ‘It Tastes Better Than the Truth‘, which sounds to me like the closest soundtrack I’ve ever heard for Hieronymus Bosch’s mind-alteringly terrifying paintings*. This thudding, howling, Goetian tome is all the more arresting in the context of the album, as it is woven sparingly through an album that otherwise has one of the lightest and, dare I say it, almost classic rock feels of any Melvins I’ve ever heard. On the album’s All Music page writer Jason Lymangrover compares opening track ‘The Kicking Machine’ to Led Zeppelin’s ‘Moby Dick‘ and yeah, I see it. In fact there’s Zeppelin and Kiss all over this album. And then there’s the devil’s interlude with ‘Iraea ‘before he comes back to drag you kicking and screaming down to hell for the final two songs.

How can you go wrong?