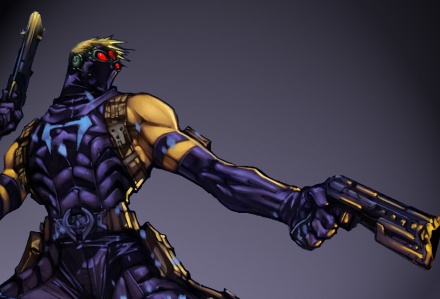 I didn’t have the problems with Thor that a lot of people had. Going into it I had originally expected about what I got out of the Incredible Hulk with Ed Norton, which I wasn’t floored by, but still enjoyed quite a bit*. And after the trailers began to surface several months ago my expectations sky-rocketed – I began to think Thor was going to really hit the mark and above, perhaps even something more in the realm of Iron Man. What I felt we ended up getting from Chris Hemsworth and crew was something pretty awesome. Maybe not on par with RDJ as ol’ Shellhead, but a comic book movie that worked pretty damn well, despite the potential handicap of its more cosmic mechanics. If Green Lantern, DC’s upcoming first entry into trying to build a yellow brick road to a Justice League movie, can come off even half as well done as Kenneth Branagh’s Thor, well, we’ll be in good hands**.

However, every Marvel movie (as in the ones made by Marvel – the one’s still being cranked out by fox before their licensing agreement runs out are a different matter entirely) since Iron Man has, in some respects, fueled one major fire for me, and that’s acting as lead-ins to the upcoming and eagerly-anticipated Avengers movie. That’s not to say I don’t want these flicks to perform well in their own right, which to Marvel’s credit that all have, on a sliding scale. But I’ve said here before that Marvel’s new grace and power lies in lifting the logic and structure of their comics universe into a new medium, even while their comics have all but stopped being anything but tie-in merchandising for that medium***. And the house of ideas has done a really good job of using each successive film to lay the groundwork to lead into the Avengers while, despite how they may handle each individual filmmaker, not sacrificing the individual films. At first this weaving together was accomplished with end-of-the-movie or after-the-credits epilogues; now they’re working in bigger pieces of the tapestry, and with Jeremy Renner popping up in Thor as Avenger sureshot Clint Barton, aka Hawkeye, Marvel really hit the ground running forward to next year’s launch of the mega-movie super team.

With all these other characters why am I so excited about Hawkeye? Let me ‘splain.

Hawkeye was, until Mark Millar’s early 2000’s relaunch of the Avengers with first two Ultimates books, a pretty standard, unreadable character – basically Marvel’s answer to Green Arrow-meets-Scott Summers. Boring, right? Now however… wow. The character has, to me, become the most fascinating of the Ultimates bunch, first and foremost because he appears to actually be becoming the Ultimate universe’s Bullseye. Since the murder of his familly in Ultimates Two Barton has begun to wear a bullseye on his forehead and experience close to uncontrollable rages***, questioning authority and amping up the violence and an escalating suicidal nature. In one scene he breaks off his fingernails and uses them to kill some people from a distance. In another he demands someone kill him. Nick Fury knows Barton’s a loose cannon and that he may be approaching a precipice that could lead to the dark side.

I’m telling you, I don’t believe anyone has acknowledged it yet, and according to the Wikipedia page for Bullseye there was another Bullseye in an Ultimate Elektra-something-or-other, but Clint Barton is the real Ultimate Bullseye waiting to happen. And if Marvel follows a similar progression with the volatile Renner – HOT DAMN is it going to make for some good stories! This is what I LOVE about the Marvel Movie-verse: they have planned well and taken their time and now we the fans get to reap the rewards with films that are plotted like comics. To my knowledge this has never been done befoe. The nature of the comic book publication paradigm makes it so writers or editors can plan long-haul, dropping in seeds here and there and slowly cultivating them into stories down the road (Chris Claremont’s Uncanny X-Men is still, in my opinion, the best example of this). Comic book movies have never been like this before – we’ve always been lucky to get what we get,often shitty-to-decent one-shots followed by reboot after reboot trying to just get it right (Punisher anyone? Took three times to get it right, yeesh!). But now Marvel is paving the way for a comic-book logic movie-verse and the appearance of Barton in Thor is the first ‘best’ moment from this new world. And there’s bound to be more. And I am enjoying every. Freakin’. Minute of it!!!

Now we just have to get them to start making good comics with these characters again****.

* For the record, I still enjoyed Ang Lee’s Hulk from 200-whatever, despite the Hulk-poodles. Norton’s Hulk did well not to re-tell the origin other than as a title sequence, picking up pretty much where Lee’s film left off, with Banner in the jungles of South America, this leaves it open for fans to either accept Lee’s movie as canon or replace it, no hard-line stance required.

** I hate to be a naysayer, but after seeing the trailer, I for one think GL looks… not good. I’ll probably see it, and admittedly I want it to work, not because I really like the character, but I feel bad that DC has been left so far behind in the Big Superhero Team Movie space race.

*** The one good thing I took from Jeph Loeb’s otherwise TERRIBLE Ultimates run, which I blogged about here and here’s another great take on it from a blog I like: Coffee Conversations Ultimate Marvel: You’re Ruining it Pretty Well Actually, Jeph Loeb

**** I wrote off my much-anticipated Millar Ultimate Avengers after the piss-poor story with the two Ghost Riders (the ones before it weren’t much to write home about either, although the initial one with Cap and the Red Skull was pretty good). I want to watch some of the stuff in the background, like Barton turning into Bullseye, but the stories have just not been good.