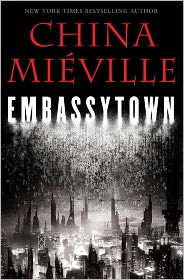 One of the things I like so much about China Mieville is his dedication to the Weird. Mieville, like H.P. Lovecraft, has a gift for putting things into words that are pretty much otherwise unspeakable. Now, obviously that implies a conundrum (one worthy of a Mieville story in fact) but it is a fact. If you take the first paragraph of Lovecraft’s The Call of Cthulhu as example you’ll see what I mean in the context of his writing and from there perhaps I’ll be able to better explain my thoughts on Mieville and his new novel, Embassytown:

“The most merciful thing in the world, I think, is the inability of the human mind to correlate all its contents. We live on a placid island of ignorance in the midst of black seas of infinity, and it was not meant that we should voyage far. The sciences, each straining in its own direction, have hitherto harmed us little; but some day the piecing together of dissociated knowledge will open up such terrifying vistas of reality, and of our frightful position therein, that we shall either go mad from the revelation or flee from the deadly light into the peace and safety of a new dark age.”*

You see this? There are concepts here that, like Lovecraft himself describes, normally do not congeal in the minds of people. I believe that although this is an excerpt of fiction it is also, in fact, a fundamental truth of the human operating system, and Lovecraft has stepped over it during the process of presenting it. That is, in a word, impressive.

Like Lovecraft China Mieville seems to have the uncanny gift of being able to wrap his head around concepts obtuse and irregular to the processing power of the human mind. Mieville’s Weird often percolates slowly at first; part of this is because the concepts are so strange and part is because he writes in a way that blessedly removes the exposition entirely from his characters’ mouths; you get the narrator’s attitude and reactions to the lay of the land in 2009’s The City and the City, but never with an explanation; none of that ‘finding-clever-ways-to-put-the-rules-of-the-game-in-a-character’s-mouth; no. Instead you read on and scratch your head until such a time comes as the advancement of the plot naturally reveals the parameters of the situation to you. This makes for some interesting reading, and nowhere is this truer than in Embassytown, released last week by Ballantine Books.

I’m at the half-way point now and Embassytown is easily the most alien thing I’ve ever read. None of the rules, mores or contexts of the setting, characters or events that transpire, first in alternating ‘Formerly’ and ‘Latterday’ chapters, are ever given to you. Instead the narrator, Avice Benner Cho, recounts events that only someone living in her city, on her planet, familiar with those places, people, customs and (here’s the big one) species would understand. Does this make the novel a bit difficult? Yes, but by now I know that with Mieville it is a good difficult because there will be a pay off and it will, literally, make my brain move and work in directions it never has before. If you’ve ever studied higher-dimensional geometry you may know what I mean. It is difficult at first to understand how to comprehend, with our stilted mental conditions honed by daily life on planet Earth with (mostly) Euclidean rules, but once you figure out a way to back around that corner and come at it from the side it opens up places in your brain you’ve never used before, or at least not while conscious. Embassytown has already done this to me plenty, with such a unique and again, alien conceptualization and examination of language that I’m feeling the holes of thirty-five years of programmed limitations in the way I think about words and what they are/mean bubble over and frothily present new avenues of understanding to me; avenues of exposition and connection snaking out and tying together into strange, mutant fauna left to rattle around in my head and help me see the world differently. That’s what Lovecraft began doing to me almost twenty-years ago when I bought my first worn paperback and that’s what Mieville has been doing to me since Perdido Street Station.

Lovecraft knew how to make the unspeakable synthesize in speech and the unrelateable relateable and for that I’ve always been able to look past his shortcomings as a writer and a human. Mieville goes a step further and uses his unprecedented concepts and executions, not to mention a vocabulary of the highest degree, to affect his readers’ minds. I’ve no doubt some folks start reading him and give up from frustration, while others struggle in the marrow of his fiction and come out… changed. So far Embassytown has been like finding a manuscript from a different world and slowly ingesting it, working out what is what from the littlest social structures to the pinnacles of world-building the author flexes with the deft skill of a futuristic anthropologist.

And I gotta tell you, it’s enjoyable as all hell.

Respectfully quoted here – Copyright obviously to Arkham House and the estate of the author and I will remove it if asked by said parties.