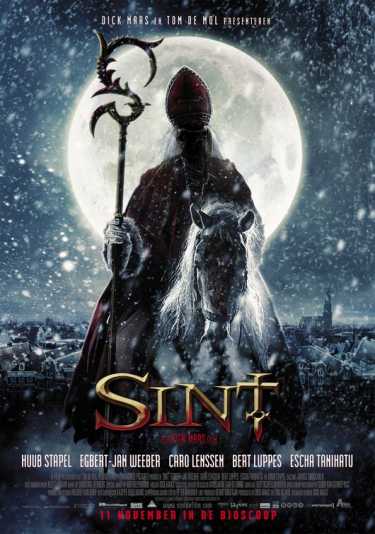 Think Santa Claus is a right jolly old Elf who toils all year to make toys for the little children just because he loves them?

If you know your history you’re aware that our legend comes directly from Sinterklaas (aka Sint), a Dutch figure who has some unique quirks. The carrots you left for Santa’s reindeer? They were gobbled up by Sint’s white horse which he rode over the rooftops, no sleigh required. The happy little elf helpers? The pasty white Sint had demonic black-faced helpers called Black Petes. December 25th? Everyone knows that’s a pagan holiday that was commandeered by the Christians- Sint is still celebrated to this day on Saint Nicholas’ eve on the 5th of December.

But hey, buy a tree and lie to your kids and don’t think twice about it, you shitty consumer!

Besides, it turns out that our legends were even further off base than we thought, as this film Sint (retitled Saint for U.S. audiences) shows that he was an actual bishop from the 1500s, one with a decidedly darker past. He and his men would anchor their ship near unsuspecting villages and steal all of their children for ransom (and worse). We see as one village finally fights back, burning the ship and all its inhabitants to the ground, but not before Sint curses them and promises to be back every full moon on his very special day.

Cut to a December 5th in the 1960s, where a family is celebrating with the usual offerings of food stuffed in socks to keep away Sint. Food in socks- is there any doubt why the man is angry? He kills the entire family except for a boy who was out of the house, and sets him up to be the annoying Dr. Loomis-ish know it all who tries to warn everyone what’s going to happen and how they’re all doomed.

Cut to present day. We’re introduced to a crowd of actors in their late-twenties playing high school students. Frank (Egbert Jan Weeber, 29) is a prankster who gets publicly dumped by his girlfriend, but it doesn’t faze him as it just frees him up to spend more time with Lisa (Caro Lenssen, 27), who he’s been seeing on the side. She’s an innocent Dutch girl who might as well be named Lotte Straude, and the film follows her around town as she hears stories from her friends about the boogeyman. They’re all getting ready for a party tonight, where Frank will play Sint himself and is hoping to get some hot young girls on his lap- really the only perk to dressing up in his outfit. Of course things don’t go quite well and the real Sint shows up with his Black Petes- and they don’t take kindly to their outfits.

While it appears to be doing a fairly straight and by the book Halloween rip-off to this point it takes a sharp turn and the character of Lisa is ignored for most of the rest of the film, the hero role instead falling to Frank. He naturally meets up with the guy whose family was killed by Sint 32 years ago and teams up with him to take down the horse-riding bishop. Naturally the cops don’t believe them and think they have something to do with all the murders happening around town.

It’s a strange decision to shift the focus to Frank. Part of the reason most slasher films use the innocent virginal woman as the protagonist is the idea that evil can be only be defeated by something pure and untainted. On a baser level, it’s easier to cheer for someone when you know that they’re a good person and don’t deserve to die. Frank’s a prick and you don’t much care if he succeeds or not- in fact, you’re secretly pushing for Sint to take his head off with that bladed staff of his next.

Sadly, Sint himself is pretty much a noncharacter. There’s a great scene involving a high-speed shootout as Sint charges across the rooftops, but it comes out of nowhere and is finished just as quickly. Mostly the character just shows up every once in a while to sneer with his burnt-lip eternal grin and besides that you don’t know what he’s doing, don’t care if he’s awake. Don’t care if he’s been good or bad so be goo- (cough)… excuse me.

The “Black Petes” are far more terrifying, nimble and fast and scary little racist stereotypes that pop out of nowhere to pull people into the shadows. Together as a team they spill lots and lot of blood, and the film delights in taking out anyone that gets in their way. Children are not exempted from the bloodshed, usually to hilarious (if incredibly dark) effect.

The one thing that the film has going for it is some really fun gore effects. There’s a pretty high body count here and lots of bladed implements are utilized in clever and fun ways.

Of course all of this could have been forgiven if the entire film was as fun as some of the more over-the-top kills, but it’s simply not. You feel like you’re being shuttled from set piece to set piece with nothing tying it together. You don’t care about the characters, Sint seems to be killing folks with no rhyme or reason, and a lot of the attempts at humor fail. Perhaps some of it is lost in translation but it’s doubtful, as what’s here is fairly juvenile (dildos are funny!). There are no scares besides a few jump scares as well, no sense of dread.

At the end of the day Sint is a lazy slasher film, nothing more, nothing less. It’s puzzling what it’s doing in a festival like Tribeca as it offers absolutely nothing new and feels better suited for the DTV release it deserves.


Saint opens at the Tribeca Film Festival on Thursday the 21st- check their site for more info.