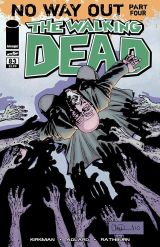 Note: I am always a month behind with my comics because I receive them in the mail from my good friend Mike Shin @ Chicago’s Amazing Fantasy Comics – nevertheless I as much as I wanted to tout specific events from WD #83 that made my fingers fly to the keyboard I have aired on the side of caution in case of Spoilers.

Although for myself the verdict is still out on the AMC adaptation of the comic book series by Kirkman, Adlard and Rathburn, the comic itself, which I have touted as my current favorite ongoing monthly title for years now and only maybe might have been recently bumped off the top of the stack each month by Costa and Gage’s GIJOE: COBRA book, just continues to defy all belief with its consistent quality of character, story and total ‘WHAT THE FUCK!’ moments pretty much each and every month. Currently embroiled in a storyline titled “No Way Out”, Rick and the gang are fighting for their lives after a relative calm period and the last four pages of the books put a sharp, violent chill blazing through my spine, tears in the corners of my eyes and an immediate need to go somewhere, anywhere to rant about it.

Robert Kirkman – I love you man.

All kidding aside, I don’t have anything against the AMC series except the season finale. I actually really liked most of the rest of the first season – when Kirkman warned months before its premiere that the story and characters would be somewhat different than the book I was excited, because I agree with him – it’s one thing to want to adapt a graphic novel pretty much intact for a feature-length film, it’s another to adapt an ongoing series from seventy-five issues in to an ongoing show. To do that exactly would have the fans basically on a delayed feed of complete re-hash. So yeah, by all means do new things, have new characters. Reverse engineer the show from the book with the benefit of hindsight and tie some previously nebulous things together*. I just thought the finale was a little too ‘big explosion end season 1, make folks come back for sure next year’, but that could be me. After another season I may see that the finale tied into something else in such a way as to justify the big ‘splosions. We’ll see. I might be critical, but believe you me, my mind is OPEN.

* POSSIBLE MINOR SPOILER
>
>
>
I’m fairly certain if I was reverse engineering the show from the book I’d give everybody’s favorite Governor a reason to hate Rick and his people… like say maybe if Rick had left him handcuffed on a roof in a way that required ol’ Govy to have to cut off his own hand. Just saying…