More of the same. That’s what Dead Space 2: Severed promises and delivers- a short yet satisfying bit of downloadable content that’s perfect for anyone who’s experienced everything Dead Space 2 has to offer.

Three years after the events of Dead Space Extraction, Gabe Weller thought he was finally past his experience aboard the Ishimura. Sure, getting over seeing dozens of people skewered and mutilated by the sharpened bones of their undead co-workers might take a lot of time and one helluva therapy bill, but he was getting on with his life, moving to a new home and getting a fancy new job working security about Io, the moon of Jupiter. Sadly for him he chose the location of the second outbreak of these so-called necromorphs, as Isaac Clarke found out during the events of Dead Space 2. How much bad luck can two guys have? Poor Gabe is in the middle of patrolling the mines when the alien infestation starts raising the dead and killing off everyone on the colony. He leaves his post to find his girlfriend and get off the station with the aid of his super-powered assault rifle and fancy one-eyed security armor.

Even with danger looming by every air vent things are worse than they seem, because besides these twisted creatures Gabe finds out that the station director has been performing experiments on his girlfriend (much like they did with Isaac) and they want to kill them both so the secret doesn’t get out.

Gabe’s story spans two short chapters and offers nothing new from the usual Dead Space experience. Oh, you will jump in fear, you will face moments of sheer terror, and you’ll dismember dozens of foes, but besides a new enemy type absolutely nothing else is changed. This is an addition to the game, a few extra chapters, nothing more. Gabe controls the same and can wield all the same weapons. The new enemy is actually an old one from the first Dead Spacethat didn’t make the cut in the second game- the “Twitchers”, fast creatures who glitch around the screen like Sadako from Ringu. A little bit of stasis and you can cut them down easily, but it’s easy to get swarmed by other enemies while focusing on them. CHUDTIP: Gabe's gun can dismember most any creature, so stock up on ammo. You won't need another gun.

The game offers a couple of new locations but most are recycled from Dead Space 2. Gabe is trying to escape right behind Isaac so you’ll see how a few areas fared after his swath of destruction, but Mr. Clarke doesn’t seem to have cut down the necromorph population significantly, that’s for sure. You’ll face tons of enemies in this very action-centric experience, but as with the retail game it’s smart enough to slow down for a moment here and and shove you in the dark (or flickering lights) to creep you out accordingly.

Gabe isn’t going insane like Isaac so there’s no visions or flashbacks and it’s played much straighter. But there are no real big set-pieces, nothing that’ll stick out in the memory like some of the bosses from the first two games do. The ending, however, is as memorable as these things get. It would have worked beautifully for the end of Dead Space 2, in fact…

You’ll need your disc to play this, so don’t download it unless you own the game. You start up Severed by going to New Game in the main menu and choosing the DLC- you’ll get a separate save and everything. 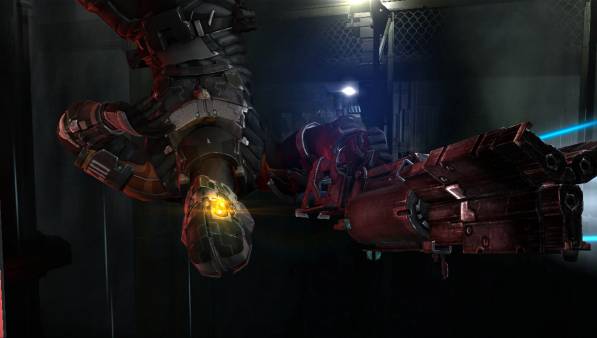 CHUDTIP- DO NOT ADJUST YOUR TELEVISION SET, GABE IS UPSIDE DOWN. HE ALSO HAS MUSCLES LIKE WHOA- CHECK OUT THE SIZE OF THAT GUN.

Not much, although it’s short and easily worth another go. The DLC comes with a bunch of typical achievements and trophies for beating it at ridiculously hard difficulty levels, as well as a few more for trying different strategies in killing your foes. You can probably get all of them in two or three runs.

One warning though- the name of one of the achievements/trophies gives away a pretty powerful story moment, so you might want to hold off reading them until after your first playthrough.

The first substantial piece of extra content for Dead Space 2 comes with a price tag of $7, which is certainly not bad for those of you thirsting for dismemberment without all that real-life mess. Just beware that you’re only getting about two hours of gameplay out of it. Still, it’s a solid two hours and if you are dying for more after the retail game, here’s your fix.