After twelve years wandering the galaxy Sci-Fi quartet Man or Astro-man have triumphantly returned to our meager planet to bombard us with their high-octane brand of comedy-infused surf rock! I was a regular Astro-man show attendee during their heyday in the mid/late 90’s at Chicago haunts like Empty Bottle, Lounge Axe and Metro and last night I got the chance to see them once again, this time in my new adopted home of Los Angeles at the Echo. Let me tell you about it.

First off, opening band The Octopus Project were Awesome!!! Also a four piece, The Octopus Project hail from Austin, Texas and sorta reminded me of a cross between Stereolab, The Flaming Lips and The Starlight Mints. Band members Josh Lambert, Yvonne Lambert, Ryan Figg and Toto Miranda play mostly instrumental music that utilizes some crafty sequencing and loops as anchors for energy-packed numbers that slams when they need to, freak out here and there and just generally makes you feel good to be alive and able to groove in the moment (hence the Flaming Lips reference). The guys in the band took turns playing every instrument on stage while their female counterpart Yvonne, who admittedly also did her fair share of instrument-hopping, focused mainly on working the keyboards, sequencing and really turning out a phenomenal performance with a Moog Theremin. And this wasn’t just a Theremin-for-the-sake-of-having-a-Theremin-situation. No. Ms. Lambert played that thing like no one’s business, essentially crafting the device so that it’s eerie, warbling tremolo served as an aria-style vocal at many points. The Octopus Project is a rejuvenating force in the indie music scene and I’m super happy that despite a late start heading out my wife and I were able to see their show in its entirety, which at one point did indeed feature an old-school Casio SK-1 Keyboard*. NICE!!!

Now, on to the Astro-men. Ah, so many good times seeing these guys in the past and now here they are again… and they haven’t lost a beat! Of course that could be because while they were together the band literally played hundreds of shows a year (apparently 500 just between ’94 and ’96**) – hard to break songs and performances honed to that degree. Regardless the show ran through about twenty songs from all across the bands’ repertoire and saw original members guitarist/vocalist Starcrunch, drummer Birdstuff and bassist Coco The Electric Monkey Wizard joined on stage by second guitarist Victor Vector. All four members moved like they always have, sometimes in unison, sometimes in wild and willy-nilly disarray, but always with that larger-than-life, delicious alien rhythm they pull off so well as they burnt through the Echo with classics like Invasion of the Dragonmen, Television Fission and Man Made of CO2. Everyone in attendance had a grand old time – Astro-man is a total good time band, partially because as extra terrestrials they had to learn how to play their instruments in a way so as to affect the ‘happy’ center of their human audiences’ brains, thus ensuring they were not discovered while their audiences were too busy rocking out to the awesome, reverb-drenched space-age sounds of some kick ass rock and roll music these visitors project.

And yes Coco set something on fire (the keyboard/sampler – it was AWESOME!!!).

And yes the giant Tesla Coil thing was there. How much more awesome can you be?

Could there be a new Astro-Man album in the future? Let’s hope so kids!!! Now what about an Servotron reunion?

* Inclusion of this device that Mr. Brown and I  once used to conceive and record an entire opera (I use that word loosely) based on the late George Peppard series Banacek with is a sure-fire way for a band to endear themselves to me in the moment, however I can tell The Octopus Project is going to remain in my heart for years to come.

** According to a fantastic interview with Birdstuff about the reunion here I read here. 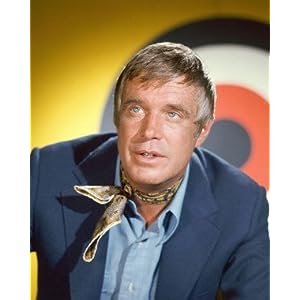 Read more about: Banacek, Man or Astroman?, The Octopus Project