This Week in Hollywood Stupidity: The Hunger Games, Wrath of the Titans, and The Eternal Hollywood Pissing Contest

Despite everyone’s best efforts, Hollywood is a far from perfect place.   Every week, hell, EVERYDAY,  Hollywood does something stupid.  And as a (somewhat) fan of logic and aptitude, I feel an obligation to complain about the stupidity.  Am I a pessimist?  No, I truly believe Hollywood can be an intelligent place.  Unfortunately, I’m a realist.  So without further ado, here’s This Week in Hollywood Stupidity.

One thing that I never quite understood about the studio system is its constant addiction to release dates.  Now obviously release dates are important; I’m not denying that.  However, why does a studio move a film from a perfectly respectable release date to a week earlier?  Well, in this case, it’s obvious;  Warner Bros. is whipping it out, and Warner wants all of Lionsgate to see it. This week it was revealed that Wrath of the Titans, the sequel to the remake of the original Clash of the Titans (there is so much wrong with that sentence), would be occupying a new release date a week earlier, March 23rd, 2012 instead of March 30, 2012.  Now initially, I would be fine with this move; however, another movie has already claimed this date for its own, the Lionsgate adaption of the bestselling book The Hunger Games.

What’s wrong with that, you ask?  Well, I think the answer to that question requires a little context.  Movies share the same release dates all the time.  It’s just the casualty of an overcrowded marketplace.  However, both Wrath of the Titans and The Hunger Games have a chance at being 100 million dollar blockbusters.  And honestly, Warner, what was wrong with the March 30 release date? It’s not like moving up a week will increase your box office draw by a substantial amount.  However, I realize what Warner is doing.  It’s something studios have been doing since the dawn of this new Blockbuster Movement.  It’s a thing I like to call “The Eternal Hollywood Pissing Contest.” Essentially, Warner Bros. has challenged Lionsgate to a game of chicken with their dicks.  Who’s the bigger studio?  Who has the bigger balls to stick to their ground?  And more importantly, why is Warner doing this? 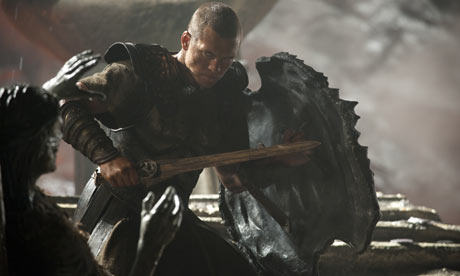 It’s simple; intimidation.  Warner thinks that claiming this release date for Wrath of the Titans will force The Hunger Games to move.  Basically, Warner Brothers is an enemy tribe who has expanded its territory into the land of Lionsgate, knowing that they are the bigger tribe and could easily squash them with their armies of Dark Knights and Sam Worthington robots.  Lionsgate, fearing the brutality and immediate slaughter from the Worthingbots, decides to leave their land and retreat to some other safe zone (possibly November or June).  Now Warner has not just a piece of the land called “March,” but all of it.  Warner’s conquest complete, they can know rest casually on the money slowly pouring in.

But what happens if Lionsgate tribe decides to stay?  Well, two things.  One, Warner and Lionsgate commit to a brute fight that CLASH the Worthingbots against the Everdeens (see what I did there?).  They end up killing each other, and the war would be an enormous slaughter for both sides.  The heaps of lost money pile upon both would be enormous.  Or two, one tribe kills the other and Warner or Lionsgate take the whole land.  However, the winning tribe faces heavy loses from the losing one.  If the two studios stay their release date ground, nothing good can come from it.

You may not think a week would make a difference.  But in Hollywood, it could make or break a film.  Regardless of what happens, I’m interested to see what comes from it.  Could Warner butcher a 200 million dollar franchise with the power of the Worthingbot, or will the powers behind Katniss Everdeen come through?

Read more about: Lionsgate, Release Date, The Hunger Games, This Week in Hollywood Stupidity, Warner Brothers, Wrath of the Titans