Reconciling My Love of The Police w/ My Hatred of Sting

Sting is a cunt. There, I’ve said it and if anyone disagrees with me just stop by your local record shop (hahahahah! like telling a kid to go find a Brontosauras) and browse the Sting section – most likely located smack dab in the New Age (Read: Finished) section of said store. Here’s my favorite to date, which I had to listen to ad nauseum two christmases ago at my old job.

* Anyone who poises themselves in such a manner is, well, a cunt. The image and posture is so manufactured, transparent for middle-aged and economically stable housewives: “Oh! what a solitary and deep man this Sting is darling! Look here he’s on a long, winter’s walk with just his dog, man and his canine companion, lost in thought at the edges of the world.

If you still need some convincing just listen to some of the music this man has put out in the last two decades. It’s the kind of bloated, self-important drek once-great rock stars employ as they age along with their audience and become co-opted by name-brand recognition, finding record sales are a lot easier to garner when they appeal to a wide range of people over the age of forty. In Sting’s case mix in a hand in the burgeoning New Age book/exercise movement with his tantra and, well…

You get a smug, self-satisfyingly bland musical act that barely recalls the wounded and frustrated, smiling-while-he-howls frontman of yore.

We’re a loooooonnnggg way from even the rich, ethereal melancholy of his first solo effort, 1985’s Dream of the Blue Turtle and galaxies from the pure pop-lined-with-a-bit-of-Rough-Trade bite that made up most of The Police’s career. Recently I came across a deal on all of those old Police albums (Zenyatta Mondatta was the only one that made the jump from cassette to disc for me; by the time I absolutely had to go out of my way to listen to a cassette Sting had simply obscured the brilliance of his former band for me) and have been, perhaps to the chagrin of my new, quiet and middle-aged Korean neighbors, listening to them non stop for two days straight. And I am led to ask again, this time here on my blog, to a wider audience than usual, just how could Sting, once leader of a band as awesome as The Police, turn out to be such a turd?

I know, I know – I tend to begin my rants and not take into account the fact that whatever public figure I am ranting about is more than just the public figure we know them as. I’m sure Micheal Moore is not an entirely overblown, rabble-rousing hypocrite more interested in securing his own status as a ‘safe’ counter-culture icon at the expense of the argument he once fought so vehemently to uphold and broadcast. Surely there’s a real person in there, concerned with aging and his own well-being, his love-ones well-being, security as the world tanks – those things I can understand and through them they reveal that the argument is never as one-dimensional as it often seems when we are up against status quo. Status Quo exists for a reason. Whatever, that’s an entirely different soapbox. The point is while a rant I’m separating the human from the brand, so to speak. Maybe not in all cases**, but most. But here’s the deal – when you give such great things to music lovers; when you blaze your name upon culture in such a way as a band like The Police, with their slightly Sci/Fi approach to crafting often slightly uncomfortable but ultimately undeniably catchy and well-crafted songs, well, tired rehashings of holiday standards, painstakingly banal and commercial-ready lite FM compositions and a rather irritating manner of expressing oneself (unlike fellow over-the-hill70’s rockers you haven’t been knighted sir – so sorry) doesn’t just not cut it, it insults.

So we, as the concerned record buying public of people who did grow up with your music but haven’t grown complacent or lazy with it will insult right back.

** Pretty sure Bush and Cheney are evil, chum-eating scum who value money, personal power and hubris over all else, sucking away at the cock of Mammon with gleeful idiot smiles on their faces.
* Need more convincing? Or perhaps you just want to laugh? Have at my friends, have at:

Another blatantly photo shoot, ‘talk to the camera’ moment. 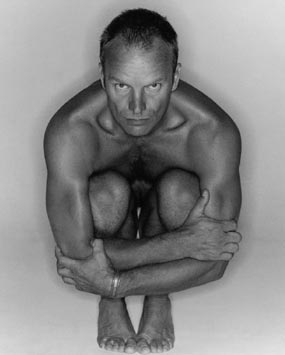 Creepy as all hell but I figured it would have to be seen to be believed.
And last but not least I don’t even want to attempt to explain this: