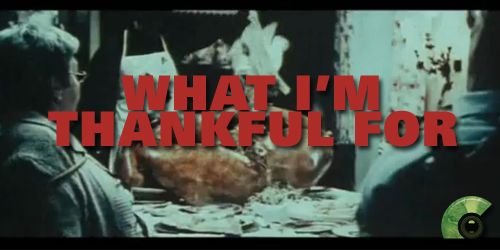 “You have to begin to lose your memory, if only in bits and pieces, to realize that memory is what makes our lives. Life without memory is no life at all, just as an intelligence without the possibility of expression is not really an intelligence. Our memory is our coherence, our reason, our feeling, even our action. Without it, we are nothing.”

That quote is from the opening chapter to surrealist filmmaker Luis Bunuel’s amazing autobiography, My Last Sigh, and it is a sentiment that really resonated with me when I first read it at the age of 19, well before I related to it on any level. The relationship between memory and fact has always fascinated me. Though frustrating, obviously, I’ve always been stimulated by moments where I am positive about a certain memory of my own life, only to be proven wrong by some factual evidence. And like every adult, as I’ve gotten older it amazes me what I manage to forget.

When I was a kid, I never understood why my mom would write the date on drawings I did. I didn’t get journals and diaries. If something was worth remembering, I’d remember it! With this attitude, it utterly amazes me that I ever created my movie ticket stub album, which is now one of my most prized keepsakes and a bizarre yet illuminating personal record of one incredibly narrow aspect of my life.

It was started somewhat by accident, born out of cosmic coincidence with the fact that I was a messy kid whose mom allowed to have a messy room. When I took ticket stubs out of my pocket, I’d just toss them on my dresser, and eventually they’d fall behind it. Every now and then I would have to clean my room, and I’d find a giant pile of ticket stubs, and toss them out. Then, when I was in high school, during one of these cleanings I was suddenly struck with the strangest thought…

Maybe I should save these?

Why? For what purpose? To what end? I had no clue. But I decided to do it. I went through the task of putting them in order chronologically, I found a photo album (the kind with the peel-away plastic covers and sticky pages), and suddenly my collection began. And I’ve never looked back.

At first it seemed kind of stupid and pointless. Wow, I have a full year’s worth of ticket stubs! But much like putting “Established 2011″ on the outside of your store, this sort of thing becomes increasingly more impressive with each passing year it continues. My book began with The Crow, which I saw on May 20, 1994 at 9:30 pm, at the General Cinema Theater in the Mall of America (Bloomington, MN). Back in 1994, I thought it might be interesting to keep track of what movies I was seeing in the theater, but I had no idea at the time what a time capsule of other information my album would prove to be.

Not only can I look back on what movies I saw, and when and where. But also how much the ticket cost, how a certain theater’s tickets visually evolved over time, and what other films I saw during the same period. There are films I saw multiple times in the theater that I only remember seeing once. Films that I would’ve bet money I saw months, even a year apart, that I saw the same week. And of course there is the nostalgia factor, when a tiny rectangle of paper might bring back a tidal wave of old memories about the circumstances in which I saw a film, and the people I saw it with.

Keeping a diary is a lot of work, but I highly recommend to everyone (especially film buffs) that they should start a movie ticket stub album. It’s incredibly easy, and it’s never too late to start.

Now take my hand and come with me for a pleasant stroll through some random selections from my album. Just click to embiggen. The first page of the album, and a delightful example of how fucking weird looking through these things years down the road can be. As you’ll note, there are 16 stubs on this page, but only 10 movies. Apparently I saw The Mask four times, The Lion King three times, and Speed twice. Here is where the correlation to memory becomes interesting. I noticed that the second Speed ticket stub says I paid $0.00 for it. That triggered a memory that this second viewing was part of weird sneak preview with Airheads. My only memory of that evening is that Speed started late and I got a round of applause when I threw candy at the screen in childish protest. As for the love of The Mask and The Lion King? Though I did love both those films with a passion at the time, I also wasn’t seventeen yet, so I have to assume that I was sneaking into an R-rated movie for some of those shows – something I didn’t start keeping a record of until nearly a year later, when I apparently didn’t want future me to think I actually saw the Chuck Norris family film Top Dog, so I made sure to scribble on the stub that I actually saw the Village of the Damned remake (thanks me of the past!). Those shitty little red ones are from the much mentioned on CHUD New Beverly Cinema. I went there a lot when I first moved to LA, as you can see. Ah, this one. I don’t remember seeing The Matrix: Reloaded twice, especially given that I didn’t really like the film. The fact that I saw X-Men 2 twice only two days apart is pretty squarely trumped by the fact that I apparently saw House of 1000 Coprses four times in twelve days, in two different states. I only partially remember how such nonsense occurred. I think I saw it the second time because I accidentally ditched a friend (who had told me he wanted to see the film) the first time around. Then the third time was on a date with a girl who herself really wanted to see the film (can’t say no to a pretty lady, right?). And I believe the fourth time I saw the film just cause I thought it was fucking funny how many times I’d already seen such a retarded film in such a short period of time. Oh, the memories.

For giving me such mysteries to unravel, and for allowing me to piece together memories that my brain can’t possibly be expected to keep track of on its own, I am thankful for my nerdy movie ticket stub album. Just because its not worth remembering, doesn’t mean its not worth revisiting.