That cover reminds me of when horror movies actually had really awesome poster art that just screamed “WATCH THIS MOVIE!” Even if the movie didn’t live up to the poster, at least they were creative in making it. Thankfully, the 1978 film, The Toolbox Murders lives up to the poster art. I know that’s the dvd cover, but Blue Underground is the Criterion of genre releases, and they almost always use the original poster art for their releases.

I had heard of The Toolbox Murders long ago, but I didn’t get to see it until the dvd was released in 2003. I saw it, thought it was ok, and then saw it again with my Dad before I returned it, didn’t think twice about it. A few weeks ago, one of the video stores that I’ve long frequented, closed down (I’ll be doing a blog on that soon). I picked up the very same dvd of The Toolbox Murders that I had rented, and only paid $2.50 for it! I saw it on a late saturday night not long after buying it, and it was like watching it for the firsst time all over again, except this time I was WOWED by it.

The opening scene with the creepy synthesizer music, as a car is being driven by an unknown person as the credits role is unsettling, then the movie starts with what it’s known for. I could write about it, but instead I’ll post a Youtube link to the first murder.

Unfortunately you will have to copy and paste it, since I can’t get the link posting tab to work, but the clip is quite disturbing. It also utilizes country music. I’ve read complaints about the country music that is used in the movie, and there’s a lot of it used. I don’t think it hurts the movie. If anything it enhances it, and gives the murders an even creepier effect. It’s just a shame that the music isn’t available on iTunes or c.d. or even LP. I’d certainly buy it.

The last “Toolbox Murder” is probably the most infamous, and well known. A beautiful red haired woman is bathing in her bathtub (start the tongues wagging gents) and the killer waltzes in with A FRIGGIN’ NAILGUN and starts blasting them at her. A psychologist would say that that’s a sexually repressed man using the nailgun as his penis, and the nails being fired out is his orgasm. Although we all know better than that, and it’s just a crazy guy firing A FRIGGIN’ NAILGUN into a beautiful naked woman. All the while a song called “Pretty Lady” is being played on the stereo.

There’s 2 other gruesome kills in this section involving a hammer and a screwdriver. It is The Toolbox Murders after all.

Then comes the other part people complain about. The second act is really slow. I mean SLOW. No killings happen, but in this humble blog author’s opinion, that is definitely not a bad thing. It’s really ballsy to set up the movie with these gory murders that all happen within the span of about 15 minutes, then have no killings happen until the last act. Although something interesting happens in this section that people wrongly accuse of being boring slow instead of being a great slow burn. We get to see into what makes the killer tic. This isn’t a whodunit mystery. We learn who the killer is pretty early on, and he’s played by character actor Cameron Mitchell. This guy. 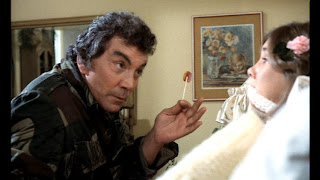 That’s an actual still from the movie. He trapezes into the room spelling out the word lollipop and starts talking to this girl that he kidnapped. It’s an interesting look into the mind of a man turned deranged after the death of his daughter, and wants to cleanse the world of dirty women. All the while sporting this cool ski mask. 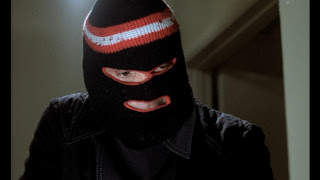 There’s a nice twist towards the end that you won’t expect, and the final image is haunting. Complete with a reprisal of the creepy/awesome synthesizer main theme. Definitely give this movie a look. Especially now that it’s October and Halloween is coming up. Watch this underrated movie and see master character actor Cameron Mitchell turn in a brilliant performance.

Rene’s song of the day: “Carolina In The Morning” by George Deaton