It's Not That Bad!: A Nightmare On Elm Street Part 2: Freddy's Revenge

My last several blogs have been recommendations of movies that I really like a lot. As I type this, I’m nursing a damn sinus headache that was brought about from my allergies that are in overdrive right now. A few days ago however, I came upon an idea to start a new blog series that I can do every now and again. I’ve been pegged on the CHUD boards as the one guy who watches basically anything and likes it too. I’m starting this new series to write about movies that I genuinely like, and others find atrocious. If you like it as well, high five! If not, bear with me as you cringe for my liking of this movie.

First up is this nice little gem. 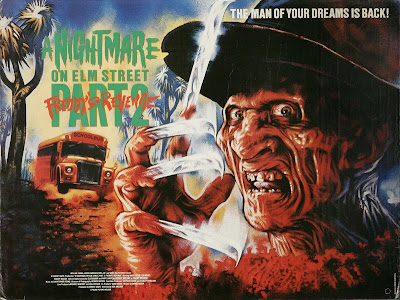 Yes, I’m talking about the second Nightmare On Elm Street movie that everyone has dubbed ‘The Gay One”. Sure, there’s a bunch of homoerotic undertones, Freddy “Getting inside” of the main character. The main character’s girly scream, His reluctance to go all the way with his girlfriend, Robert Rustler’s Limahl poster, the snake (Symbolic Penis?) that wraps around the main character, the S&M club, the Coach who gets bondaged up. Probably a bunch of other stuff that I’m missing.

Looking past all of that, the movie is actually genuinely good. It doesn’t use the Charles Bernstein composed main theme at all, but in it’s place is a really awesome Christopher Young score. Having revisited the first 2 Hellraiser flicks last week, the greatest thing to stand out is the epic music by Christopher Young. Freddy’s Revenge is no different.

The movie starts off simple enough with Robert Englund as a bus driver, and then the school bus goes off road, and we get bizarre imagery of a desert, and whale sounds that sound throughout the movie.

Apparently a very effeminate teenage boy has moved into Freddy’s old house, and Freddy wants to use him as a vessel to come out into the real world and wreak bloody havoc. The main character, Jesse, befriends a girl named Lisa and a guy played by Robert Rusler who becomes Jesse’s friend after he pulls his shorts down during a baseball game.

The whole movie is littered with great imagery. Jesse slowly begins to disintegrate mentally while his dreams become increasingly disturbing. He sees his room melting, Freddy burning stuff, along with confronting Jesse and telling him “You’ve got the body, I’ve got the brain!” and he rips off the burnt skin on his head to reveal his brain.

That’s another thing. People are always clamoring that Freddy was never scary in the sequels. Bullshit. Freddy was still one frightening monster in part 2. Maybe even more so than the first. he doesn’t joke around, and kills a bunch of people at a pool party. The gore is plentiful, and there are some really wince inducing moments, including the death by Marshall Bell by being slashed on the back, and Robert Rusler getting stabbed in the stomach, and having the blades dragged down.

More crazy imagery towards the end has Rottweilers with cherub faces, and a demon cat that heats a rat. This is all with us seeing Freddy saying disturbing stuff with his voice like “THERE IS NO JESSE! I’M JESSE NOW!” and close ups of his mouth speaking in Jesse’s voice.

This all leads up to a downbeat ending that definitely leaves things up iin the air if Jesse and Lisa actually triumphed, or if it’s just still in fact, a dream.

The movie also does something that none of the other movies, including the original ever did. End with a song that is not a rock song. It ends with Bing Crosby’s “Did You Ever See A Dream Walking?” That’s a perfect song to end the movie with, and I think when Michael Bay thought up of the remake, they put in The Everly Brothers “All I Have To Do Is Dream.” since it’s a nice old song that has to do with dreams. Just like Bing Crosby’s song. Even if he didn’t intend it, it’s still a great song.

Here’s some more images from the movie to use as examples of it’s greatness. 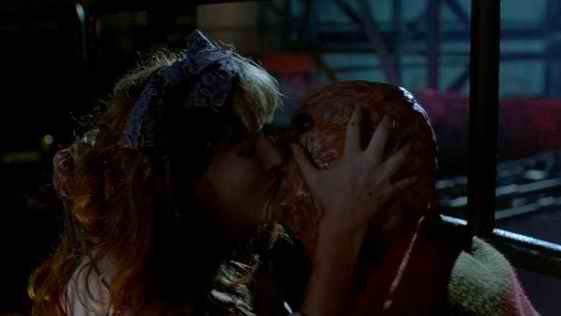 Yes, that’s the main girl kissing Freddy. Somehow the power of her love for Jesse lets him triumph over Freddy and take back himself. At least until just before the end credits.

I don’t expect everyone that reads this blog entry to be someone who likes this movie, but I hope at least that it gets more people to check it out and, that just that is good enough.