GIJOE: COBRA II. This book has consistently been gaining on, dare I say it, The Walking Dead as my favorite monthly.

I know, I can’t believe it either.

My initial reaction to my comic shop dealer Mike telling me I should be
reading this was, ‘ah, yeah, no thank you.’ I’ve a soft spot or Larry
Hama’s GIJOE continuity (most of it) and the idea that IDW was
jettisoning it for a reboot last year in conjunction with the film
turned me off. But guess what? I was wrong.

I still have that soft spot for Hama’s run – the research and realism,
in spite of having to write the book in the trenches of Hasbro’s toy
campaign, is impressive. Sure there’s some goofy stuff, but for the most
part Hama polished quite a few turds during his run. Sgt Slaughter was
introduced in a way where I don’t think they ever even mentioned his
name, and his relation to wrestling was, happily, completely ignored. As
was he after the entire three or four panels his arrival took up.

How’s that for a ‘you asked me to introduce a character, you didn’t say I
had to ever use him again’ kinda backhand at the marketing man, eh?

And
Serpentor? What more needs to be said, other than that what Hama did
with this character was great and one of my favorite eras of the book,
in spite of the incredibly ridiculous set-up he was given to work with
in the context of a mostly otherwise serious military book.

But now looking back Hama’s stuff seems almost cartoon-like in
comparison to what is going on at IDW. I haven’t read the other books they
have going for Joe, but GIJOE COBRA II is freakin’ amazing. So far it
is all special ops, covert infiltration and thus not flamboyant or
cartoon-like in any way shape or form. And what’s more, and this I love,writers Mike Costa and Christos N. Gage are all about taking the lamer characters from the mythos and making them amazing. Check out this image of Crystal Ball. Yes, Crystal Ball, one of the lamest characters ever. Not anymore: 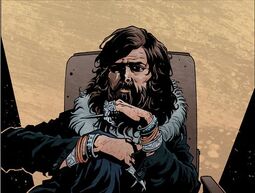 Is he based on Charles Manson (or Alan Moore perhaps?) or what? And don’t even get me started on how awesome Croc Master* is. And Serpentor? So far, a Scientologist-like new age guru with what appears to be Black Magick and human sacrifice as skeletons in the closet.

At some point I may switch over and begin reading the regular IDW Joe series as well, but I’m a firm believer that the more the books, the more the work suffers, just look at any Marvel franchise now. So for now, I’m sticking with the one that has actually made me have to choose between it and The Walking Dead.