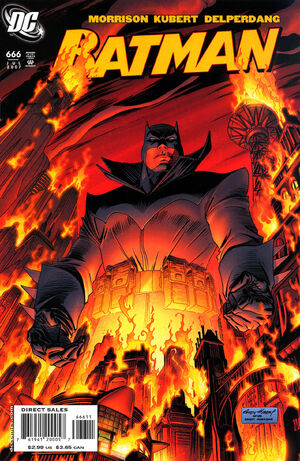 To sit down and read Grant Morrison’s entire run on Batman in one shot is something of a larger-than-life, consciousness-expanding experience, for the reader and for a character that gets a lot of grit and darkness but still usually remains within the common paradigms of the modern superhero story (usually). Beginning with issue #655 I read the book monthly, all the while not quite getting the bigger picture – this is common with Morrison’s stuff. It’s meant to feel a bit schizophrenic from the ground floor, but once you get that bird’s eye view things come together quick and often in that jaw-dropping, Sixth Sense kind of way. This means Grant Morrison books can actually grant two different experiences to the reader; the monthly and the collected. You get the issue-to-issue mystery and then the all-at-once rollercoaster experience later on, after its all finished. It definitely makes them worth your money and gives those of us who still buy monthlies a bit of a different experience in an industry where most everything is now written primarily for the trade (not that that is bad).

When I began reading the first book monthly back in ’06 I had a sense that a foundation was being laid for something HUGE. I hadn’t read a Batman book in years and frankly wouldn’t have again if not for Morrison, but once he came on board I became increasingly interested in what kind of Hoodoo he was working within the character’s world. Morrison has the ability to come into a long-running, iconic series and swallow its previous continuity whole, regurgitating it when he needs and putting his own particular spin on events that long time readers might have felt they knew inside and out. My own familiarity with the Batbooks had flourished and died between the years of 1989-1990, and even though I’d done a fair amount of research at that time I didn’t half of what I would find Morrison unearthing and molding into his strange, occult take on Gotham and its nightly avenger.

As with all Morrison books major events seem to occur off-panel; important events that alter the course of the story or the disposition of the characters. These ‘invisible’ plot threads then reference or become extrapolated upon, leaving the reader somewhat confused but deadly curious. It is this somewhat difficult approach to serialized storytelling that leaves many readers frustrated with Morrison’s work.

It makes the rest of us rabid, rabid fans.

Going back now that his arc has crested a bit (not finished, but at least in a position for some hindsight) the first thing I noticed was that the Zur-en-aarrh storyline that begins later, in the penultimate R.I.P. portion of his run, was programed into the story from the beginning. As early as the first issue the nonsense word that would ultimately prove to be a trigger to unlock Bruce Wayne’s ‘Failsafe Personality‘ is literally everywhere in the background of the gorgeously grotesque landscape of Gotham City. This adds to that initial sense the reader shares with Bruce, that from the beginning they are onto something BIG.

Also from the beginning there is a sense that invisible hands are being played in the background, especially with arch-nemesis The Joker, who seems to be moving toward the biggest game of his existence. A game that at one point finds him masquerading as a British crime novelist named Oberton Sexton and fighting at new Batman Dick Grayson and Bruce Wayne’s son Damien’s side. Somewhere in the aethers of this ever-evolving character’s dementia, however, is a lethal airbourne poison that threatens to claim the lives of all of Gotham City, and it is all tied to the mysterious Black Glove/Dr. Hurt character (s?) who may or may not be one of the following:

A) Bruce Wayne’s looooong thought dead father Thomas Wayne
B) A psychopathic, renegade military doctor a la Project MKUltra
C) The Devil (who apparently may be the recurring ‘big bad’ from almost every series ol’ GM has dipped his hands into)

I know this sounds a bit stiff, but suffice it to say one of the most impressive things is that although most of the references running through Morrison’s centipede-like plot seem new they’re all pretty much based on proper golden and silver age canon. He reduces some of the goofier stuff to drug trips, some to meta-reality and some to… well, I don’t quite know. Take this exchange between the Batman of Zur-En-Arrh and of all things, Bat-Mite:

Batman: “So how about one straight answer? Are you really an alien hyper-imp from the 5th dimension… or just a figment of my imagination?”

Bat-Mite: “Imagination is the 5th dimension…”

So although pretty much all of this is canon is beyond me, there has been some stuff I do recognize, and that’s really made me slack-jawed. Take for example Morrison’s references to an early-nineties Peter Milligan story wherein we find out Bruce Wayne had an ancestor in Colonial Gotham who, along with several historical figures, attempted to raise a bat-demon named Barbatos by sacrificing a young girl.

Obscure? Yeah, and that is the thing ladies and gentlemen, everything has been absorbed into Morrison’s continuity, so his becomes the only continuity in a way that both pays homage and integrates those writers that have come before him, but connects all of the disparate dots spanning decades of the character’s evolution.

Morrison’s soon leaving the Batman and Robin book I’ve been loving for two years and beginning something called ‘Batman Corps’. I’m going to attempt to stay with the B&R for a while and see how the new writer does, because I love the characterizations in that book sooo much, but yeah, Batman Corps? I agree that sounds a bit lame. However, that is what I learned long ago when someone put Animal Man into my hands in high school, before I’d ever heard the name Grant Morrison. The lamer the title, in Grant’s hands, the better the book will probably be.