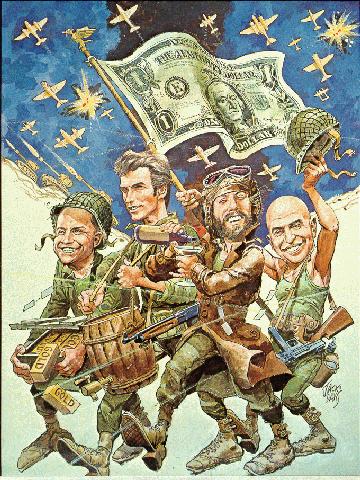 My Father has always had an interest in WWII. I saw Castle Keep, Anzio, and Night Of The Generals at a very young age. Where Eagles Dare has always been one of my favorite movies period.

Then there’s a movie another WWII movie with Clint Eastwood that I was introduced to in 3rd grade via TBS and went right up there with Where Eagles Dare as one of my favorite movies. I’m talking about Kelly’s Heroes. The movie that that friggin’ fabulous poster I have at the top of this Rene Recommend’s belongs to.

This is I believe (and I’m probably completely wrong) the first out and out comedy set during World War II. It has such bizarre awesomeness as DONALD FRIGGIN’ SUTHERLAND AS A HIPPIE. Of all of the characters in the movie, and there’s more than just one memorable character, His is the one that steals it all. He has such catchphrases as “Always with the negative waves, Moriarty!” and “Ruff! Ruff! Ruff! That’s my other dog imitation.” He’s just a laidback guy who doesn’t know jack shit about tanks, yet commands one, and does a good job at it too.

Don Rickles shows up as Crap Game, a soldier who makes a deal with Kelly to arrange all the provisions that they need for their excursion. Oh, and how can I forget to give a few tid bits about the plot? Clint’s Kelly after getting a German officer drunk, discovers that a large supply $16 million to be exact of gold bars is in a bank in a small town. He lets in on the scheme, Big Joe, masterfully played by Telly Savalas, and his small group of soldiers (including a hilarious looking little guy by the name of Barbara “That’s Babra, Sir!”) and Harry Dean Stanton who’s “Got the crabs.” They, along with Donald Sutherland’s Oddball and his group of Sherman Tank operators, embark on a mission to get this gold for themselves.

The movie is filled with many moments of comedy that are just gut busting. When Big Joe finds out that his superior officer cares more about getting a damn boat out of the countryside, and back home to the states, then the rest and relaxation of his men, leads to a hilarious speech that Big Joe gives about turning a barn into a nightclub, complete with booze, dirty movies, and showers so they can wash their cute little bodies. This last line he says directly to Babra, who he constantly refers to as Barbara.

The movie isn’t without it’s scary moments. There’s a tension filled scene where the men need to get through a mine field before a German Battalion gets to their point, and the ending sequence where they siege the town and liberate them is filled with action.

This all leads up to a spectacular showdown between Kelly, Big Joe, and Oddball, and a Panzer Tank.

SEE THIS MOVIE. These men implore you to.

Rene’s song of the day: “Burnin’ Bridges” by the Mike Curb Congregation.