Titan Books has put out a number of splendid poster art books lately.  They were responsible for the gorgeous The Art of Drew Struzan that I reviewed a few months ago, as well as Clint Eastwood Icon: The Essential Film Art Collection which sits on my coffee table (insofar as I have one) as we speak.

Their latest book is a little more lurid, and I mean that in the best possible way. The Art of Hammer is a fantastic collection of the horror house’s most legendary and controversial posters.  It spans from 1950 to 1979, and there are enough Day-Glo images of Peter Cushing and Christopher Lee to sate even the most diehard fan. They’re glaring from just about every page, framed by pouts, bikinis, and major boobage.  Oh, Hammer. No one did it quite like you! 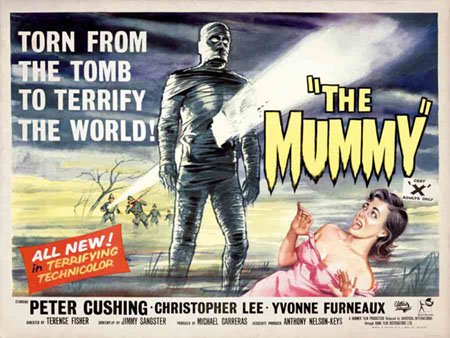 It’s not a perfect book.  It could have used some more text or history essays. One thing I enjoyed about ICON was its loving descriptions of each poster, and historical or marketing tidbits, and the way it explained the art against Eastwood’s career.   Hammer’s production is a pretty big and unwieldly thing to tackle, but I would have appreciated a little more meat to go with the pictures.

For example, check out the stunning poster for Dracula Has Risen from the Grave.  It sticks out among Hammer’s usual output for its photography and winking sarcasm. What’s the story behind it?  How did Dracula Has Risen from the Grave get such a classy and humorous piece of art, but The Witches and The Nanny got the typical schlock treatment? A puzzle.

It’s obvious where True Blood took some of its marketing inspiration though, isn’t it?

Fans may also be disappointed that a lot of them aren’t full page and
frameable. (Especially if you’re the sort that dismantles this kind of
book for ready wall art. I’m not. But many are!)  I suspect the reason
might be that many of these posters were enormous and quad-style, and
thus couldn’t fit a full page properly. I’m not sure there’s any way to
do proper justice to the double-poster of 10,000 Million Years B.C. and SHE anyway —  at least without making the book so damn big it wouldn’t fit on your shelf. Still, it’s layout is a marked contrast from both The Art of Drew Struzan and Eastwood: ICON which really consumed the page space, and sucked in the viewer.

Despite these little gripes, it’s a wonderful collection.  I suspect a lot of Hammer fans will use it as a catalog more than a coffee table book, and begin hunting down copies of their favorites.  For those unfamiliar with a lot of Hammer output, it’s like a treasure map of B movies.  I needed to see Prehistoric Women and Slave Women yesterday. I also need that poster on a t-shirt. Or a purse.   This isn’t art to just hang on a wall.  I want to wear or carry it. It’s just so shamelessly fun and cool, and deserves to be out in the world again.

But as I laughed at the breathless taglines, the busty actresses, and the terribly misleading art, I couldn’t help but feel a little sadness.  I feel like we all need to own these books, even the imperfect ones, because they’re such beautiful examples of boundless creativity.  Posters are marketing, and marketing is generally crass and cheap. Yet Drew Struzan elevated it to art. Hammer’s Tom Chantrell turned it into pure thrill.  Many of the ones who toiled under Hammer did so anonymously. But they never turned out something lame or sloppy. This was a statement. See this movie! Remember this poster!

And maybe see something besides the title, as in this famous and controversial piece:

Films used to inspire such recklessness.  Sure, it was based out of a sense of desperation — how else can you convince people to see Vampire Circus? — but there’s something so deliciously crazy, sleazy, beautiful, and delicious about what movie marketing used to be. Which is more deserving of your ticket, really — Dracula Has Risen from the Grave, or My Soul to Take? Based on the kooky enthusiasm of the marketing, I’d go with the former in a heartbeat.

Every page in The Art of Hammer has that unspoken sentiment.  Whether you eat, sleep, and dream Hammer or simply love what movie art used to be, this is a book for you.  If you have a friend or cousin who loves movies but sees nothing wrong with Photoshopped heads, then this is a book to be wrapped up with The Art of Drew Struzan and given as an assignment.  It’s not an essential book, but it’s a celebration, and you can never have enough of that on your shelves.

Titan Books supplied a review copy of the book. Thanks, guys!