MOVIE OF THE DAY: THE THIN RED LINE 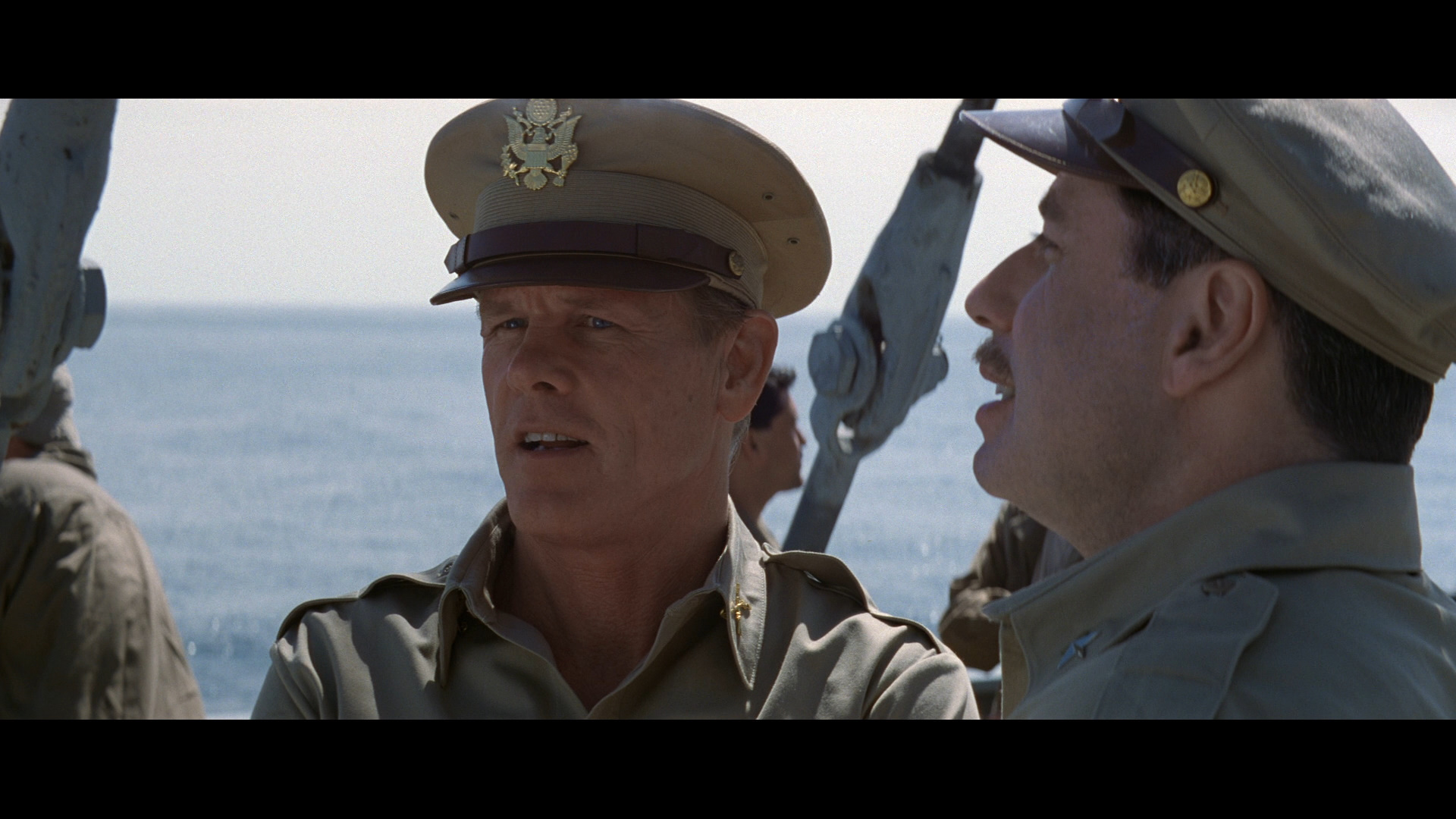 The Premise:  James Jones’s semi-fictional novel The Thin Red Line as adapted by one of the great missing auteurs of the 1970’s. Or at least, that’s what it appears to be from the outset, as the film mostly disregards the book. It takes its Guadalcanal setting and some of its characters for what amounts to Terrence Malick’s vision of war and its relationship to nature. Malick becomes interested in the conflict between Private Witt (Caviezel) who sees God in everything, even death, and the more practical side of 1st Sgt. Walsh (Penn) as the film becomes about a spiritual understanding of violence and the existence of God. Yeah, it’s fair to call the film pretentious.

Is It Good: Of course. The Criterion Collection just put out the film, and the film has always had an air of mystery around it due to Terrence Malick’s working process, which led many to believe there was a “real” five to six hour cut of the film, while cast members like Bill Pullman, Mickey Rourke, Adrien Brody, and others went from having larger roles to either being cut out of the film entirely or reduced to background. What I think the Criterion Collection release does (with the included supplements) is put the film into perspective. 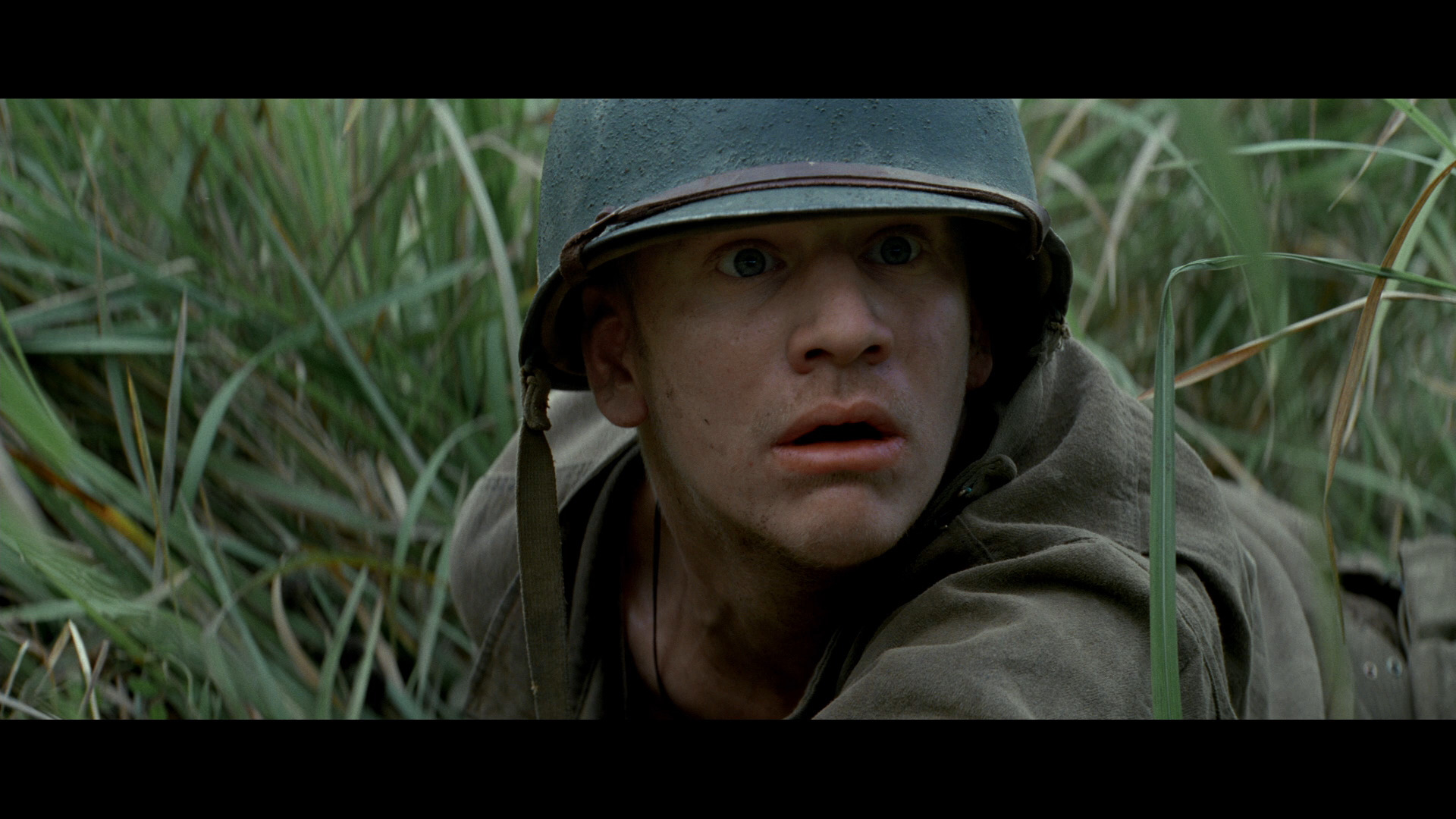 At the time, there was a resurgence of some older directors who left the scene for a while, as Malick – similar to George Lucas and Stanley Kubrick – took two decades off between projects. Malick spent the interim doing stuff like translating philosophy books, and keeping his face out of the public – he’s so publicity shy there’s essentially one picture of him that floats around- but his reputation based on his two earlier films (Badlands, Days of Heaven) was such that people couldn’t wait to see what he did next. His return was heralded, but – like anyone who takes a long absence – one wondered what would come of it. Like anything, creative muscles can atrophy. To make his war opus he had to assemble an all star cast (many of whom – like George Clooney and John Travolta – show up for a scene or less), but he also had to get back to the actual process of filmmaking

The editors and actors talk about his method in making the film, in which sometimes he’d have the actors play a scene with dialog, and then play it again silent. Malick talked about doing the whole film as a silent film, perhaps it was his response to the measure of planning and choreographing that goes with shooting action sequences. One of the editors talks about how Malick was more interested in the second unit work, which was getting Maori tribesmen playing around, than his own explosion-centric dalies. Malick shot (literally) millions of feet of film, and I’m sure there were numerous cuts of the movie, but in watching the Criterion edition, I got the sense that there was the movie Malick set out to make and the movie he found along the way, and the two don’t completely gel. There might be longer cuts of the film, but from the supplements I get the impression they would not be better.

The film starts in a dreamy, tone setting montage of life away from war, and then the preparation for it, and then combat, and that combat is a wake up call. The Thin Red Line comes into strong focus for the first two hours, as it sets up that the men are about to go on a perilous mission, with Dash Mihok’s character the everyman who is faced with the fact that he is not only being shot at, but allowed to murder other men. He’s in the middle of the dispassionate bureaucracy of Lt. Col. Tall (Nick Nolte) ordering men to die, and Capt. Staros (Elias Koteas), who cannot stand to watch so many of his men shot to hell by the entrenched Japanese. The voice-over narration and general tone may be too much for those who were hoping Malick would be making a genre effort, which is what Steven Spielberg had done earlier that year with Saving Private Ryan. No, the picture is meant to be a treatise, and so it feels wholly removed from other war films. But the chemistry of Malick staging war sequences gives the middle hour an intense kick, because it feels like he’s shooting these sequences as they have never been covered before (though the shifting of grass and light recalls similar tricks Kurosawa used in Seven Samurai). 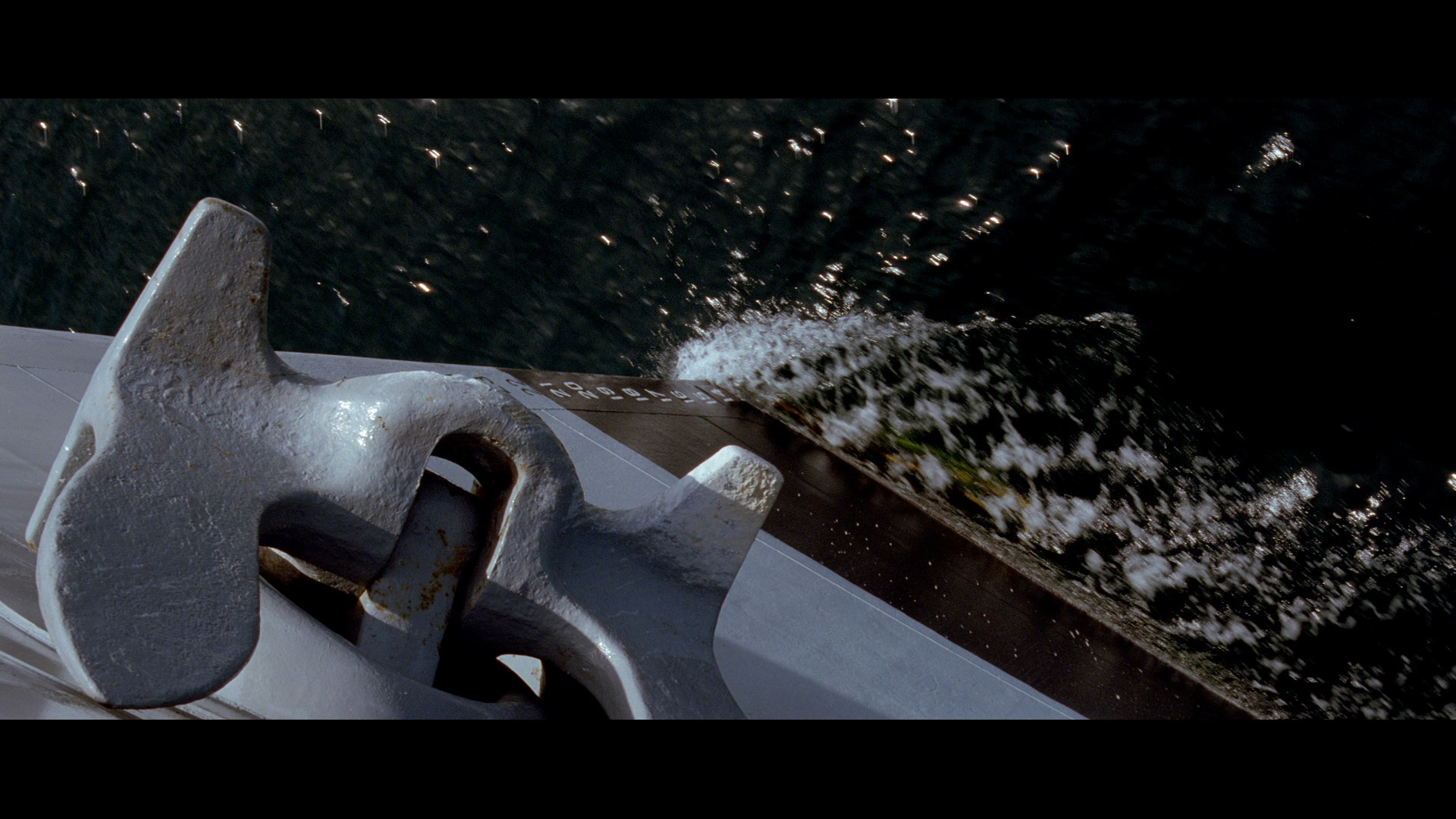 This siege gives the movie its narrative drive, and so when the men finally take the Japanese position, the next hour of the film is dedicated to dealing with Japanese POW’s, some R and R, and then the jungle pursuits that end the film. Though final third is in no way bad, the narrative thrust is over, so you’re back into Malick’s dreamy narrative state but without the threat of purpose.

With the perspective the Criterion edition allows, I think Malick just shot so much stuff that the film had to be of a certain size, and so the film keeps going. The beauty of this almost travelogue narrative is that there aren’t the same sorts of “beats” or moments one comes to expect from a war film. The discussion Witt and Walsh have never is addressed again by those characters, it’s the very discussion the film is having with the audience. Witt believes there is a God and see peace in the midst of violence, while Walsh does something heroic and wants no reward, because he sees the whole thing as about land. The film also shows Pvt. Bell (Ben Chaplin) and how he fought hoping to get back to a wife who he finds out wants to leave him. Though there is dimension to Notle’s Lieutenant Colonel, Malick is obviously uncomfortable with it. Sam Fuller, perhaps the greatest director of war films if only because he lived it, understood that war is about sending men to die. Malick sees no great truth in that. There is a lot to chew on here. 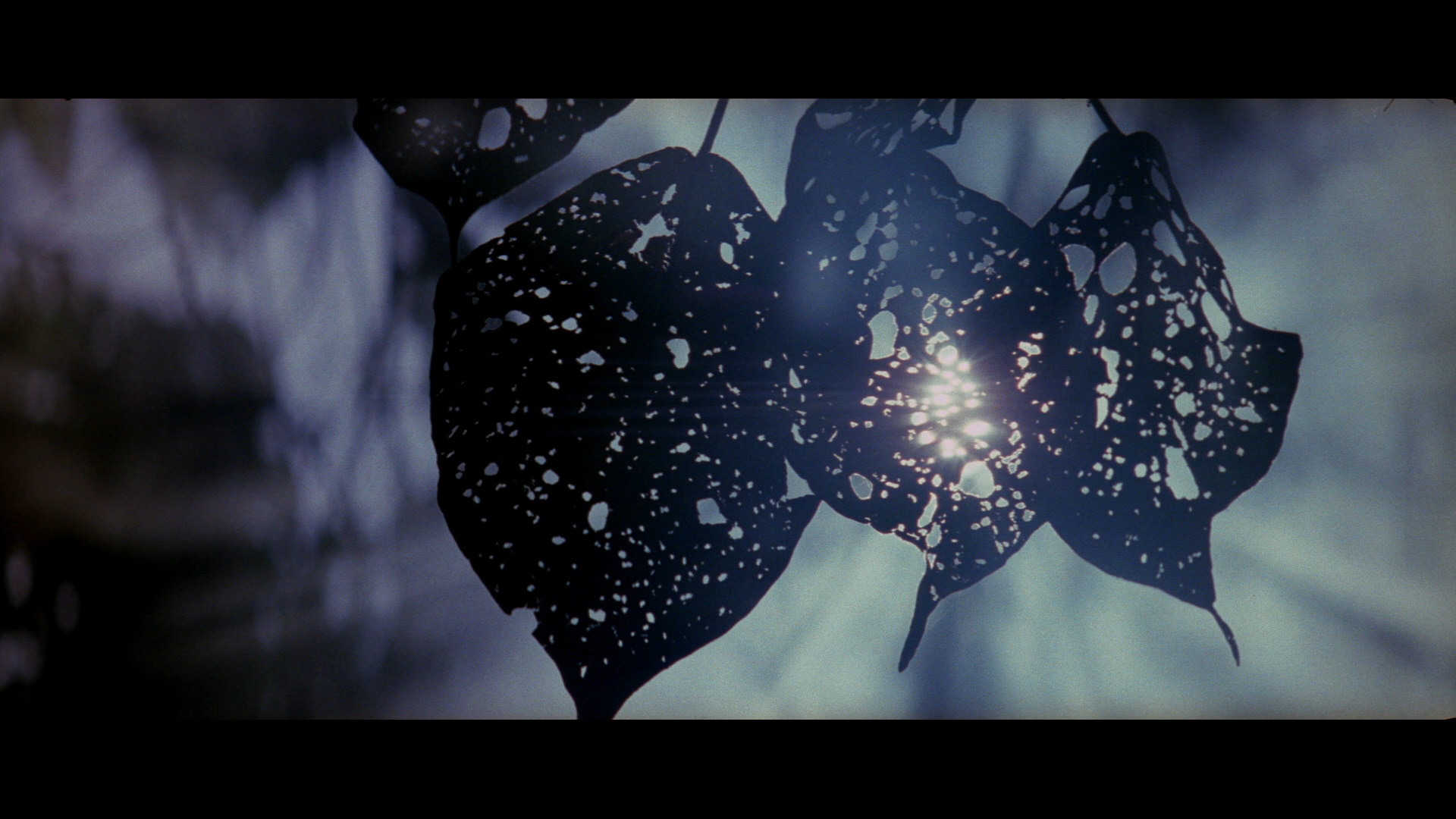 Is It Worth a Look:  Are you kidding me? The problem with auteurism is that I think this is probably Malick’s least film, though it’s great to see that making Thin Red Line re-energized him, enough so he made a film in 2005, has a film due out next year, and is already in production on his next (after a twenty year absence, this is productivity). But when you’re dealing with a director of Malick’s stature – warts and all – this is a singular and powerful vision. And it was shot by John Toll, who doesn’t make ugly movies, and you’ve got a score by Hans Zimmer, who when he’s not hacking it up can deliver. Watching it now, there’s so much to chew on, even if the seams of the production show.

Random Anecdotes: At the time and to this day, there’s still people who will argue the merits of Saving Private Ryan vs. this (or Shakespeare in Love). Artistically, I’m more interested in Malick’s vision than Spielberg’s – though both are great achievements. I hate to make the movie vs. cinema distinction, but I think it fair here that regardless of the “you are there” visual sense to the war scenes, Spielberg is making a classical war film (and it’s interesting how he undercuts and plays with that narrative), while what Malick was after is unlike anything before or since. Also of note: Billy Bob Thornton recorded a narration for the film which went unused, so did work by Bill Pullman, Gary Oldman, Lukas Haas, Viggo Mortensen, Martin Sheen, and Mickey Rourke. Rourke and Haas can be seen briefly in the deleted footage (all fourteen minutes of it) included with this disc. Everything cut was cut for a reason, though I liked Rourke’s brief appearance.