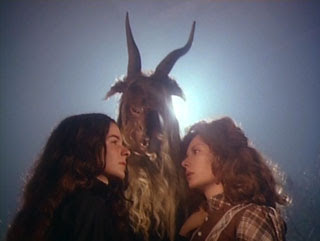 Wow, now that’s some picture, eh? Some of you out there will know the film Alucarda, the 1978 Mexican horror film directed by Juan Lopez Moctezuma. I did not until recently seeing it mentioned here:

Anyway, I’m always up for some Satan-themed horror so I hunted it down and took a peek.

For both good and bad reasons my reaction is ‘Wow’.

From the moment Alucarda begins it looks and sounds awesome. If you have a soft spot for the bright, grainy visuals and sinister, crackly audio of low budget films in the seventies this will not disappoint. The set design is amazing – all crypts and forests and ancient churches. There’s a bevy of iconoclastic imagery here and almost every single line of dialogue is delivered in a way that makes you wonder if the cast didn’t have a fortune teller clue them in that invention of samplers was right around the corner and that they would be prime targets based on the B-level of this sado-masochistic bizarro fest*.

The acting itself however, as well as the pacing leaves a bit to be desired. Well, to be fair replace ‘a bit’ with, um, ‘a ton’ and my guess is you’d hit nearer most people’s reactions. I am most definitely left wondering this: if it was possible for someone to calculate exactly how much time in this movie is spent with characters screaming would it be, as my hunch tells me, probably about a good quarter of the run time? That sounds like a lot but here’s the thing, the movie has a story, but it is a short and simple one; maybe too short and too simple. Without having to fear denoting a spoiler that story goes a bit like this:

Unfortunately though, despite the probably fairly lucrative potential for expansion here the simple tale is told even more simply then you might think. And fairly quickly. One hour seventeen minutes is hardly a ‘long’ movie and yet despite the film’s gorgeous stylings the screaming wears on you, the spinning and flailing wears on you, the oft-maddening ‘Satanic’ breathing gets a skosh irritating and the constant plot devices centered around getting the girls out of their clothes actually gets pretty darn eye-rolling as well. In a word, Alcuarda is a beautifully made visual treat that suffers from the director’s reluctance to deviate away from his sexual proclivities. This is true, in a much more passive way of most Argento movies as well, but his propensity for ill-fated teenage girls revolves around murder and torture where Alucarda alludes to…

Well, watch this ludicrously long clip and see for yourself. The flick still gets a thumbs up from me if for no other reason than nostalgic evidence of what film was rather than for actual technical or dramatic execution.

* The real thing that outweighed the good from the bad for me was hearing like a Ga-zillion samples I know from old My Life With The Thrill Kill Kult albums! I love stumbling across sample sources while watching old movies – so kool!!!