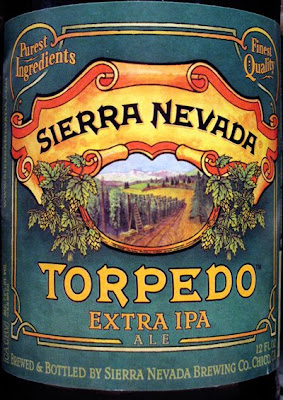 I go through my moods with beer the same way I do with music and movies – warmer weather brings out lighter brews such as lagers and ales while the year end creep into colder weather turns on my desire for stouts, porters and the like. Wheats and White Ales feel more like delicacies and can spring in and enslave my palette any old time because they’re so damn fine. The same is true of Pale Ales for different reasons – to me they Pales are more practical, functional beers – they’re good year round because they’re delicious, not too light, most being considerably fuller than lagers yet a hell of a lot less like a meal than other darker forms, some of which mentioned above, and pretty easy to come by. However IPA’s, or India Pale Ales are a bit more spontaneous with me. I love the extra bite – sometimes as I’m sure many Pale fans will attest your mouth wants a little something more. More of that hoppy kick up front, more of that rolling bite on the back-end. More body, more… well, more palette-fondling, lip-smacking, brain-mellowing goodness and once again the fine folks at Sierra Nevada have delivered just that with TORPEDO Extra IPA.

Torpedo doesn’t really have more body, but something about that exaggerated snappy Hoppy kick gives it the feeling that it does. It rolls over the tongue and slides down the gullet leaving a definite trace of itself over the entirety of the imbiber’s mouth. This is great if you’re in the mood not to share your palette with anything else, because once you quaff an IPA, and Torpedo in general, it tends to hold onto your taste buds for quite some time. Don’t get me wrong, there are fiercer IPA’s out there, i.e. Southern Tier’s 2XIPA (a modest 9.20% ABV – so hoppy it damn near hits the mouth like one of the skunkier brews) or Victory Brewing Company’s Hop Devil (not nearly as commanding as the Southern Tier, but it’ll hold your attention). Torpedo is a perfect medium – not as mellow as Sierra Nevada’s standard Pale Ale but not as palette-hogging as IPA’s such as those named above can be. Just right for the encroaching Springtime and the always relaxing possibility of drinking outside in the warm night air.