MOVIE OF THE DAY: LEAVE HER TO HEAVEN

The Premise: Smooth and suave novelist Richard Harland (Wilde) is en route to a ranch in New Mexico when he spies a stunning young woman.  She flatters him by remarking on how much he resembles her late father before promptly insulting his novel.  Shaken but stirred, Harland is delighted to find out she’s actually living at the ranch he’s vacationing in.  Ellen Berent (Tierney) is sexy, mysterious, impulsive and decidedly eccentric.  She promptly dumps her fiancee Russell (Vincent Price) and marries Richard after a whirlwind courtship.  They retreat to his palatial New England lodge, and are living in cool bliss.  But Ellen grows restless, possessive, and unexpectedly jealous of anyone or anything that Richard cares for ….

Is It Good:  It’s delicious.  Like a lot of women, I tend to react negatively against cinema’s crazy female stalkers because they’re pathetically sexist. Play Misty For Me and Fatal Attraction are largely built around the conceit that the sex was so awesome it unhinged the lady’s mind. Obsessed replaces sex with flirting which is even lamer, and a sign of our puritanical times.  But Ellen is the kind of villainess I can get behind.   She’s so calculating and elegant in her cruelty that I’m convinced she could dispatch the shrieking ladies of Misty, Attraction, and Obsessed without smudging her luscious lipstick. (She would then powder her nose, choose between Dave, Dan and Derek, and keep the other two around just in case.)

I’m not rooting for her, mind you, but her anger and obsession isn’t triggered by a few nights of great sex. Her obsession is ostensibly based around Richard, but her issues run far, far deeper than that. She’s cold, cruel, and selfish. It’s about competition and destruction.  Her dangerous nature hangs like a noose over that New Mexico ranch, and you can feel her family waiting to see what she’s going to take a violent and nasty fancy to.

Is It Worth A Look: Of course it is.  When people wax poetic about the Golden Age of Hollywood and the roles it boasted for women, this is exactly the kind of film they’re talking about.  Ellen is a juicy and uncompromising role — Heaven doesn’t fade to black at any point during her machinations — and the film never backs down for the innocent bystanders. There’s no way this would be greenlit today, not without radical changes to the script.

Even if it wasn’t a good film, it would be a feast for the eyes. The Technicolor is absolutely stunning.  It’s some of the best colorwork you’ll see outside of Powell and Pressburger or Douglas Sirk. It’s remiscient of Paul Hesse’s photograph work. 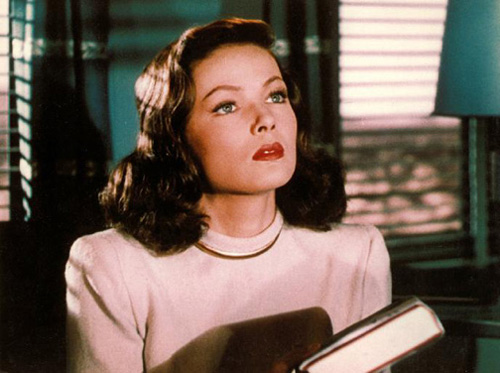 Finally, Gene Tierney shines in this film, as she did in just about every movie she ever made. It’s a shame the wider public has largely forgotten her. She was one of Hollywood’s It Girls, but she lacks the kind of catchy quote or flashy scene that makes it into those Great Film Moment montages that keeps Katharine Hepburn, Bette Davis, Marilyn Monroe, or Audrey Hepburn in the marketable consciousness.  She also had an incredibly sad life that really overshadowed her career.  But TCM devoted 24 hours to her last week, so perhaps she’s going to enjoy a renaissance.