You may recognize actor Ryan Merriman from a variety of roles in film and TV, including Final Destination 3, The Ring Two and as young Jarod in the show, The Pretender.  He’s got his start in Hollywood at a young age and has worked steadily, racking up over 30 IMDB credits over the last fifteen years or so.  I had a chance to talk with him recently to promote his upcoming TV movie, Elevator Girl for the Hallmark Channel.  We discussed things ranging from the Oklahoma State Cowboys, to close calls with death, to love in an elevator.


You got into the industry as a child actor.  Can you discuss the pros and cons about that type of adolescence?  Do you feel like you missed out on anything or was it a good experience? 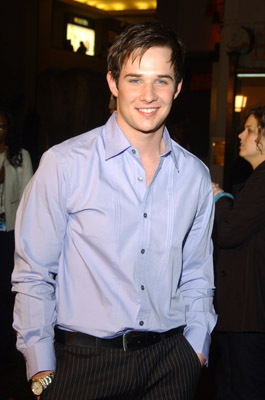 I think for me it was the best thing because I kind of just gradually…almost tiptoed into it.  I started to do some commercials, doing some theater, to dance and sing.  That led to acting classes and getting a manager.  And so it was a nice gradual thing.  Nobody pressured me to do something over my head.  Then luckily, my first pilot season, I booked a pilot.  And now that I’ve been doing this so long, I know how rare that is…to book a pilot your first pilot season, and to have the show go for four years.  And then right after that show got canceled, I got on The Pretender for another four years.  So, really lucky, really blessed.  It’s always like that in this business: “right place, right time” kind of thing.
Your new film is called Elevator Girl, co-starring Lacey Chabert for the Hallmark Channel.  Can you explain the premise?

I play a young, hotshot lawyer, up and coming, always focused on work…the right job, always being on time.  Always planning everything basically.  Then I meet Liberty Taylor (Chabert) and she’s an art teacher, she’s a dance instructor, she’s a masseuse, she’s a culinary student…very free-spirited.  And we end up getting stuck in an elevator.  And we’re kind of forced to engage each other and after a while we end up forgetting we’re even stuck in an elevator and from then on it becomes a romantic story.

Will we be seeing any “love in an elevator” in the movie?
Maybe (laughs).

You’ve been in several horror films, specifically Halloween: Resurrection, The Ring Two and Final Destination 3.  Looking to do any more of that type of film?

You
know, I did…for a while there…so many back to back.  I love that kind
of acting, the very intense, action, thriller stuff.  We’ve definitely
tried to stay away from the horror.  There’s always a fine line between
thriller vs. horror and we’re kind of focused more on the thriller [at
this point].

Have you ever had any close shaves like you did in FD3?

I’ve had a couple car wrecks with some buddies that I’ve just literally walked away from and you just go, “Whoa.”  Other than that I’ve been pretty lucky.  And couple of skiing and snowboarding moments where I went, “Oh shit!”
I know you’re an Oklahoman, and Oklahoma is right in Tornado Alley.  You have any harrowing tornado stories?

I was a actually out on the road for one.  And I literally was driving down a country road heading home and you could see it dropping down into a field a few hundred yards away.  It was freaky.  And the wind around that is around 70 or 80 mph.

Oklahoma Sooners or Oklahoma State Cowboys?
I am a Cowboys fan.  My wife was a cheerleader there.

You got a Cowboys cheerleader?

Nice.  Since you are an Oklahoman actor, I have to ask, have you ever seen the musical Oklahoma!?
Oh, of course.  I’ve never been in it though.

Yeah, you know, [The University of] Tulsa.

Oh.  You know what, I cannot.  You talking about their mascot?
Yeah. Although it sounds more like a drink.
You know, I don’t know.  I never gave it much thought.

You trying to get some more film production in Oklahoma?

It’s really been picking up, to be honest.  There’s been a lot of stuff shooting in Oklahoma, as there should be.  There are mountains, there are plains, cities, a desert.  People don’t realize how many…there’s swamps in Oklahoma, rivers, lakes.  Aesthetically there’s so many different climates.  I think it’d be great for movies, man.  I actually helped pass a tax bill [for filming].  So that was pretty cool.

Getting back to Hollywood for a minute.  You once did an episode of Smallville didn’t you?  A racing episode?

I did.  Yeah, actually, I had a little development deal with the WB.  They ended up not doing anything with it, but they wanted to get my face on the network.  So they put me on that Smallville episode, which was fun, man.  Such a machine, the production on it.  yeah, it was awesome.

Did you get the chance to snatch any kryptonite souvenirs?
You know what, I didn’t because they used kryptonite in the cars and it was never something we handled.

There’s so much of it on that show you’d think they just have it lying around.

Well, yeah, it’s like it’s stockpiled somewhere.  But I got to race a car and play a badass and make out with a racer chick.  Tom Welling was fun on that show.

You’re involved in several charities including the Children’s Miracle Network, Infant Crisis Services, and the James Redford Institute for Transplant Awareness.
Yeah.  With Children’s Miracle network and Infant Crisis Services, it all started with my cousin, who was born about four months premature, did the incubator and everything.  You know, I just saw how much care had to go into that.  They said he’d never walk, his eyesight would be horrible or even blind.  But now he’s 16 and walking around like a champ.  So I got involved with that kind of early and my mom now works for them.  She helps put together fundraisers and things for them.  And with the organ donation, I did a movie with Jamie Redford, who was saved by organ donation [a liver transplant].  And then my wife’s brother is in the Army.  He’s a West Point graduate, and that’s how I got involved with [a charity] for the troops.  Also, being an actor, there’s so much down time, it’s nice to do something and if people want you there [at a charity function], it’s an honor.

I checked your IMDB page and on the message board and there was a girl who worked at California Adventure who said about five years ago she recognized you and she wanted to jump you ahead in the line for a ride, but the seat she thought was empty wasn’t, so she had to put you back in line.  What I took from that story was: do you use your celebrity for good or for evil?

(Laughs)  You know, I never use that…I never use the whole “do you know who I am thing.”  It’s not in me; I can’t get that sentence out.  But I mean, of course if someone is like, “Are you him…and they want to hook me up, you know, why not.”

Yeah, you’re not stupid.
Yeah, but no, I never try to dangle that in front of somebody.  But I will take a picture anywhere…I can’t tell you how many times I’ve been at dinner and taken pictures with people.  It’s part of the job and I’m just glad people care, you know?

What’s on the horizon for you?  What’s upcoming?

Well there’s Elevator Girl premiering this Saturday on the Hallmark Channel, and then I’ve got another film that I shot in North Carolina, which is kind of a “Hoosiers meets Bottle Rocket” with Haley Joel Osment called Home of the Giants.  And it’s set in Indiana, funnily enough.  It’s about the Indiana high school basketball championship and the things that the lead player goes through.  It’s great.  It’s one of my favorite movies I’ve ever done.  It comes out April 6th.  And then I did another movie in North Carolina at Wake Forest.  It’s a true story about [Jon Abbate] of Wake Forest called The 5th Quarter.  It’s a football movie with Aidan Quinn and Andie MacDowell.  And we’re hoping that that gets distribution and gets into theatres.