Occasionally I find something that I think is the best thing in town and then I decide to write about it for you. It’s also been a while since I’ve embarrassed myself on this forum. In the past, I proclaimed my love for cramming handfuls of Jelly Belly jelly beans into my face. Now it’s something else:

Some months ago, my best friend and I discovered and immediately fell in love with Scrabble on Facebook. It allows us to have about twenty games of Scrabble going on at a time, and we can title them the most politically incorrect and messed up things we wish. The i-Phone gods decided to create and gift us with an app that allows me to play the Scrabble games that are linked to my Facebook profile on my phone. Instant mobile Scrabble. And I’m lovin’ it. 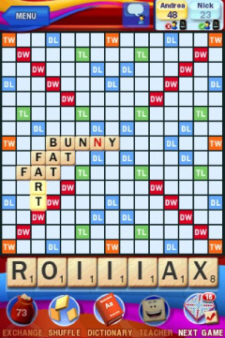 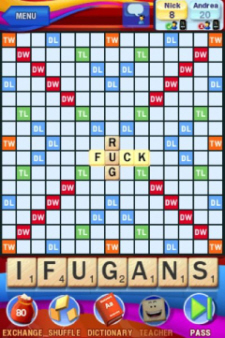 Whenever either of us are taking a nice poop or waiting in line at the post office, we’ll send the load of them back to the other person. Sometimes the line in Target will allow me the time to send three back, but it keeps me from looking at grandma’s fat, sweatpanted ass in front of me for five minutes.

I enjoy the remote and jagged sense of friendship it allows. Occasionally, I’ll get a scrab request via text and I’ll interrupt what I’m doing to send a batch of them back to a friend in need. I make sure he has the entire batch before he goes to sleep, and I make sure I send them back so they’re waiting for him in the morning.

We have our rules for fair play. No dictionary allowed. You can’t use the word unless you can already define it. And we play with a two-letter word list that has redefined the game for me. I have games going with a limited number of other folk, and I can tell when they use the dictionary. Not kosher. An idiot can use the dictionary. I have no opinion on this.

What’s more than the games is the fact that we can title them whatever we want. Here is a random sampling:

We share a love for words, and Scrabble lets us be that kind of nerd. I feel a case of bad-ass mixed with luck when either of us create “Scrabble Nirvana” as he calls it. This is when we get to create word combinations that include “poop” or “incest” and the like, maturity be damned. We feel a surge of pride.

Now it’s your turn scroll up, point at my seaweed crotch, and judge me for being a nerd and for devoting an entire blog to what is damn near an inside joke when I could have talked about more art, my past, or even films. Is this a confession? I’ll stand behind it. I like my leather dicks and musicals.*

*have fun with that.