Bioshock was without a doubt my favorite game of 2007. In a year filled to the brim with incredible games, it offered unsurpassed gameplay, atmosphere that absolutely oozed out of the screen and one incredible twist that played on a gaming convention most people take for granted. It brought us to a world like never seen before, a strange city under the ocean where objectivism was allowed to run rampant, becoming twisted and distorted and making monsters out of all the individuals within.

It introduced the world to Big Daddies and Little Sisters and managed to craft a game that allowed you to kill little girls and not receive any flack for it, an amazing achievement if you think about the nonsense that the media likes to latch on for a story. Better than that, it made you actually feel guilty for even considering it. When was the last time a game brought up that emotion in you?

Now, PS3 owners can finally see what the fuss was all about.

THE PITCH
It’s Bioshock for the PS3. The only differences? A lengthy installation, a new difficulty mode, and exclusive DLC.

Otherwise, it’s the exact same game everyone fell over themselves for last year.

CHUDTIP- It’s always wise to avoid a direct confrontation with a Big Daddy. Set up as many trap bolts and mines as you can when you want to take one down, and keep electric buck handy for when it gets too close

The PS3 has no noticeable improvements or shortcomings- this is the same exact game. Even a year later it still holds up as one of the best-looking and sounding games around. If only more games had the incredible level and sound design of this one.

THE REPLAY
This is the kind of game you’ll want to pick up once a year and play through it just to remember all the amazing bits. I started the game again on PS3 just to remember what it was like and ended up being hooked right in once again. It’s still almost goddamn perfect.

The only big change to the game is the inclusion of an even harder difficulty mode, Survivor Mode. You thought beating Hard mode without dying to unlock that achievement was tough? Just you wait. Any enemy can easily kill you here, and you better make damn sure not to waste any ammo, because it is tough to come by.

Along with that, there is some just-released DLC for the game. The $9.99 Challenge Room pack contains 3 brand-new levels, including some deleted materials that were shown off in the art book (available online for free here). 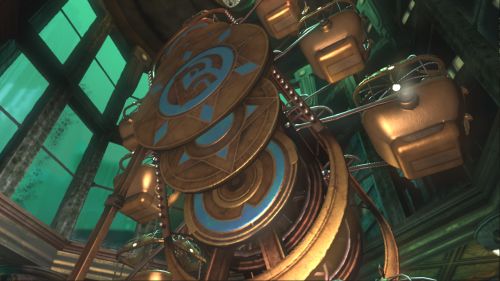 CHUDTIP-
It may seem like a good idea to take your Little Sister to the fair,
but really it all just ends in death and screaming and people being
poked with needles.

Like the new difficulty mode, these levels are made for experts, so if you’ve never experienced Rapture you’re going to quickly get decimated. “Take The ‘I’ in Team”, the first level, has you trying to save a Little Sister from her Big Daddy who has gone berserk. You start the game with no weapons or plasmids of any sort and have to explore around and find materials to open all the locked doors and take down the Big Daddy. It’s quite tricky and takes a bit to figure out but once know what to do you can run through the level in a few minutes.

The second one, “A Shocking Turn of Events”, is similar. You’re trying to save a Little Sister who’s stuck on the top of a Ferris wheel. To get her down you’ll have to power up a switch 6 times, each turn bringing her one step closer to the ground. This level has you trying to find any means of electrifying the switch, whether it’s by tricking an enemy into hitting it with an electrified wrench, shooting it with electric buck, or other methods.

The last room, “Worlds of Hurt”, is absolute brutality, and 10 times the length of the other levels. Unlike the others this isn’t a puzzle-based level- it’s all about combat here. You’re trying to save another Little Sister, this one who’s trapped in a room surrounded by 8 doors. Behind each door lies a group of enemies, everything from packs of Big Daddies to Splicers to Turrets, or even mixes of them all. The first run-through will probably take you about an hour. You can choose the difficulty for this room and you better hope your skills are up to par, because it’s incredibly challenging.

At 10 bucks for 3 levels, the DLC may seem a bit steep, but it’s definitely worth every penny for Bioshock nuts. You’ll also gain access to “New Game Plus”, which allows anyone who’s beaten the game to start a new one with weapons and inventory intact…. good for someone who wants to try their hand at that Survivor mode. There’s also a free premium theme for those of you who like to pretty up your XMB. There are plenty of trophies to obtain from these levels as well, by either clearing the room in a certain amount of time or doing it with certain other restrictions. Good luck beating Worlds of Hurt in under 15 minutes…. I know I can’t do it.

If you already own Bioshock, there’s not enough new stuff here to warrant a 70 buck investment. If you want more out of Rapture, this is your only way to go (so far).

If your only gaming rig is a PS3 and you’ve somehow never played the game before, would you kindly pick this up?